ClearIAS » Indian History Notes » India in 1750 – Decline of the Mughal Empire, Rule of Later Mughals, and Emergence of Successor States 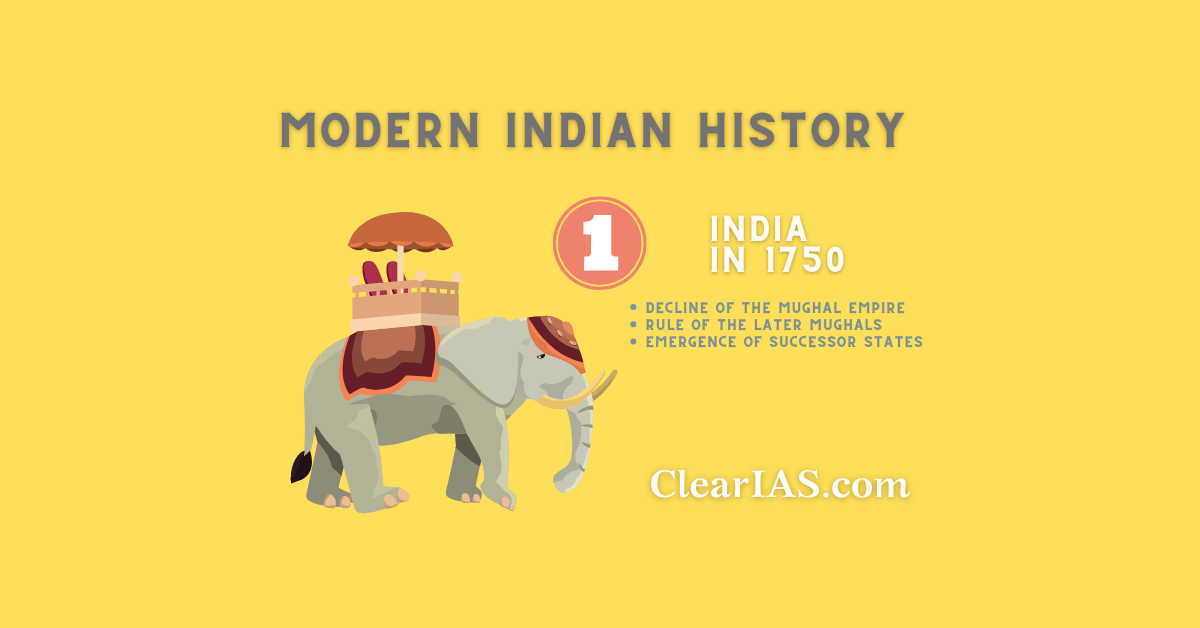 India in the 1750s saw the decline of the Mughal Empire and the emergence of Successor States.

Until 1707, almost the whole of India was under the direct control of the Mughals.

The Mughal rulers who came to power after the death of Aurangzeb (1707), are known as the later Mughals.

Later Mughals were weak and couldn’t hold the vast Mughal empire together. The decline of the Mughal Empire led to the rise of many autonomous states or kingdoms.

Though the Mughals were still the unquestioned masters of the land, their power was waning, especially after Aurangazeb. This is why historians call the Mughals after him the ‘Later Mughals’.

After Aurangazeb died in 1707, his eldest son Bahadur Shah became the emperor following a succession war with his brothers. He was 65 when he ascended the throne.

In the beginning, he tried to exercise more control over Amber and Marwar, but in the end, ended up giving them high mansabs.

He also granted the Marathas the sardeshmukhi of Deccan but failed to give them the chauth. Thus, the Marathas were not fully satisfied.

He also tried to pacify the Sikhs by giving Guru Gobind Singh high mansabs. But later, he also crushed a rebellion by Banda Bahadur, who was Gobind Singh’s successor.

He died in 1712, and the empire plunged into rebellion once again.

It was now that the era of kingmakers in the history of India started.

One of Bahadur Shah’s less able sons, Jahandar Shah won the throne with the help and support of Zulfiqar Khan, the most powerful noble of the time. The prince was the least interested in administration and it passed into the hands of Zulfiqar. His policies, however, were, clever and progressive.

He knew that he had to establish friendly relations with the Rajput rajas and Maratha sardars, and other local clans. Thus, he took the necessary steps towards it. The demands of Marwar and Amber which were not satisfied by Bahadur Shah were addressed. He abolished jizyah. He also granted the Marathas the chauth and sardeshmukhi of Deccan. One of his hated policies was the introduction of irjarah or revenue farming.

When the nobles grew jealous of the position of Zulfiqar Khan, they poisoned the ears of the emperor against him. This led to misunderstandings between them. Finally, Jahandar Shah was defeated at Agra by his nephew Farrukh Siyar.

Farukh Siyar was supported by the Saiyyid brothers – Hussain Ali Khan Barahow and Abdulla Khan. They were made the mir-bakshi and wazir respectively. The fate was the same for this king too, as his ears were poisoned against the nobles. But in the end, the Saiyyid brothers themselves deposed and killed him.

After this, they brought two successive emperors to the crown and both died in quick succession, Muhammad Shah was their next choice.

The Saiyyids adopted the policy of religious tolerance. They brought Hindu chiefs into the administrative fold. They also followed conciliatory policies with other rulers and granted Shahu with swarajya. However, they were considered as namak-haram by the others nobles, who feared for their lives, seeing the fate of the king himself. They conspired against the Saiyyids and treacherously murdered them in 1720.

His reign however continued even after the death of the Saiyyds. In fact, he had a hand in the conspiracy against them. Even though the conditions were favourable for the consolidation of the Mughal empire, he was not the man of the moment. The empire fell into total disarray during his time. This led to the birth of new states, which were created by the deputies of the emperors.

In India, several successor states to the Mughals emerged.

It was founded by Nizam-ul-mulk Asaf Jhah in 1724. Although he was made the wazir of the Mughal empire in 1722 itself, he didn’t believe in a return of the Mughal empire. So, right from 1720, he had strengthened his control over Deccan, though he never laid an independent claim to it.

He waged wars and concluded treaties. He followed a policy of religious tolerance in his state. He died in 1748.

This state was founded by Murshid Khuli Khan and Alivardi Khan.

Even though MKK was the governor there since 1717, he had been its de-facto ruler since 1700. Though he was virtually independent, he regularly sent tributes to the emperor to ensure his seat. He died in 1727 and his son Shuja-ud-din ruled till 1739. In that year, Alivardi Khan killed his son and became the ruler there.

It was during MKK’s rule that land was categorised and khalisah lands were introduced. He also gave agricultural loans called taccavis to the farmers.

It was founded by Saadat Khan Burhan-ul-mulk who was appointed as its governor in 1722.

He carried out a fresh revenue settlement in 1723. He too did not show any religious discrimination. He continued the jagir system. Before his death in 1739, he had become virtually independent and had made his position hereditary.

He was followed by his nephew Safdar Jung who was also a good administrator. Following his predecessor’s policy of religious tolerance, he also employed Hindus in important posts. He ruled till 1754.

The first ruler of Mysore was Hyder Ali who was a petty officer in the Mysore army. He gradually rose through the wars as a leader.

Though illiterate, he was a visionary and realised the importance of western military equipment. He too was religiously tolerant. He died in 1782 and was succeeded by his son Tipu.

Tipu was everything his father was, only better. Taking a great interest in the French revolution, he planted a tree of liberty at Srirangapatanam. He also made a modern navy and incorporated various western weapons into his army.

Perhaps, he is the only Indian ruler who realised the full extent of the threat posed by the British. Though he was orthodox in religious views, he was tolerant of other religions too.

The Economic Condition of India in the 1750s

Mughal India in 1700 accounted for 25 per cent of the world Gross Domestic Product (GDP).

However, India also had 25 per cent of the world’s population.

India’s per capita GDP was only half that of Britain’s in 1600 when the Mughal Empire was at its peak. Thereafter India witnessed a steady economic decline.

The land revenue system at the time of the Mughals was exploitative in nature. The elite class held a major share of national income.

India in 1750, on the eve of the British conquest, had no scientific or technological research, no machinery, and no mechanical tools.

Indian rulers rarely invested in technology when the Europeans were rapidly making progress in science and technology. Indian trade was heavily dependent on textile exports. They were unable to compete with cheaper European cloth.