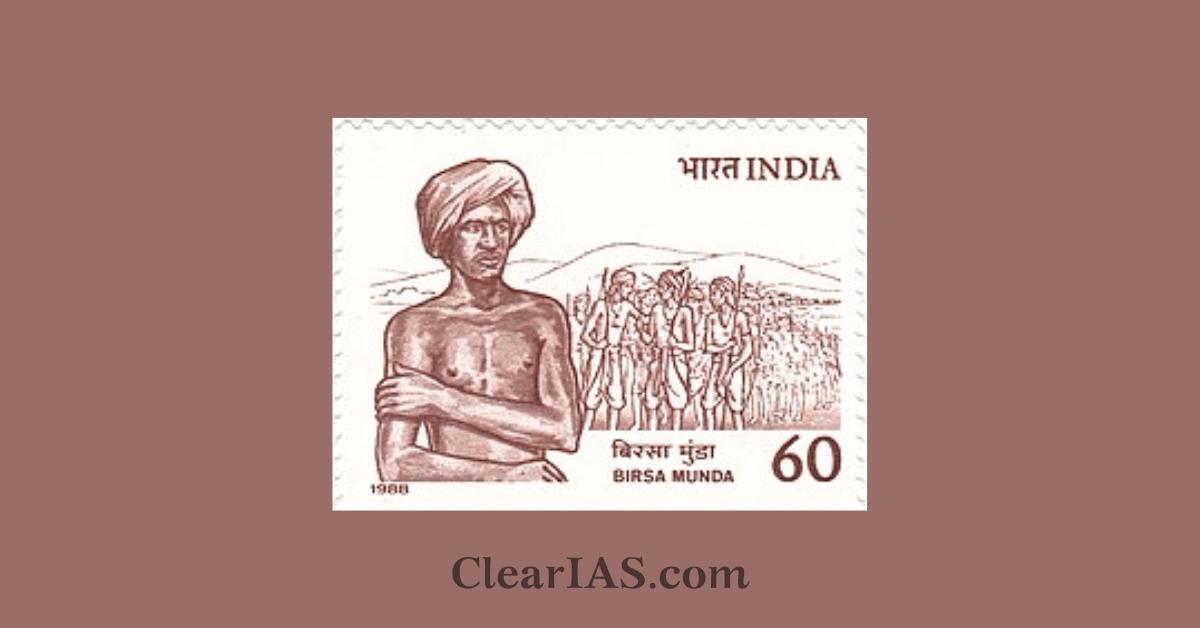 Birsa Munda was one of the earliest tribal reformers whose actions contributed to the freedom struggle as well. Read here to know more about his life.

Birsa Munda was a tribal reformer, religious leader, and freedom fighter belonging to the Munda tribe. He amassed a large religious and informative movement against British rule in the 19th century in the erstwhile Bengal Presidency. Birsa is known for challenging the Christian missionaries and revolting against the conversion activities along with the Munda and Oraon communities.

Birth: November 15, 1875, in Ulihatu village in present-day Jharkhand, in a tribal Munda family.

During this time, the exploitative British Raj had started penetrating the deep jungles of Central and Eastern India, disrupting tribal lives living in harmony with nature.

They also brought in the outsiders (called “dikus” by locals) like moneylenders and contractors, as well as feudal landlords who aided the British in their exploitation.

In addition, the aggressive missionary activity continued with the active support of the Raj, insulting and interfering with the religious and cultural beliefs of Adivasis.

Birsa was also converted into a Christian to join the German Mission School but soon dropped out after finding out that Britishers were aiming to convert tribals to Christianity through education. He later created a faith called ‘Birsait’ and many tribals joined his faith which became a hindrance to British conversion activities.

During the 1880s, Birsa observed the Sardari Larai movement in the region, which demanded the restoration of tribal rights through non-violent methods like sending petitions to the Raj. But the oppressive colonial regime paid no heed to these demands and the zamindari system soon reduced the tribals from landowners to laborers.

Birsa Munda took up the fight for the tribals through the religious domain and stood up against the Christian missionaries. He worked to reform religious practices, discouraged many superstitious rites, brought in new tenets, and prayers, and worked to restore tribal pride.

Birsa emphasized the importance of “sirmare firun raja jai” or “victory to the ancestral king” invoking the sovereignty of the tribals’ ancestral autonomous control over the land. He also stressed monogamy in the later stage of his life.

Birsa became a mass leader and began to be considered Bhagwan and Dharati Aba by his followers. He ignited the minds of the masses- the Mundas, Oraons, other Adivasis and non-Adivasis responded to his call and joined the “Ulgulan” (great tumult) or revolt against the colonial power and exploitative dikus (1899-1900).

Birsa asked the people not to pay any rent and attacked the outposts of feudal, missionary, and colonial authorities.

The tribals of Central and Eastern India waged an effective armed resistance against the British with traditional bows and arrows, but only the real exploiters were attacked, and the common people were not troubled.

Birsa Munda was captured by British police and lodged in jail at the age of 25, where he died in captivity on June 9, 1900.

But Bhagwan Birsa Munda’s spirited struggle did not go in vain as it compelled the British to take action on the plight and exploitation of tribals, which resulted in the Chhota Nagpur Tenancy Act of 1908 for their protection.

This Act restricted the transfer of tribal land to non-tribals and became landmark legislation for the protection of tribal rights. The British regime also took steps to abolish Veth Bigari or forced labor.

Soon after his death, the movement died, but fact remains that he was the one to mobilize the tribal community against the British and forced the colonial authorities to introduce laws protecting the land rights of the tribals.

Other tribal uprisings against colonial rule:

Also read: Popular revolts and uprisings against the British

This took place in Raj mahal hills (present-day Jharkhand) against the British encroachment on tribal lands. The rebellion forced the East India Company to declare their territory autonomous, which was later known as the “Daman-i-Koh” area.

Chuars were the aboriginal tribes of jungle mahal (present-day West Bengal) and they also stood up to English encroachments in their territory.

The Khasis revolted against the construction of a road from Brahmaputra valley to Sylhet by EIC, because this project increased the inflow of outsiders, threatening their tribal autonomy.

The Kols of the Chhota Nagpur area protested against their lands being transferred to outsiders by the English to increase the land revenue.

The Khond, Gumsar, and Kalahandi tribes of eastern ghats (present-day Odisha and Andhra Pradesh) rose against the attempt by the government to suppress human sacrifice (Mariah), the introduction of new taxes by the British, and the influx of Zamindars and sahookars (money-lenders) into their area.

The Bhils were concentrated in the hill ranges of Khandesh in the Maratha territories of Gujarat, Rajasthan, and Madhya Pradesh. British occupation of this region in 1818 brought in the outsiders who dislocated the local community life. Similarly, the Kolis of Ahmednagar district, also challenged the British in 1829 but were quickly subdued by a large army contingent.

Ramosis were the hill tribes of western ghats who were recruited as soldiers in the Maratha army. The main cause of the uprising was their disbanding by the British after the decline of Marathas. The British later pacified the movement by taking them into their armies.

The Santhal, who lived in the area between Bhagalpur and Rajmahal, known as Daman-i-Koh, rose in revolt; made a determined attempt to expel the outsiders (the dikus), and proclaimed the complete end of the foreign regime. The Santhal Paragana tenancy act of 1876 finally made it illegal to transfer Santhal land to a non- Santhal.

The Rampa Rebellion against the British was organized by the tribal people of Visakhapatnam and East Godavari districts to revolt against the foreigners’ encroachment on their lands.

India’s freedom struggle was strengthened by several tribal communities such as Mundas, Oraons, Santhals, Tamars, Kols, Bhils, Khasis, Koyas, and Mizos, to name a few. The revolutionary movements and struggles organized by tribal communities were marked by their immense courage and supreme sacrifice and inspired Indians all over the country.

The government of India is now making sure that the sacrifices of such tribal movements and their leaders are not lost in history.

A portrait of Birsa Munda hangs in the Parliament museum in honor of his fight.

As part of India’s celebration of ‘Azadi Ka Amrit Mahotsav’, the Union Cabinet has approved 15th November as Janjatiya Gaurav Divas to commemorate the brave tribal freedom fighters of the Indian independence movement.

15th November also marks the birth anniversary of Birsa Munda who is revered as God by tribal communities across India.

The Janjatiya Gaurav Divas will be celebrated every year to commemorate the efforts of the tribals in the freedom struggle and the preservation of cultural heritage and the promotion of Indian values of national pride, valor, and hospitality.

A tribal freedom fighter museum at Ranchi would also be inaugurated by the Prime Minister.

The science and technology minister inaugurated Techनींव@75 on Janjatiya Gaurav Divas and highlighted the importance of harnessing the Science & tech innovation (STI) capabilities of communities in nation-building.