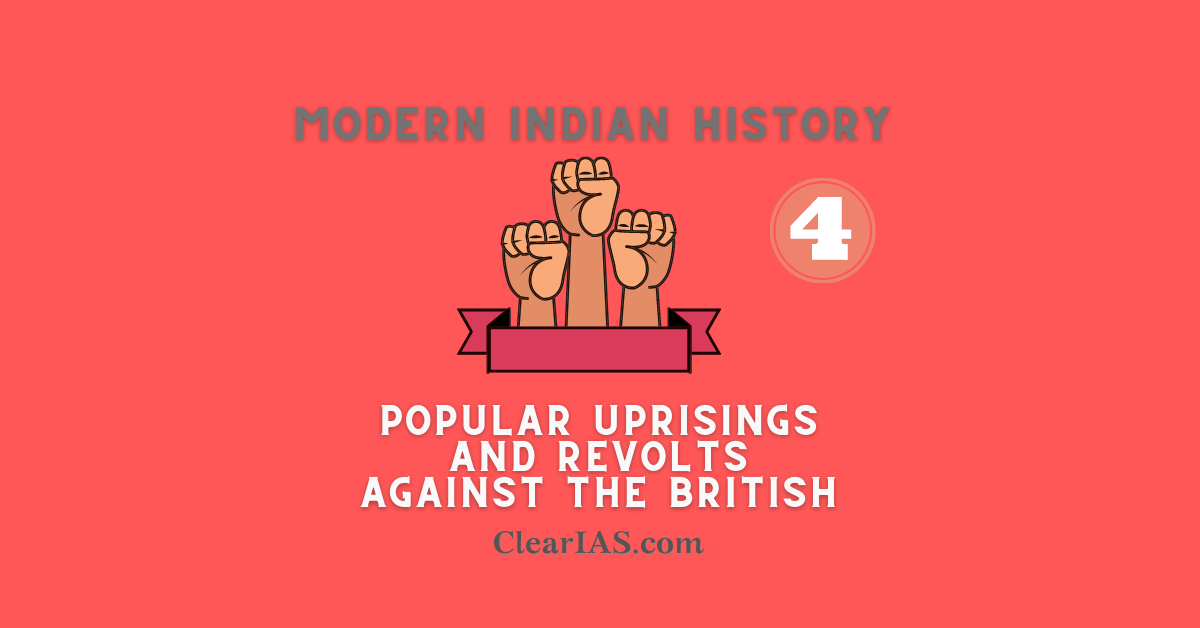 The changes introduced by the British resulted in many uprisings and revolts against the British. Learn more.

In the 6-part framework to study modern Indian History, we have so far covered:

The British as part of their policy to control Indian territories introduced many changes – which influenced the Indian society, polity, and economy. While the positive changes were welcomed by Indians, the oppressive measures resulted in revolts and rebellions.

The Paika Rebellion also called the Paika Bidroha was an armed rebellion against East India Company’s rule in India in 1817.

The Paikas were the traditional militia of Odisha. They served as warriors and were charged with policing functions during peacetime.

The conquest of Odisha by the East India Company in 1803 dethroned the king of Khurda.

The Paika Rebellion was led by Bakshi Jagabandhu, the former Bakshi or commander of the forces of the Raja of Khurda.

The Paikas attacked British symbols of power, blazing police stations, administrative offices, and the treasury during their march towards Khurda.

British were initially taken aback and faced stiff resistance from the rebelling Paikas. However, the Paikas were eventually defeated by the British.

Since the mid-eighteenth century, nawabs and rajas had seen their power getting eroded.

Many ruling families tried to negotiate with the Company to protect their interests.

The Company even began to plan how to bring the Mughal dynasty to an end. The name of the Mughal king was removed from the coins minted by the Company.

In 1856, Governor-General Canning decided that Bahadur Shah Zafar would be the last Mughal king and after his death, none of his descendants would be recognised as kings – they would just be called princes.

In the countryside, peasants and zamindars resented the high taxes and the rigid methods of revenue collection.

The Indian sepoys were unhappy about their pay, allowances and conditions of service. Some of the new rules, moreover, violated their religious sensibilities and beliefs.

After a hundred years of conquest and administration, the English East India Company faced a massive rebellion that started in May 1857 and threatened the Company’s very presence in India.

The changes introduced by the British after the Revolt of 1857

The British had regained control of the country by the end of 1859, but they could not carry on ruling the land with the same policies anymore.

Note: Even the failure of Sepoy Revolt served a grand purpose: a source of inspiration for the national liberation movement which later achieved what the Revolt could not.

The civil rebellions began as British rule was established in Bengal and Bihar, and they occurred in area after area as it was incorporated into the colonial rule.

The major cause of civil rebellions taken as a whole was the rapid changes the British introduced in the economy, administration and land revenue system.

These changes led to the disruption of the agrarian society, causing prolonged and widespread suffering among its constituents.

The ruin of Indian handicraft industries, as a result of the imposition of free trade in India and the levy of discriminatory tariffs against Indian goods in Britain, pauperized millions of artisans. The misery of the artisans was further compounded by the disappearance of their traditional patrons and buyers, the princes, chieftains, and zamindars.

The scholarly and priestly classes were also active in inciting hatred and rebellion against foreign rule.

The suppression of the civil rebellions was a major reason why the Revolt of 1857 did not spread to South India and most of Eastern and Western India. The historical significance of these civil uprisings lies in that they established strong and valuable local traditions of resistance to British rule.

Peasant Movements and Uprisings after 1857

Colonial economic policies, the new land revenue system, the colonial administrative and judicial systems, and the ruin of handicrafts leading to the over-crowding of land transformed the agrarian structure and impoverished the peasantry. When the peasants could take it no longer, they resisted this oppression and exploitation.

The most militant and widespread of the peasant movements was the Indigo Revolt of 1859-60.

A major reason for the success of the Indigo Revolt was the tremendous cooperation, organization and discipline of the ryots. Another was the complete unity among Hindu and Muslim peasants. Leadership for the movement was provided by not just ryots but in some cases by petty zamindars, moneylenders and ex-employees of the planters.

A significant feature of the Indigo Revolt was the role of the intelligentsia of Bengal which organized a powerful campaign in support of the rebellious peasantry. It carried on newspaper campaigns, organized mass meetings, prepared memoranda on peasants’ grievances and supported them in their legal battles.

Missionaries were another group that extended active support to the indigo ryots in their struggle.

The Government’s response to the Revolt was rather restrained and not as harsh as in the case of civil rebellions and tribal uprisings.

During the 1870s and early 1880s, Bengal was facing agrarian unrest, because of efforts by zamindars to enhance rent beyond legal limits and to prevent the tenants from acquiring occupancy rights under Act X of 1859.

This they tried to achieve through illegal coercive methods such as forced eviction and seizure of crops and cattle as well as by dragging the tenants into costly litigation in the courts. The peasants were no longer in a mood to tolerate such oppression.

The main form of struggle was that of legal resistance. There was very little violence — it only occurred when the zamindars tried to compel the ryots to submit to their terms by force.

It was not aimed at the zamindari system. The agrarian leagues kept within the bounds of the law, used the legal machinery to fight the zamindars, and raised no anti-British demands.

So official action was based on the enforcement of the Indian Penal Code and it did not take the form of armed repression as in the case of the Santhal and Munda uprisings.

A major agrarian outbreak occurred in the Poona and Ahmednagar districts of Maharashtra in 1875. Here, as part of the Ryotwari system, land revenue was settled directly with the peasant who was also recognized as the owner of his land.

Peasant resistance also developed in other parts of the country. Mappila outbreaks were endemic in Malabar.

The Kuka Revolt in Punjab was led by Baba Ram Singh.

There was a certain shift in the nature of peasant movements after 1857. Princes, chiefs and landlords having been crushed or co-opted, peasants emerged as the main force in agrarian movements. They now fought directly for their own demands, centred almost wholly on economic issues and against zamindars and moneylenders etc.

Once the specific objectives of a movement were achieved, its organization, as also peasant solidarity built around it, dissolved and disappeared. Thus, the Indigo strike, the Pabna agrarian leagues and the social-boycott movement of the Deccan ryots left behind no successors.

Consequently, at no stage did these movements threaten British supremacy or even undermine it. In this respect, the colonial regime’s treatment of the post-1857 peasant rebels was qualitatively different from its treatment of the participants in the civil rebellions, the Revolt of 1857 and the tribal uprisings which directly challenged colonial political power.

A major weakness of the 19th-century peasant movements was the lack of an adequate understanding of colonialism — of colonial economic structure and the colonial state — and of the social framework of the movements themselves.