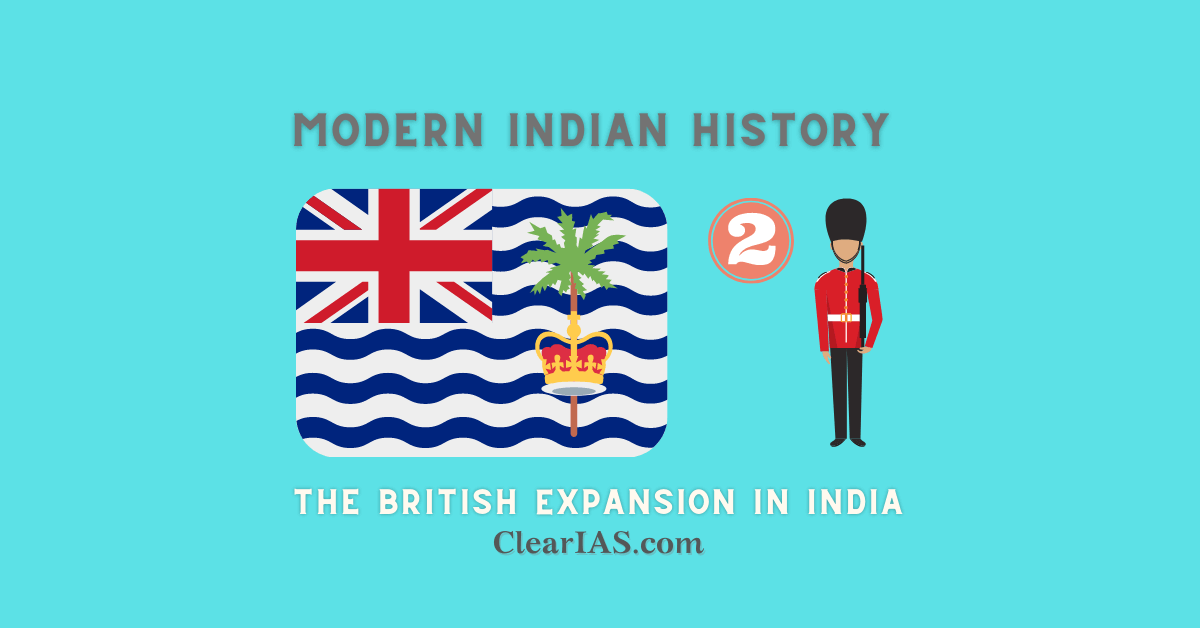 Understand the history of British expansion in modern India. How did the British who came to India for trade become the rulers of territories?

There had been trading relations between India and the west from ancient times itself (land route).

However, in 1453, the Ottoman Turks captured Constantinople and this brought the regular trade routes under the control of the Turks. This urged the Europeans to search for new trade routes, especially by sea.

In 1492, Columbus from Spain set out to reach India and discovered America instead.

Later, in 1498, Vasco Da Gama of Portugal discovered a new trade route, travelling around Africa. He reached India at Calicut, Kerala (1498) acquiring the distinction of being the first European to reach India via the sea route.

The Portuguese were the first to establish colonies in India. Due to their superiority on the seas, they could easily maintain their positions against the powerful land forces in India. Also since they were mainly concentrated in south India, they did not have to face the might of the Mughal empire.

In 1602, the Dutch East India Company was formed, and the people from the Netherlands were empowered by their government to make war, conclude treaties, acquire territories and build fortresses.

Mughal emperor, Jahangir, gave captain Hawkins the royal farman to set up factories on the western coast. Later, Sir Thomas Roe obtained the farman to establish factories in all parts of the Mughal empire.

Bombay passed into the British hands as dowry given by the Portuguese. The British conflicts with the Dutch were settled by giving up all claims to Indonesia.

The conditions in the south were apt for the English. They started from Madras, by building a fort there, called Fort St. George. The problems broke out when the English sacked Hugli and declared war on the emperor. They failed miserably. This was the first lesson they learnt. From then on, they relied on flattery and humble entreaties, waiting for their chance. In 1698, Fort William was built and Calcutta was founded. Madras, Bombay and Calcutta soon grew up to be flourishing centres of trade.

The French, under Dupleix, who had come to India by then had already started interfering in the affairs of the local princes using their well-equipped army. In 1742, a war had broken out in Europe between France and England.

Following the death of the nizam in 1748, his son Nasir Jung took over the crown. He was challenged by Muzaffar Jung, a grandson of the nizam. Similar situations were in the Carnatic, where Chanda Sahib was conspiring against the nawab Anwarudeen. The French took the sides of both the rebels, and won both of their claims for them, killing Anwarudeen and Nasir Jung. The English, naturally took the side of the fallen, under Muhammad Ali, a son of Anwarudeen. The wars were then won by the English side under the able generalship and cunning of Robert Clive. Finally, the French recalled Dupleix from India, according to their treaty in 1754.  Later, in 1760, the French were completely destroyed at the battle of Wandiwash. Thus, the English remained the sole masters of India.

The farman granted to the British by the emperor enabled them to conduct free trade in Bengal. Neither did they have to pay dastaks for the movement of such goods. However, these were misused by the company’s servants and this meant the loss of revenue for Bengal. In 1756, the grandson of Alivardi Khan, Siraj-ud-Daulah came to the throne, he demanded the English that they should trade on the same basis as the Indian merchants. Matters took a turn for the worse when the English refused and strengthened their fortifications. This led to the Battle of Plassey in 1757, in which Siraj-ud-Daulah was treacherously defeated by the cheating by Mir Jaffar and Rai Durlabh. This brought the British immense prestige and revenue.

Later, when Mir Jaffar couldn’t keep up with the tribute promised to the British, they installed Mir Qasim on the throne. He was clever and knew that both revenue and an army was required to stand against the British. And finally, he abolished all the duties on internal trade. This angered the British, and they defeated Mir Qasim in the Battle of Buxar in 1764.

How did the British who came to India for trade become the rulers of territories?

How the trade led to battles?

The Battle of Plassey

Conflict with the Marathas

The claim to paramountcy

The Doctrine of Lapse

Setting up a New Administration

Role of Governor Generals in the British conquests

We shall try to understand what happened after Plassey and Buxar. The two battles made the Brits unquestioned champions of the land, but they still had obstacles to pass. These were the small states throughout the territory of India. The way some of the governors-general handled the situation and finally made the British the sole power in India is worth understanding.

We begin with Robert Clive (1765-72) who was given a second chance following his outstanding military leadership. He introduced a system known as ‘dual administration’ in Bengal. The company already had the power to collect its own taxes. Thus it was the diwan. Now, with the say in the appointment of the deputy subahdar, the company got the de-facto ownership of the nizamat too. Thus, in effect, the company had power without responsibility.

It was also during Clive’s time that the taxation in Bengal became so favourable to the British that they stopped bringing money from England to buy Indian goods. Instead, they invested the revenue they received from Bengal in buying Indian goods itself. Then they sold it in foreign countries. These were called the ‘investments’ of the company in India.

The next was Warren Hastings (1772-85), who had ‘war’ in his name itself. The interference in others’ territories continued. Initially, he fought Mysore with the help of the Nizam, and later intervened in the internal politics of the Marathas, by siding with Raghunath Rao, against the infant Peshwa Madhav Rao 2, who was represented by Nana Phadnis. This long Anglo-Maratha war lasted from 1775 to 1782. It was at this time that he had to face the combined forces of the Marathas, the Nizam, and Mysore. But through tactics and turning one ruler against another, he fought his way through. In the first Anglo-Maratha war, the British couldn’t do much. In the end, the treaty of Salbai was signed which maintained the status quo and gave them ample time to recover. This enabled them to fight with Hyder, in which they were helped by the Marathas.

War with Haider Ali started in 1780. Though Haider won initially, Hastings’ cunning tactics helped the British in choking out deals with Nizam and the Marathas through the cessation of territories. In 1781, Haider Ali was defeated by Eyre Coot and later died in 1782. His son Tipu carried on the fight from 1789 but was defeated in 1792. Half of his treaties were ceded by the treaty of Seringapatanam.

Wellesley (1798-1805) was the next important Governor-General. By 1797, Mysore and Marathas were weakened in power. He knew it was the ripe time for rapid expansion. He followed the policy of ‘Subsidiary alliances’, outright wars, and assumption of territories of previously subordinated rulers. You know what the theory of a subsidiary alliance is. It was described as “a system of fattening allies as we fatten oxen, till they were worthy of being devoured”. The first was the Nizam in 1798 and 1800. Then came the Nawab of Awadh in 1801.

All this time, Tipu was strengthening himself. He had also asked for French help. But in 1799, before the French help could reach him, he fought a fierce war and died.

At this time, the Marathas were a confederacy of five factions namely the Peshwa (Poona), Gaekwad (Baroda), Sindhia (Gwalior), Holkar (Indore), and Bhonsle (Nagpur). Though Peshwa was the nominal head, these factions were constantly at war. When Peshwa Baji Rao 2 was defeated by Holkar, he took the treaty of Subsidiary alliance. Even then, it would have been really difficult for the British to defeat them, only if they stood together. But even in the face of imminent danger, they didn’t unite. Thus, one or more factions stood and watched when another one fought the British and were defeated one by one.

However, the expansionist policy of Wellesley was proving too costly to the government. Hence, he was recalled from India.

The next Governor-General was Hastings (1813-1823). The Marathas decided to push one last time. They united to form a small group, but by now, it was too late. They were easily defeated. The Peshwas territories were annexed to the Bombay presidency. To satisfy them, a small kingdom of Satara was given to Shivaji’s descendant who ruled it under the British.

Thus, by 1818, the entire subcontinent, except Punjab and Sind was under the British. They completed this task by 1857. The growing Anglo-Russian rivalry in Europe and Asia caused the fear of a Russian attack from the North-West. Sind was a friendly state to the British. Still, in 1843, Charles Napier conquered it. He later wrote, “We have no right to seize Sind, yet we shall do so, and a very advantageous, useful humane piece of rascality it will be”.

Dalhousie (1848-1856) was the next Governor-General. He introduced the Doctrine of lapse, by which he annexed many small states like Satara in 1848, Nagpur and Jhansi in 1854, etc. This was a major cause of the Great revolt of 1857. He also wanted to conquer Awadh, but his doctrine wouldn’t work there because the Nawab had many heirs. Thus, he accused him of having misgoverned the state, and annexed it on that pretext, in 1856.