ClearIAS » Civil Services Mains » Cadre Allocation Policy for IAS/IPS/IFoS – Will You Get Posted in Your Home State? 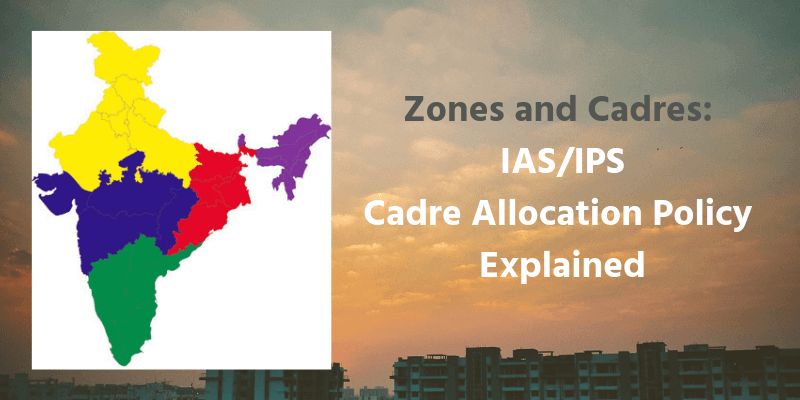 What is a cadre?

Cadre refers to a state (or group of states/union territories) to which an officer of an All India Service like IAS or IPS may be posted. Examples include UP cadre, Bihar cadre, Kerala cadre, AGMUT cadre etc.

Usually, an IAS/IPS officer works in his allocated cadre (state) through-out his entire service life, unless he opts for central government deputation – where he works at the Centre.

A cadre is allocated to a candidate by the Department of Personnel and Training (DoPT), Government of India.  Allocation of cadre depends on candidate’s rank, cadre-preference, and vacancies.

What is the new method of Cadre Allocation?

The existing 26 cadres of All-India Services — the Indian Administrative Service (IAS), Indian Police Service (IPS) and Indian Forest Service (IFoS) — have been divided into five zones as per the new Cadre Allocation Policy, 2017.

Under the new policy, candidates can only select one cadre from a zone as their first choice. Their second, third, fourth and fifth choices have to be from a different zone. For example, if the first preference of a candidate is Uttar Pradesh (Zone 2), then he cannot select Bihar, Jharkhand or Odisha as the second choice (other cadres in Zone 2). You can read more details about the new policy here.

What is the major impact of the new cadre allocation policy?

Before 2017, even if one may not get the home-cadre, there was a high chance that he/she may get an allocation in the neighbouring states. However, after the new cadre allocation policy, selected candidates can be allocated to cadres far away. By doing this, Government of India hopes for better national integration.

“Will I get my home state as my cadre, after selection into IAS or IPS?”

You may or you may not.

It depends on your rank, your category, and the number of insider-vacancies for the post in your category in your home state.