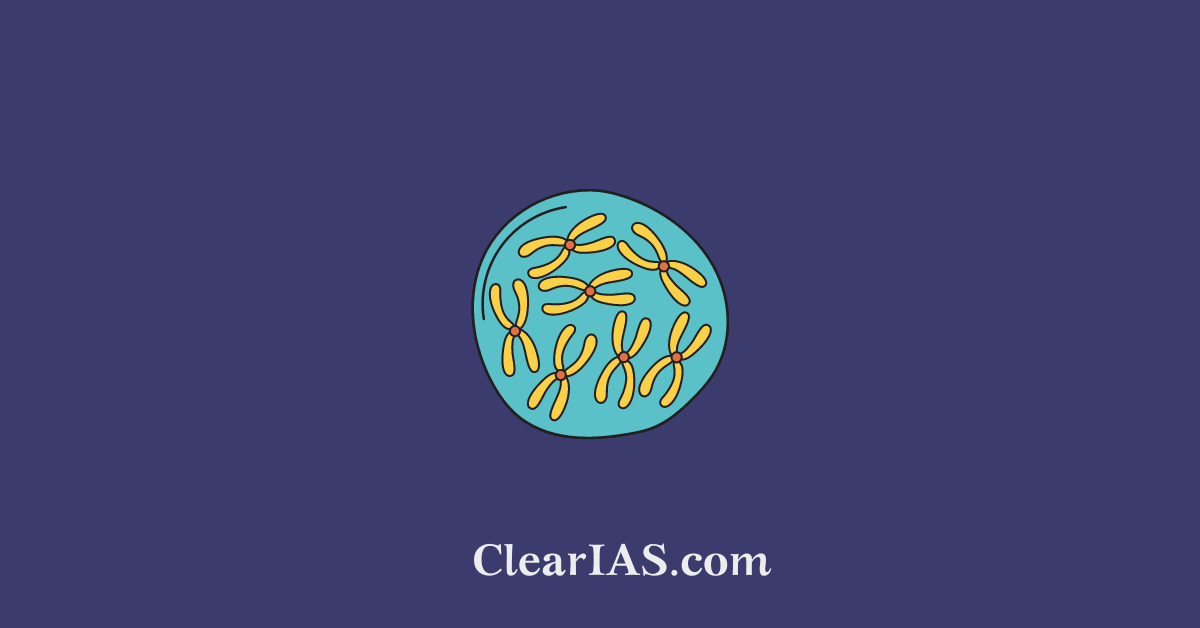 The human chromosome is the fundamental unit of life and one of the most crucial parts of the cell to be passed down from one generation to the next. It consists of a single chain of DNA that has been coiled and supercoiled to form thick thread-like sections. Read here to understand more about chromosomes and chromosomal disorders in humans.

Chromosomes are thread-like structures located inside the nucleus of animal and plant cells.

Each chromosome is made of protein and a single molecule of deoxyribonucleic acid (DNA). Passed from parents to offspring, DNA contains the specific instructions that make each type of living creature unique.

The term chromosome comes from the Greek words for colour (chroma) and body (soma). Scientists gave this name to them because they are cell structures, or bodies, that are strongly stained by some colourful dyes used in research.

Without such packaging, DNA molecules would be too long to fit inside cells!

For example, if all of the DNA molecules in a single human cell were unwound from their histones and placed end-to-end, they would stretch 6 feet.

What is a chromosome? 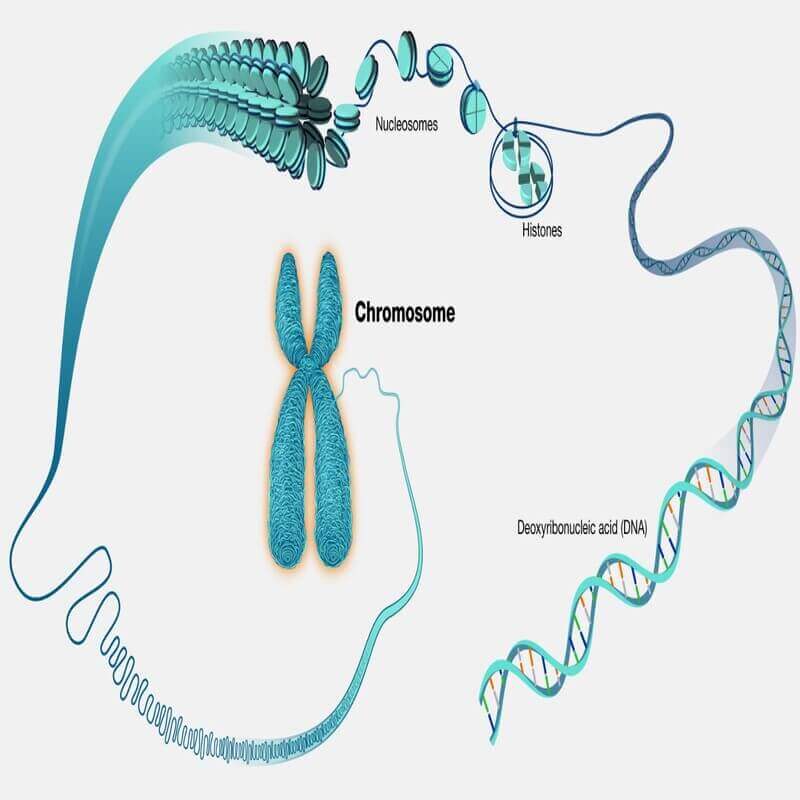 Chromosomes are threadlike structures made of protein and a single molecule of DNA that serve to carry the genomic information from cell to cell.

In plants and animals (including humans), these reside in the nucleus of cells.

Humans have 22 pairs of numbered chromosomes (autosomes) and one pair of sex chromosomes (XX or XY), for a total of 46.

They can be seen through a microscope when the nucleus dissolves during cell division.

They vary in number and shape among living organisms.

Each species of plant and animal has a set number of chromosomes.

In humans, the twenty-third pair is the sex chromosomes, while the first 22 pairs are called autosomes.

These are also different in size.

The only human cells that do not contain pairs of chromosomes are reproductive cells, or gametes, which carry just one copy of each chromosome.

Besides the linear chromosomes found in the nucleus, the cells of humans and other complex organisms carry a much smaller type of chromosome similar to those seen in bacteria.

What do chromosomes do?

Cells must continuously divide to make new cells and replace damaged or old ones for an organism to grow and function normally.

DNA must be intact and distributed equally among cells during cell division.

In the vast majority of cell divisions, DNA is accurately copied and distributed thanks in large part to chromosomes. Nevertheless, mistakes do happen from time to time.

Serious issues could arise if the number or structure of chromosomes in new cells changes. One type of leukemia and a few other cancers, for instance, are brought on by faulty ones, which are made up of linked fragments of damaged chromosomes in humans.

Furthermore, it is essential that reproductive cells, such as eggs and sperm, have the appropriate amount of chromosomes and the right kind of structure. If not, it’s possible that the offspring won’t grow up properly.

How are chromosomes inherited?

One copy of each chromosome is inherited from the female parent and the other from the male parent in humans and the majority of other sophisticated creatures. This explains why some traits are passed down through the mother and others through the father.

The tiny circular chromosome found in mitochondria has a distinct inheritance pattern.

Chromosomal disorders result from structural changes or numerical changes. Chromosomal aberrations are disruptions in the normal chromosomal content of a cell and are a major cause of genetic conditions or disorders in humans.

Abnormalities of development occur because of the unusual genetic signals transmitted by the chromosomes. One of these imbalances occurs in 0.5 percent of all births.

An abnormality may be numerical or structural and examples are described below: 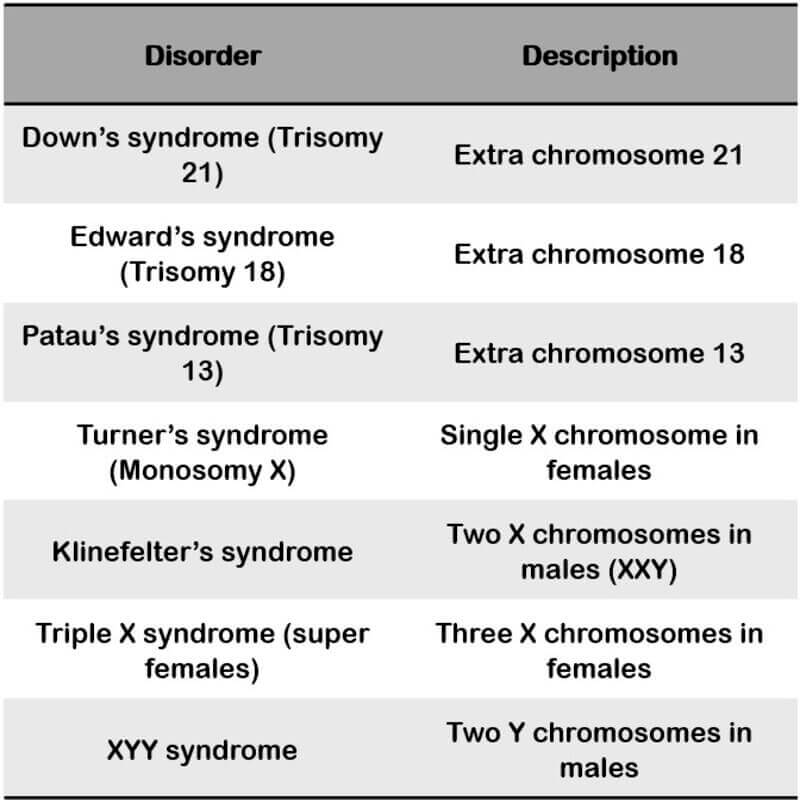 Normally humans have 23 pairs, giving a total of 46 chromosomes in each cell, called diploid cells. A normal sperm or egg cell contains only one-half of these pairs and therefore 23 chromosomes. These cells are called haploid.

Aneuploidy refers to the presence of an extra or a missing chromosome and is the most common form of abnormality. 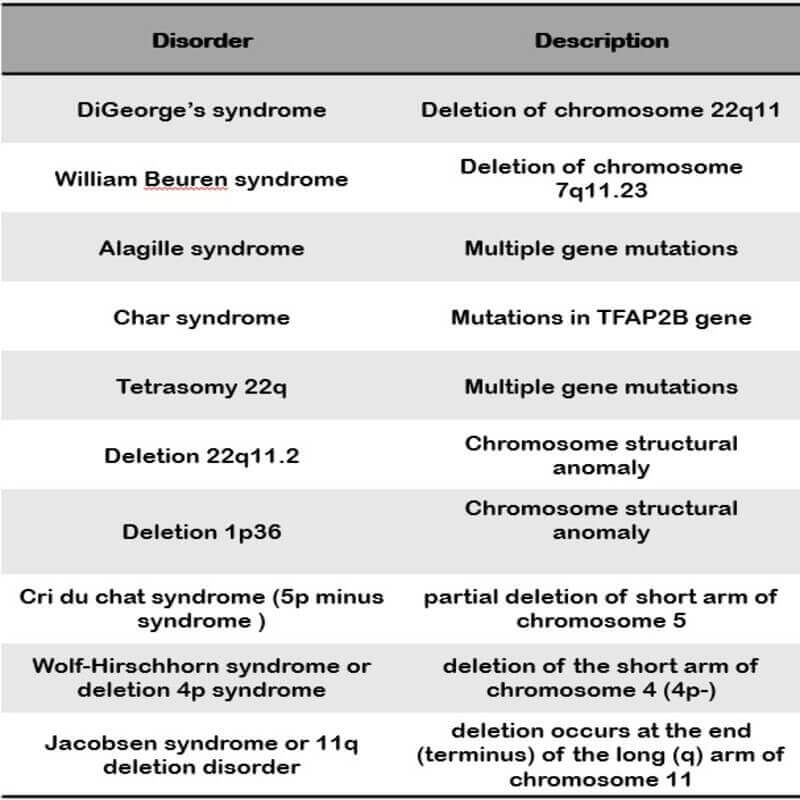 Structural abnormalities occur when the chromosomal morphology is altered due to an unusual location of the centromere and therefore abnormal lengths of the chromosomal short (p) and long arm (q).

Deletion: A portion of the chromosome is lost during cell division. The resulting chromosome lacks certain genes, that get inherited by offspring. This condition is usually lethal due to missing genes.

Duplication: The presence of part of a chromosome in excess is known as duplication. If the duplication is present only in one of the homologous pairs, the duplicated part makes a loop to maximize the juxtaposition of homologous regions during pairing.

Inversion: Inversion results from the breakage and reunion of a part of the chromosome rotating by 180° on its axis. So there occurs a rearrangement of genes. Its effects are not as severe as in other structural defects.

Translocation: The shifting or transfer of a set of genes or part of a chromosome to a non-homologous one is known as translocation. There is no addition or loss of genes, only the rearrangement occurs.