Citizenship Amendment Act 2019 (CAA) passed by the Indian Parliament has resulted in nationwide protests as many felt the new provisions added by the Central Government are discriminatory in nature.

The Citizenship Amendment Act 2019 is intended to help illegal migrants who came to India before 31-12-2014 – from Afghanistan, Pakistan and Bangladesh – apply for Indian citizenship via a faster route if they belong to Hindu, Christian, Sikh, Jain, Parsi or Buddhist religious beliefs.

Muslims are not listed in the act.

Citizenship Amendment Act 2019: Why are people opposing it?

Those who oppose the CAA feel that the new provisions are against the secular foundations of the Indian Constitution. They believe the Amendments made are ethically wrong.

There are also apprehensions in some sections that the Citizenship Amendment Act 2019, followed by the National Register of Citizens (NRC) is to alter the voters’ profile and majority sentiments in favour of the ruling party.

Natives of north-east India, who are most affected by the problems of illegal migration, are against the whole idea of giving citizenship to illegal migrants, irrespective of their religion.

Ministry of Home Affairs (MHA) has released a clarification of the Central Government on the issue. The questions and answers published by the Press Information Bureau (PIB) are reproduced below.

Does the CAA affect any Indian citizen?

Who does the CAA apply to?

It is relevant only for Hindu, Sikh, Jain, Buddhist, Parsi and Christian foreigners, who have migrated from Pakistan, Bangladesh, and Afghanistan into India up to 31.12.2014, on account of persecution faced by them due to their religion. It does not apply to any other foreigners, including Muslims migrating to India from any country, including these three countries.

How does it benefit Hindu, Sikh, Jain, Buddhist, Parsi and Christian foreigners hailing from these three countries?

If their travel documents like passport and visa are not in order or are not available, they can apply for Indian citizenship if they were persecuted back home. The CAA creates this legal right for such migrants. Secondly, they get a faster route for Indian citizenship through the Naturalisation Mode. The minimum residency requirement in India would be only 1+5 years instead of 1+11 years as applicable for all other categories of foreigners.

Does this mean that Muslims from Pakistan, Bangladesh, and Afghanistan can never get Indian citizenship?

No, the present legal process of acquiring Indian citizenship by any foreigner of any category through Naturalization (Section 6 of the Citizenship Act) or through Registration (Section 5 of the Act) stays operational. The CAA does not amend or alter it in any manner whatsoever. Hundreds of Muslims migrating from these three countries have been granted Indian citizenship during the last few years. If found eligible, all such future migrants shall also get Indian citizenship, irrespective of their numbers or religion.

In 2014, after the settlement of Indo-Bangladesh boundary issues, 14,864 Bangladeshi citizens were given Indian Citizenship when their enclaves were incorporated into the territory of India. Thousands of these foreigners were Muslims.

Will illegal Muslim immigrants from these three countries be deported under the CAA?

No, the CAA has absolutely nothing to do with the deportation of any foreigner from India. The deportation process of any foreigner irrespective of his religion or country is implemented as per the mandate of the Foreigners Act, 1946 and/or The Passport (Entry into India) Act, 1920. These two laws govern entry, stay movement within India and exit from India of all foreigners irrespective of their religion or country.

In Assam, the process of deportation happens only after the determination of such a person as a “foreigner” under The Foreigners Act, 1946. Then he becomes liable for deportation. Therefore, there is nothing automatic, mechanical or discriminatory in this
exercise. The state governments and their district-level authorities enjoy the power of Central Govt. under Section 3 of the Foreigners Act and Section 5 of The Passport (Entry into India) Act, 1920 to detect, detain & deport any illegal foreigner.

Can Hindus facing persecution on grounds of religion in countries other than these 3 countries apply under the CAA?

No, they will have to apply through the usual process to get Indian Citizenship just like any other foreigner for either registration or naturalization as a citizen of India. They would get no preference under The Citizenship Act, 1955, even after the CAA.

Does the CAA also cover other forms of persecution – on grounds of race, gender, membership of a political or social group, language, ethnicity etc.?

No, the CAA is a very focused law that deals specifically with foreigners of six minority community groups hailing from three neighbouring countries that have their distinct state religion. Any foreigner persecuted abroad on any account may apply for registration or naturalization as a citizen of India like any other foreigner if he fulfils the minimum qualifications laid down in The Citizenship Act, 1955.

The CAA will gradually exclude Indian Muslims from the citizenship of India?

What are the rules for citizenship under CAA?

Appropriate rules under the CAA are being framed. They will operationalize various provisions of the CAA.

Government of India has also released MythBusters in connection with CAA and North-East India. 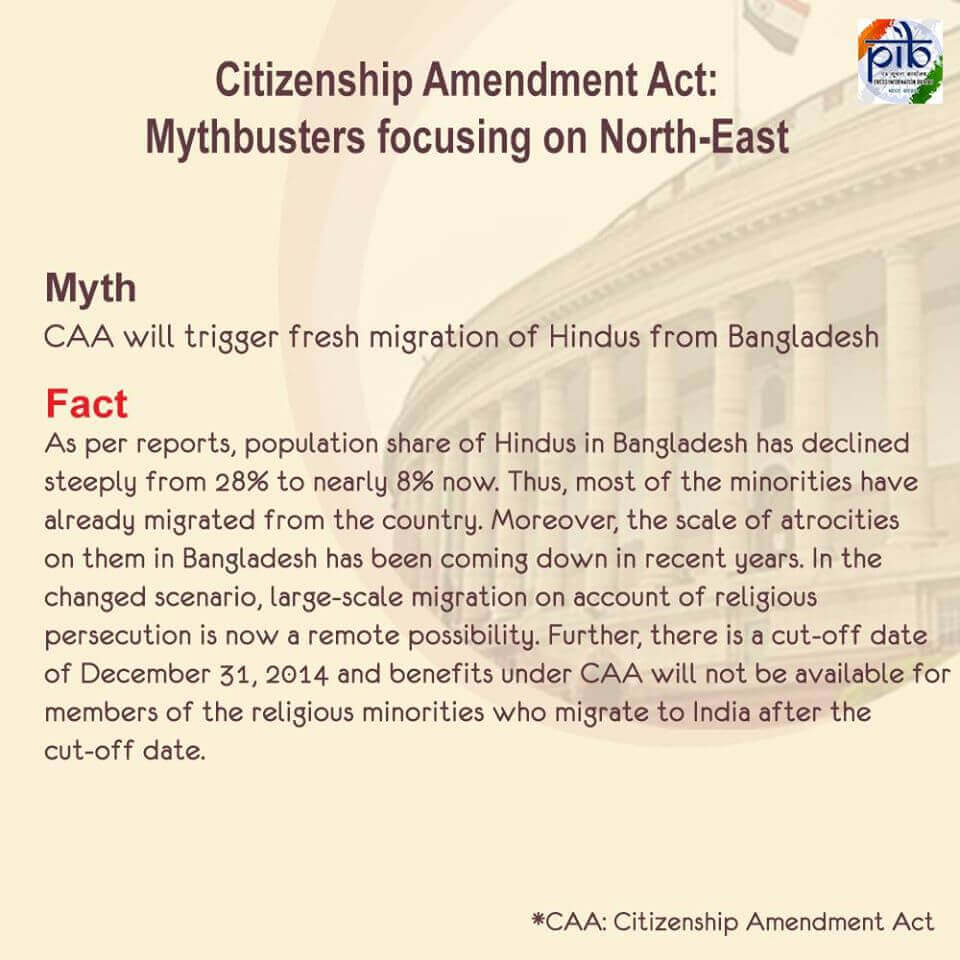 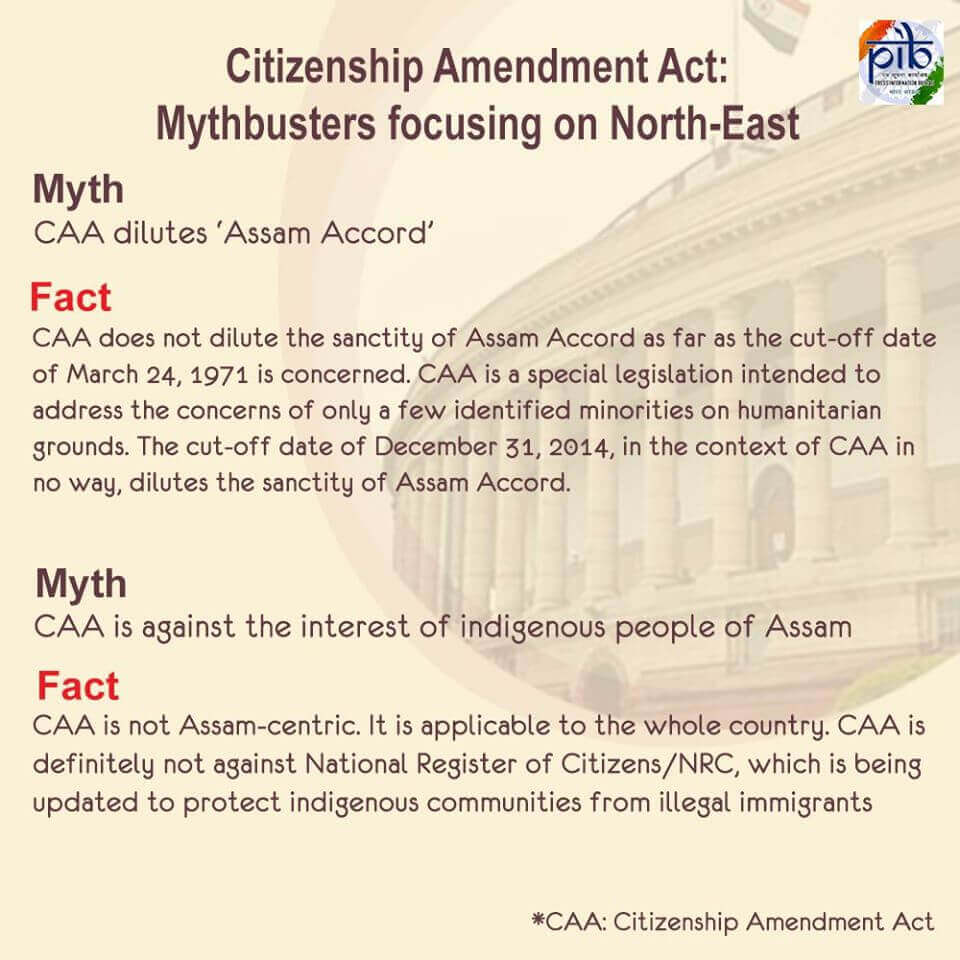 Citizenship Amendment Act 2019: What is your opinion about CAA? 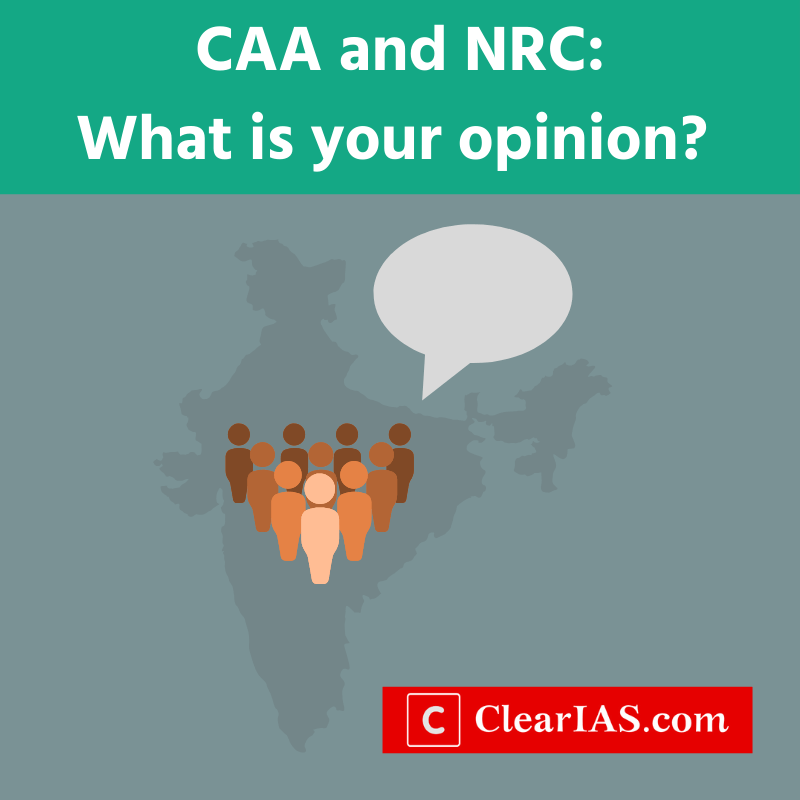 Do you agree with the logic of the Central government behind CAA and NRC?

As a UPSC aspirant, or a citizen of India, what is your opinion about the new amendments made to the Indian Citizenship Act of 1955?

Should refugees and illegal migrants be treated equally?

Should there be a nation-wide NRC, as announced by the Central Government of India? Considering the cost incurred in Assam (the first state where it was conducted), will it drain the financial and human resources of this country? Is the whole exercise of CAA and NRC necessary?

Are CAA and NRC diversion-tactics by the government to take attention from the real problems of the country like economic slow-down, unemployment, and price-rise – as pointed out by many?

We at ClearIAS.com believe in diverse viewpoints and democratic debates. For that, you need the right information. With this information, you should analyse both sides of an issue – without any bias. Once that is done, you will be able to take a stand.

In the case of CAB, we have already presented both-sides in one of our previous articles.