ClearIAS » Current Affairs Notes » National Population Register (NPR) – How is it different from the National Register of Citizens (NRC)? 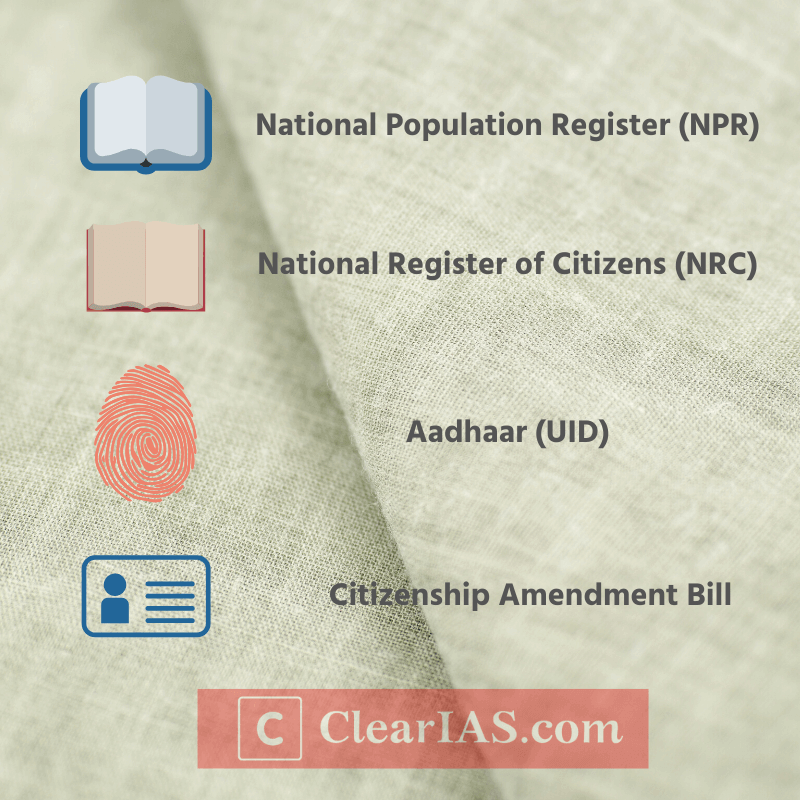 Do you know the difference between the National Population Register (NPR) and National Register of Citizens (NRC)?

Recently, there has been at least 4 confusing words in news connected with citizenship and identity.

However, there are not many who know the conceptual difference between the terms.

We, in this article, try to explain the concepts in layman terms.

The National Population Register (NPR) is a register of the usual residents of the country.

It is mandatory for every usual resident of India to register in the NPR.

The database under the NPR will be maintained by the Registrar General of India and Census Commissioner of India, Ministry of Home Affairs.

The NPR database contains demographic as well as biometric details.

As per the provisions of the NPR, a resident identity card (RIC) will be issued to individuals over the age of 18. This will be a chip-embedded smart card with the UID number (Aadhaar) printed.

The new and latest NPR is planned to be conducted across India (except Assam) between April 1, 2020, and September 30, 2020 along with next census enumeration.

NPR is not a citizenship enumeration drive; it would also include a foreigner staying in an area for more than six months.

NPR is the prelude to the NRC.

NRC is a verified digital register having names and basic demographic information about all Indian citizens in a digital format.

A person born in India or having Indian parentage or having resided in India for at least 11 years, is eligible for Indian citizenship.

Union Government has recently announced that NRC will be implemented across all states in India.

The register was first prepared after the 1951 Census of India and since then it has not been updated until recently. The North-East Indian state of Assam has become the first state in India where the updating of the NRC is being taken up.

NRC would be India’s first such database of citizens.

While NPR will include details of foreigners who are residing in India for a period of 6 months or more, NRC will contain details of only the citizens of India. Hence, NRC can be said to be a subset of the National Population Register (NPR).

Aadhaar is a verifiable 12-digit identification number issued by the Unique Identification Authority of India (UIDAI) to the residents of India for free of cost.

The Aadhaar number on its own does NOT provide citizenship. It is just a unique number based on your biometric data.

It is compulsory for all Indian residents to register with the NPR, while registration with the UIDAI is considered voluntary.

Aadhar equips the holder to avail certain services offered by the government. If the resident wishes to avail those services, he should register for the Aadhar. Otherwise, he can opt-out of Aadhaar.

The Citizenship Amendment bill seeks to amend the Citizenship Act, 1955, and grant citizenship to Hindu, Sikh, Buddhist, Jain, Parsi and Christian immigrants from Pakistan, Bangladesh and Afghanistan who have illegally migrated into India.

The Bill also seeks to reduce the requirement of 11 years of continuous stay in the country to six years to obtain citizenship by naturalisation.

Some opposition parties have maintained that the move violates Article 14 of the Constitution through religious discrimination, as illegal migrants of the Muslim community are not given the citizenship status. The Act doesn’t have a provision for Muslim sects like Shias and Ahmediyas who also face persecution in Pakistan.

The Union Government is planning to introduce the Citizenship Amendment bill before implementing the National Register of Citizens.

The recent exercise of NPR is connected with Census 2021, however, there are differences between the two.

The census is a macro exercise where the data is protected by the confidentiality clause. Census is not intended to identify the individual identity details, while the NPR, on the other hand, is designed to collect identity details of every individual.

The 2021 census would conclude on March 1 midnight. A revisional round would be conducted between March 1, 2021, and March 5, 2021, to include who are left from the exercise.

Points to note regarding NPR, NRC, and Aadhaar:

UPSC Question from the topic: Aadhaar vs NPR

CSE Main Exam 2014) Two parallel run schemes of the Government, viz the Adhar card and NPR, one of voluntary and the other as compulsory, have led to debates at national levels and also litigations. On merits, discuss whether or not both schemes need run concurrently. Analyse the potential of the schemes to achieve development benefits and equitable growth.

Why is this topic important?

Union Home Minister, Amit Shah had told the Rajya Sabha that the National Registry of Citizens (NRC) will be implemented throughout the country (November 20, 2019).