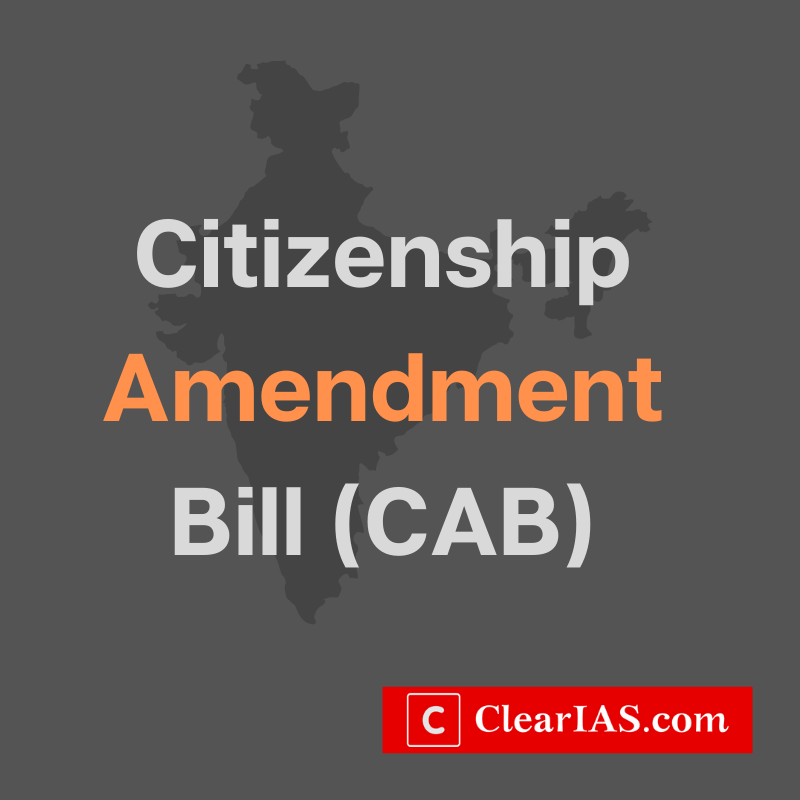 What is Citizenship Amendment Bill or CAB?

Why is CAB controversial?

The Citizenship Amendment Bill (CAB) is a bill introduced by the Central Government in the Parliament of India in 2019 to primarily amend the Citizenship Act of 1955.

The main purpose of the bill is to make certain religious communities of illegal migrants or refugees eligible for Indian citizenship – in a fast-track manner.

The Bill, among other things, seeks to grant citizenship to Hindus, Sikhs, Jains, Parsis, Buddhists and Christians who migrated to India till the end of 2014 from countries like Pakistan, Bangladesh and Afghanistan, due to reasons like persecutions. 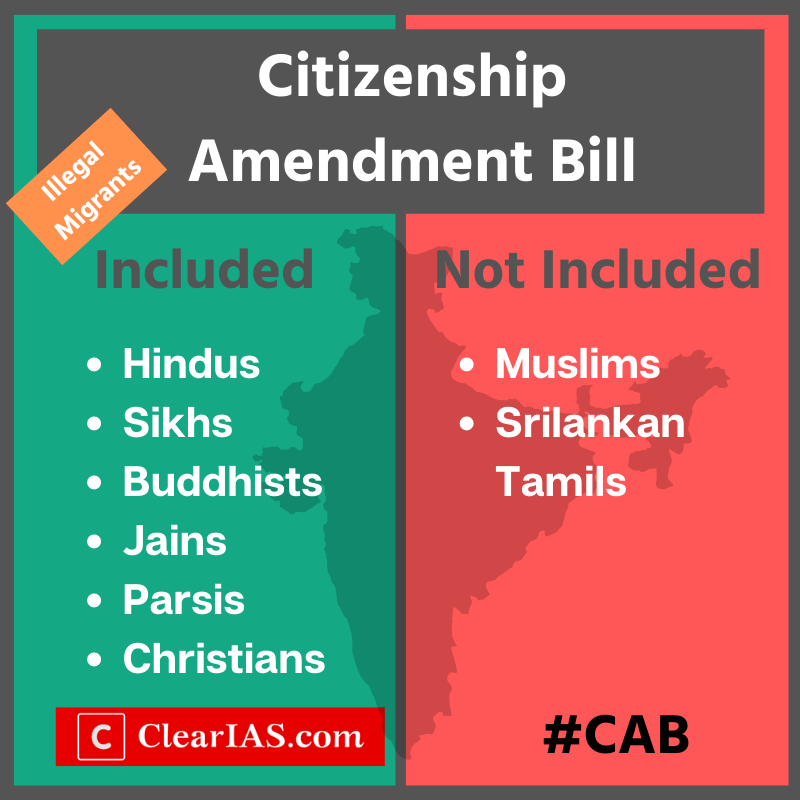 The Stand of the Government regarding CAB

The Central government is of the opinion that the bill is not discriminatory against Muslims. As the Citizenship Amendment Bill has not amended the original provisions, any foreigner, including a Muslim, can still apply for Indian citizenship under the normal process of naturalisation. However, it may take 11 or more years to get Citizenship in this route.

The strong advocate of the Citizenship Amendment Bill (CAB) 2019, Amit Shah, Home Minister of India, connected the 2-nation theory which led to the division of India with the new bill. As per him, as the two nations – India and Pakistan – are created on the basis of religion, CAB turned a necessity now.

Home Minister also cited the Nehru-Liaquat pact. As per him, Nehru-Liaquat pact failed to achieve its objectives in protecting minorities in Pakistan and Bangladesh. Pakistan, Bangladesh and Afghanistan have declared Islam as their State Religion. However, there are religious persecutions of minorities in these countries. Home Minister pointed out the declining minority population in the three neighbouring countries.

The CAB legislation, as per the Union Government, will give bring a new light into the lives of the people who were facing religious persecution in neighbouring countries.

As per the government, the bill does not violate any provisions of the Constitution including Article 14.

Note: You can read more about the Government’s clarification on CAA here.

Three flaws in the logic of the Central Government

Thus clearly, the bill is highly selective. CAB is intended to select some communities and omit others.

The Centre has been trying to implement both the Citizenship Amendment Bill (CAB) and the National Register of Citizens (NRC). There are protests regarding the implementation of both.

Let us see what are the differences between CAB and NRC.

NRC is a verified digital register having names and basic demographic information about all Indian citizens in a digital format.

The names of all persons born in India or having Indian parentage or having resided in India for at least 11 years, will be mentioned as Indian Citizens in the National Register for Citizens (NRC).

The NRC in Assam

The process of NRC started at first in the state of Assam. The National Register of Citizens or NRC in Assam targeted illegal immigrants. A person had to prove that either they or their ancestors were in Assam on or before March 24, 1971.

A total of 3.3 crore people who had applied for inclusion in the document. However, the final version of the NRC (as on August 31) contained the names of only 3.11 crore people. About 19 lakh people were not included in the NRC. The people who failed to prove citizenship were not only Muslims but also Hindus.

Not all omitted from NRC in Assam were illegal migrants from Bangladesh, but migrants from neighbouring states. Union Government plans to extend NRC to the rest of India soon – in a move to seek more clarity on the same.

However, the Citizenship Amendment Bill 2019 may help non-Muslims in Assam left out of the NRC to get the citizenship of India – without further hurdles. The bill is silent about Muslims.

Acts which the CAB amend:

The Bill also proposes to incorporate a sub-section (d) to Section 7, providing for cancellation of Overseas Citizen of India (OCI) registration where the OCI card-holder has violated any provision of the Citizenship Act or any other law in force.

Concerns of the North East Region of India

Northeast people are immensely worried about the possible demographic changes the Citizenship (Amendment) Bill could cause in the region. The Northeast region has long battled migration from Bangladesh.

The natives of North-east are fiercely opposed to any ‘outsider’ settling in. Protests have already broken out over the fears that the Citizenship (Amendment) Bill could end up destroying the culture and ethnicity of the region.

Exceptions to the Bill

CAB won’t apply to areas under the sixth schedule of the Indian Constitution – which deals with autonomous tribal-dominated regions in Assam, Meghalaya, Tripura and Mizoram.
The bill will also not apply to states that have the inner-line permit regime (Arunachal Pradesh, Nagaland and Mizoram).

Status of the Citizenship Amendment Bill

The Union Cabinet cleared the Bill on 4 December 2019. It was passed by the Lok Sabha on 10 December and Rajya Sabha on 11 December.

In Lok Sabha, the  Bill was passed 311-80, with zero abstentions after the Opposition put up a spirited attack against it.

In Rajya Sabha, 125 votes were cast in favour and 105 against the bill.

However, the CAA is not effective yet. It is to be notified by the government on a date chosen by it.

The chief opposition to the Citizenship (Amendment) Bill is that it discriminates on the basis of religion by identifying only non-Muslims refugees as those who would be eligible for Indian citizenship.

While any foreigner can still apply for Indian citizenship, he/she has to follow the normal process of naturalisation – which takes 11 or more years.

The CAB is seen by many as a quick move to change the demographics and voters-profile in favour of the ruling party by selective admission of illegal migrants.

As per the critics, Citizenship (Amendment) Bill violates Article 14 of the Indian Constitution – the fundamental right which guarantees equality to all persons. This is part of the basic structure of the Constitution and hence cannot be reshaped by any Parliament laws.

It is yet to be seen if the Supreme Court allows the selective fast-tracking for Indian Citizenship. The apex court has power even to declare the bill as unconstitutional.

The policy towards illegal migrants and refugees needs wider debates and deliberation. However, religion can never be the basis of Indian Citizenship.