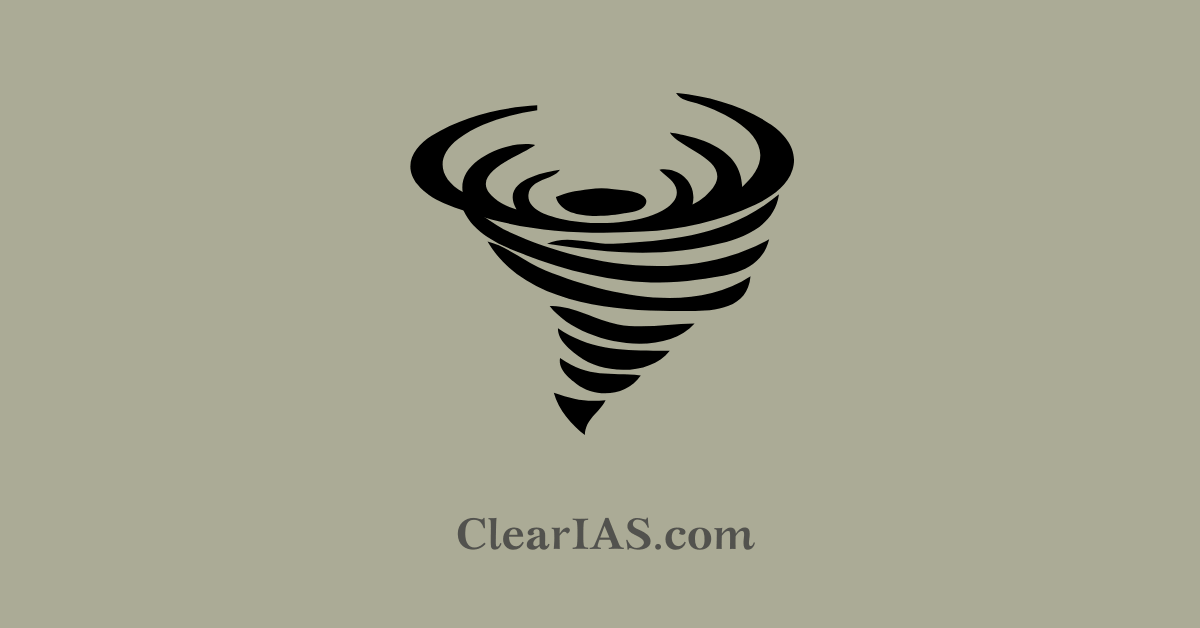 When the velocity of winds increases to such an extent that they attain strong force, a cyclonic storm is formed.

What is a Cyclone?

Cyclones are the centers of low pressure. They are surrounded by closed isobars having increasing pressure outward.

The inward flow of air is due to pressure gradient force and the lowest pressure at the center.

From the location point of view cyclones are classified into two principal types:

Temperate cyclones also called extratropical cyclones or waves cyclones, are low-pressure centers produced in the mid-latitudes during winters in both hemispheres.

They are formed in regions extending between 35-65 degree latitudes in both hemispheres due to the convergence of two contrasting air masses.

They are most intensified and frequent during winters as thermal contrast is high during that time.

Temperate cyclones cover a large area as these are formed due to the convergence of large and contrasting air masses. Sometimes temperate cyclones are so extensive that they cover an area of about 10 lakh square kilometers.

Temperate cyclones extend up to 10 km from sea level in the upper troposphere.

The formation of temperate cyclones is a quick process but passes through a series of successive stages:

The period of a cyclone from its inception (cyclogenesis) to its termination (frontolysis or occlusion) is called the life cycle of a cyclone. It is completed through 6 successive stages and is described by the polar front theory.

Stage 1: It involves the convergence of two masses of contrasting physical properties and directions.

Stage 2: It is also called an incipient stage during which the warm and cold air masses penetrate the territories of each other and a wave-like front is formed under the influence of Coriolis force.

Stage 3: It is the mature stage when the cyclone is fully developed and isobars become almost circular. The energy and intensity of the cyclone are greatest in this stage. Rainfall is generated by nimbostratus clouds along the warm front and cumulonimbus clouds generate high-intensity rainfall at cold fronts.

Stage 4: The warm sector of the cyclone is narrow due to the more advancement of the cold front full stop as a warm front declines energy reservoir of the cyclonic system starts declining.

Stage 5: It starts with the occlusion of the cyclone when the advancing cold front finally overtakes the warm front and an occluded front is formed. The intensity of rainfall and winds declines further.

Temperate cyclones are relatively regular and predictable compared to tropical cyclones and a primarily observed in the winter seasons.

Wave cyclones originating over the Mediterranean sea and Caspian sea flow eastward under the influence of subtropical westerly jet stream. The cyclones enter into North-Western parts of India during the winter season to generate snowfall on the Himalayan mountain ranges of Jammu and Kashmir Himachal Pradesh and Uttarakhand. They also cause rainfall in the plains of Punjab Haryana Western Uttar Pradesh Delhi and northern Rajasthan and support Rabi crops. 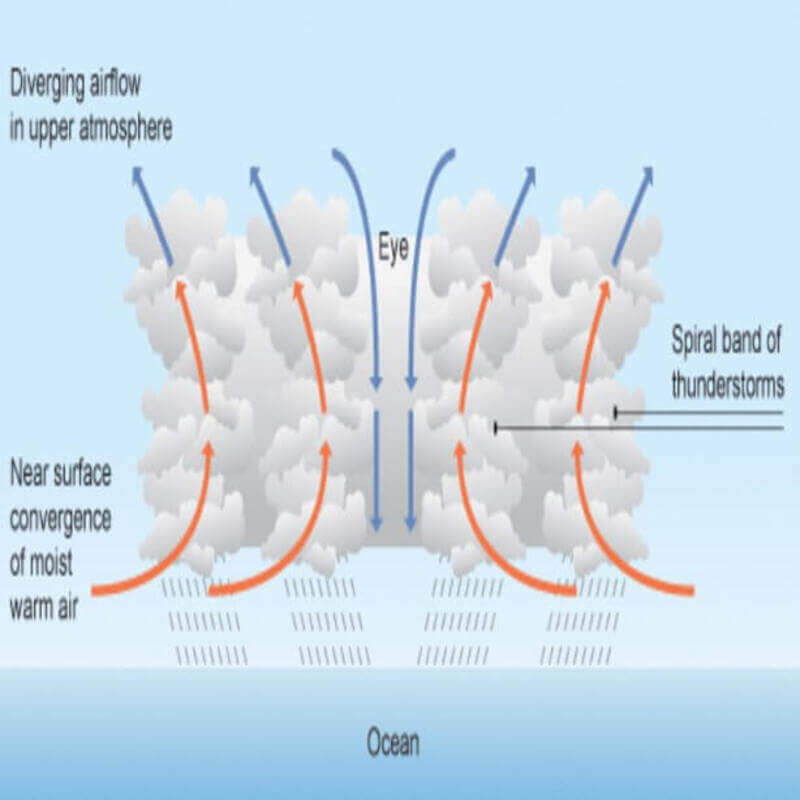 Tropical cyclones are formed between 5 degrees to 30 degrees in both the Northern and Southern hemispheres. These are not formed over or near the equator due to a lack of Coriolis force.

They are low-pressure atmospheric systems of low latitudes.

Cyclones developed in the regions lying between the tropics of Capricorn and cancer are called tropical cyclones which are not regular and uniform like extratropical or temperate cyclones.

Different names of tropical cyclones in different regions of the world:

Because of such steep pressure gradient winds rush hour with great force towards the center having a high velocity of 600 to 800 km per hour. The approach of tornadoes is heralded by dark and thick clouds in the sky resulting in complete darkness and minimum visibility and low air pressure.

Conditions required for the origin of tropical cyclones:

Tropical cyclones cover relatively smaller areas but are more destructive. On average their diameters range between 80-300 km but sometimes they become so small that the diameter is restricted to 50 km or less. But they are relatively taller and extend up to 15 km from sea level in the upper troposphere.

Normally they move from east to west under the influence of trade winds hence the general direction is there for the West word from their origin.

Tropical cyclones become very vigorous with high velocity over the oceans but become weak while moving over land areas and ultimately die out after reaching the interior portion of the continents. That is why the cyclones affect only the coastal areas of the continents.

Anticyclones are centers of high pressure. They are surrounded by closed isobars having decreasing pressure outward.

Due to Coriolis force, blowing winds are deflected from their paths to the right in the Northern hemisphere and left in the Southern hemisphere,  that’s how it gets circular with a flowing system.

The difference in pressure between the center and periphery of anticyclone ranges between 10 to 20 mb and sometimes higher.

The track is highly variable and unpredictable. They move very sluggishly and sometimes they become stationary over a particular place for 4 days. The average velocity of an anticyclone is 30 to 50 km per hour.

Anticyclones originated due to the descent of either polar cold air mass or warm tropical air mass.

Anticyclones tend to produce fairly uniform weather. Whence descends from above at the center and the weather becomes clear and rainless because the descending wind brings atmospheric stability. The weather of Canada USA and northern Eurasia is mostly affected by anticyclones.

Colour code for Cyclones by IMD

Green: The color green denotes that everything is smooth and in order, or that “everything is well” with no bad weather.

Yellow: The yellow color code requests that the security personnel “be updated” to deal with adverse weather that could linger for days and could have an impact on everyday activities.

Orange: The color-coded alert meaning “be prepared” is orange. It may serve as a warning of severe damage to communication breakdowns that could result in power outages, traffic and rail jams, and other problems. The orange notice also serves as a warning to evacuate and to prepare the essentials for families.

Red: The color red represents the strongest level of warning and urges authorities to “take action.” In this situation, the worst weather conditions pose a hazard to human life. With the assistance of disaster management response teams, all necessary steps are taken in this circumstance to manage the situation.

Discuss the meaning of color-coded weather warnings for cyclone-prone areas given by the India Meteorological Department. (Answer in 150 words) 10 marks (GS I)