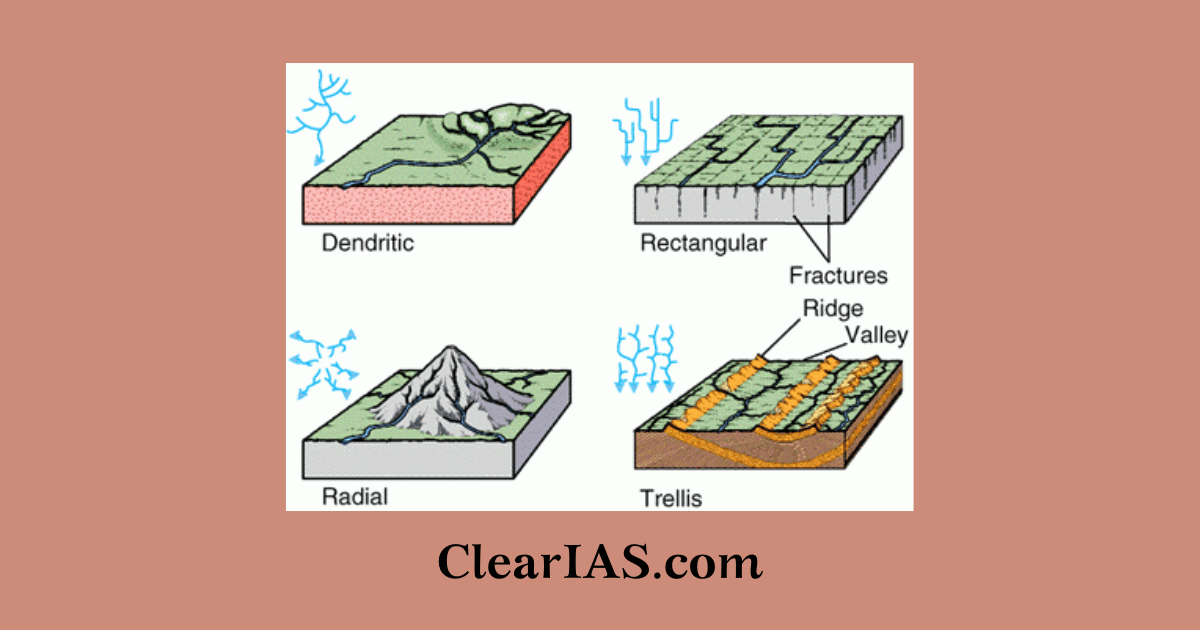 Drainage is the term for the movement of water through clearly defined channels. A drainage system is a common term for the network of such channels.

The drainage pattern is the shape that the lakes, rivers, and streams make in a specific drainage basin.

Over time, the pattern left behind by stream erosion provides information about the types of rocks and geologic structures in a section of the landscape subject to streams.

The land surface and the rivers and streams make up the drainage basin.

The drainage basin serves as a funnel, gathering all the water in the area it drains and directing it to a single location.

Several drainage patterns depend on the shape and creation of river patterns. It can be broadly divided into two types:

It has no relation to the local topography or geology. Despite topographic changes, the river in the discordant drainage pattern stays on its original course.

It is also known as inconsequential drainage. When a piece of a river slope and its surroundings are raised, the river maintains its previous slope while cutting through the uplifted area, creating deep gorges known as vertical erosion or vertical downcutting.

Rivers like the Indus, Sutlej, Brahmaputra, and other Himalayan rivers are examples of antecedent rivers or drainage.

The harder basal rocks appear unrelated to the tougher rock bed when a river flowing over a softer rock stratum reaches them while following the initial slope. The term “superimposed drainage” refers to this sort of drainage.

The hardness and softness of the rock and the patterns of faults or fractures frequently have a significant impact on the drainage patterns (dendritic, trellis, etc.).

However, on occasion, the land swiftly rises with the stream’s initial level. Increasing the stream’s gradient increases the erosive force of the stream.

Some excellent examples of superimposed drainage may be seen in the rivers flowing at the Rewa Plateau, including the Damodar, Subarnarekha, Chambal, Banas, and others.

It is related to the local topology and geology. The slope of the river and the topography have a significant role in determining the course of the river in a concordant drainage pattern.

When the river flows generally in the direction of the slope, there is a consequent drainage system.

Peninsular Indian rivers including the Godavari, Krishna, and Cauvery pour into the Bay of Bengal after descending from the Western Ghats. They are the examples of the consequent Drainage pattern.

Streams that are formed after the original stream (which is consequent rivers) are considered as the Subsequent River System.

Once the primary drainage pattern has been formed, it is a subsidiary stream that erodes along an underlying band of non-resistant rock.

For instance, the Yamuna and the Ganga are met at right angles by the drainage rivers Chambal, Sind, Ken, Betwa, Tons, and Son.

The most typical type is called a dendritic drainage pattern. It resembles tree roots’ branching pattern.

A dendritic pattern forms where the river channel follows the terrain’s slope.

The pattern appears where there is no distinctive structure in the rock under the stream and where erosion is equally easy in all directions.

E.g. The Indus, Ganga, and Brahmaputra rivers that flow through the northern plains.

It grows in areas with elongated, parallel landforms and a sharp slope to the surface.

In general, tributary streams follow the slope of the surface by spreading out in a parallel-like pattern.

Like the Godavari, Kaveri, Krishna, and Tungabhadra rivers, which have their source in the Western Ghats.

The radial drainage pattern, which forms around a central high point, is typical of conically shaped objects like volcanoes.

The drainage pattern is referred to as “radial” when the rivers originate on a hill and flow in all directions.

For instance, the Narmada and Son rivers, flow from the Amarkantak range.

The pattern of Centripetal Drainage

It is the exact opposite of the radial as here streams move in the direction of a central depression.

These streams nourish ephemeral lakes throughout the rainier seasons of the year, but they vanish during the drier seasons.

When salt dissolved in lakewater precipitates out of the solution and is left behind when the water evaporates, salt flats can also occasionally be formed in these dry lake beds.

Hard and soft rocks are parallel to one another in folded topography, where trellis drainage arises.

Synclines, which are downturned folds, create valleys where the main channel of the stream is located.

When secondary tributaries join principal tributaries of main rivers at right angles, a pattern similar to this is created.

For instance, the Indus, Ganga, and Brahmaputra rivers in the high Himalayan region.

In areas that have experienced faulting, the rectangular drainage pattern is present. It grows on rocky ground that is tightly connected.

Streams cluster in areas where exposed rock is weakest because they take the path of least resistance. The tributary streams enter the mainstream at acute angles and create steep bends. E.g. streams in Chambal, ken, and betwa.

It is a drainage pattern in which the confluence of a tributary with the main river is indicated by a discordant junction, as if the tributary meant to flow upward rather than downstream.

This pattern develops when the main river is captured and changes its flow direction, while the tributaries continue to point in the previous flow direction.

An intriguing example of a barbed drainage system is the Arun River in Nepal, a tributary of the Kosi.

The rivers and lakes do not follow a logical pattern.

These patterns are developed when the previous drainage system is disturbed.

For instance, the glaciated valleys of the Karakoram.

These patterns are created where the bedrock joints and faults connect at sharper angles.

This pattern is typical in the foothills of the Himalayas.