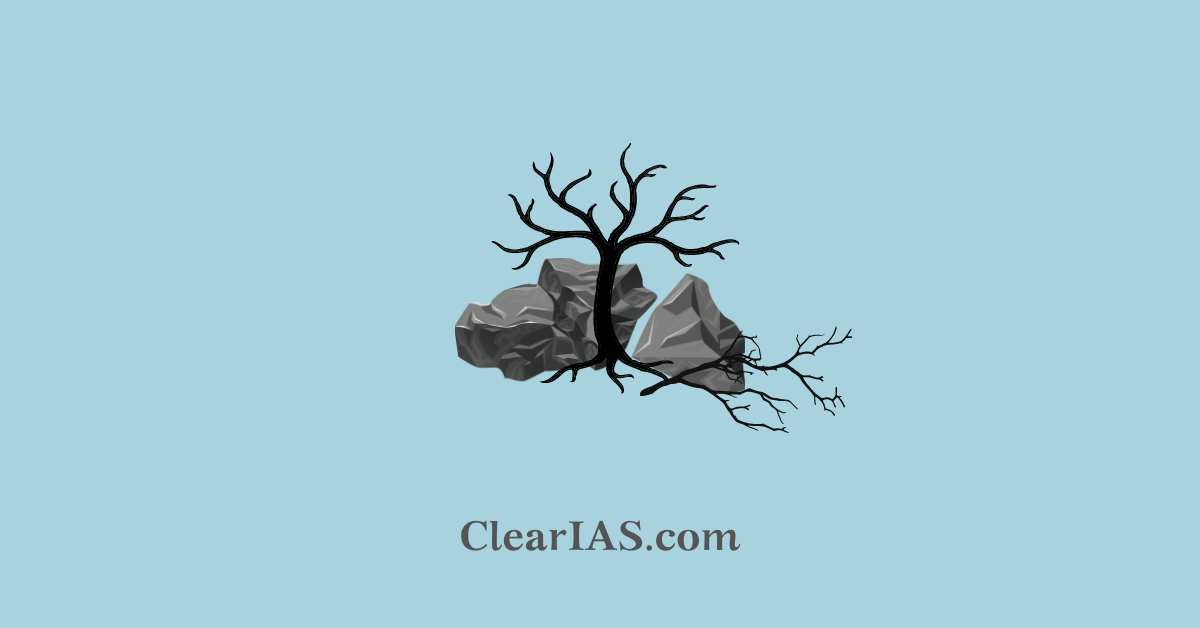 Drought is characterised by a temporary decline in the availability of water or moisture that is significantly below the average or expected level for a certain period of time.

According to the High-Powered Committee on Disaster Management Report, drought is defined as “any shortage of water to satisfy the usual needs of agriculture, livestock, industry, or a human population,”.

Various phenomena can be the reason for drought, following main types of droughts are mentioned below.

It defines a condition where the amount of rainfall falls below a certain level for a given time period (days, months, seasons, or years).

According to the India Meteorological Department (IMD), drought is a condition that occurs in any area when the mean annual rainfall is less than 25% of the average rainfall.

Moderate drought, which occurs when rainfall varies between 25 and 50% below average level, and

Severe drought, which occurs when rainfall drops more than 50% below average.

It is important to note that, in terms of meteorological drought, the effectiveness of rainfall is significantly more crucial than the amount of rainfall. On average India receives 118 cm of annual rainfall which is considered to be the highest anywhere in the world for a country of comparable size.

However, the southwest monsoons’ unpredictable, unreliable, and variable rainfall causes drought conditions in many parts of the country. The major causes of meteorological drought are:

It is concerned with the drying up of surface water resources such as rivers, streams, lakes, ponds, tanks, reservoirs, etc.

There are many processes, besides meteorological drought, which lead to surface water drought. Surface water drought is primarily caused by extensive deforestation. Other undesirable human activities that enhance the drought condition are the expansion of non-terraced agriculture, environmentally hazardous mining, and indiscriminate road construction.

There are soft, permeable alluvial soils in India’s northern plain. These soils allow water to penetrate and aid in replenishing groundwater. The peninsular plateau, in contrast, contains hard, impervious rocks that obstruct the replenishment of groundwater. Still, a situation of reduction in groundwater level pertains to Northern Indian Plain too.

Agricultural drought is concerned with the impact of meteorological/hydrological drought on crop yields. Agricultural drought results when soil moisture and rainfall levels are insufficient to support a healthy crop’s growth to maturity, leading to high moisture stress and the withering of important crop areas.

High Yielding Varieties (HYV) of seeds have taken the place of conventional drought-resistant seeds since the beginning of the green revolution in India in the 1960s. The water needs of various crops have increased as a result of the use of fertilisers.

The Green Revolution-based agriculture is incredibly reliant on irrigation, and any delay in the water supply will result in severe agricultural drought.

Due to the changing cropping patterns, limited water supplies are under severe stress, which occasionally results in severe droughts.

This is a concern with insufficient soil moisture, especially in locations that receive rain, which may not sustain agricultural growth. This occurs during a meteorological drought when there is less water available to the soil and more water is lost through evaporation.

It reflects the reduction of availability of food and loss of income because of crop failures that endanger the food and social security of individuals in the affected areas.

A famine happens when access to food is reduced significantly, which could result in widespread starvation if assistance is not provided.

Although a drought may occur at any time and in any part of the country, most of the drought-prone areas are those having marginal rainfall and high variability of rainfall.

Droughts have a wide range of effects on the masses, especially in developing countries like India. The following categories best describe the impact of droughts in India:

The effects of drought appear can cause severe damage, a few important them are mentioned below:

The weaker segments of society are most affected by a drought. These people include migrant workers, small-scale and marginal farmers, and artists like weavers.

A drought-prone area is defined as one in which the probability of a drought year is greater than 20%.

A chronic drought-prone area is one in which the probability of a drought year is greater than 40%.

A drought year occurs when less than 75% of the normal rainfall is received.

The number of times a drought occurs over a specific period of time is referred to as its frequency. Depending on the amount, fluctuation, and need for water, different regions of the country experience different frequencies of droughts.

The first systematic attempt at famine relief measures could be traced to the Great Famine or the Orissa Famine of 1866. Under Sir George Campbell’s chairmanship, the then government formed the first Famine Commission.

The formation of a Famine Commission in 1880 in the wake of the famines of 1873 and 1876–1878 was the second step. As a result of the Famine Commission’s suggestions, the government chose to introduce the Famine Codes started in 1883, bringing in the modern approach to relief administration.

This programme was initiated in 1974. The intention was to change DPAP from a relief and employment-oriented programme into one aimed at ‘drought proofing’ through the adoption of an integrated area development approach which sought to mitigate the impact of future droughts by stabilizing both production and employment.

The objectives of the programme are:

The prevention of drought conditions is greatly aided by integrated watershed management.

This strategy guarantees coordinated planning, combined use of surface and groundwater, prioritisation of rational water use, and planning based on the entire amount of available water resources.

Various watersheds have been constructed throughout the country’s different rainfed regions as part of the National Watershed Programme for Rainfed Areas.