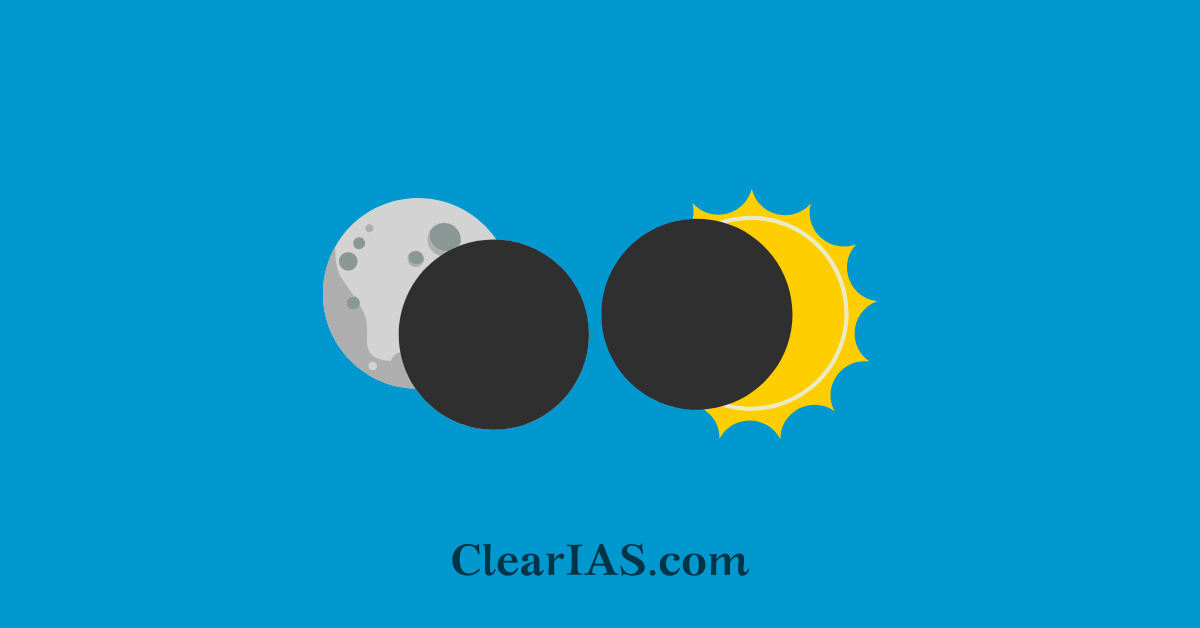 Eclipse is an astronomical event that occurs frequently and makes headlines. There are different types of eclipses and sub-types as well which will be discussed in detail here. Eclipse is derived from the ancient Greek words meaning ‘abandonment’ or ‘darkening of a heavenly body’. Read here to learn all about the eclipse event.

Solar and lunar eclipses have long captivated both experts and the general public. Ancient cultures created myths and stories to explain the momentary darkening of the Sun or the Moon because eclipses were regarded as phenomena to be feared.

Recent centuries have seen an increase in the study and examination of our natural environment by astronomers and scientists who track eclipses.

The last solar eclipse occurred on October 25 which was a partial one, and the subsequent partial solar event will take place on august 2 2027.

What is an eclipse? 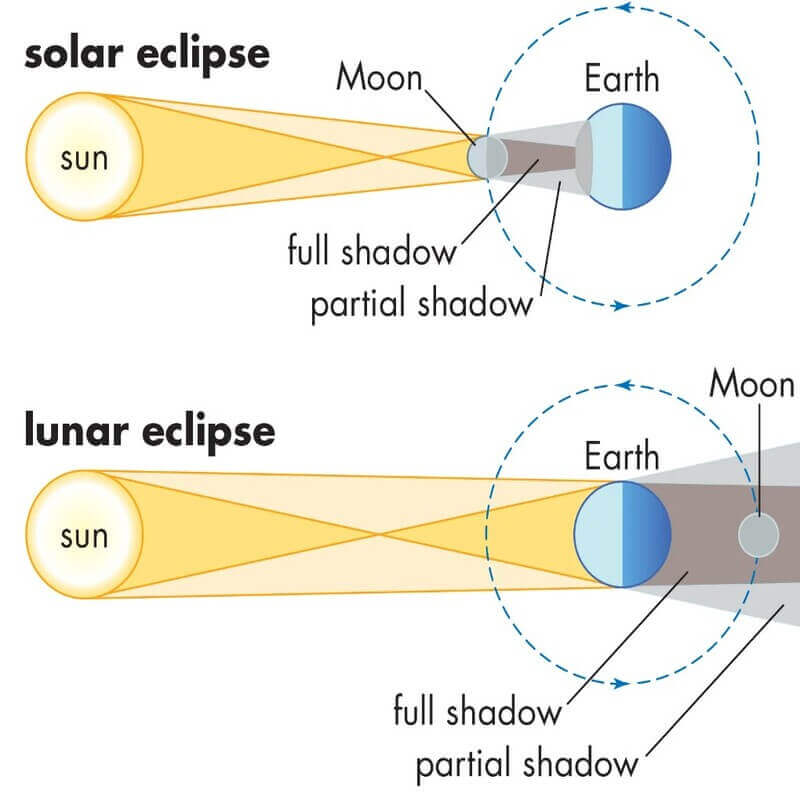 Syzygy is an alignment of three heavenly bodies. Syzygy is derived from the ancient Greek word syzygia, meaning to be yoked together or conjoined.

In addition to syzygy, the term eclipse is also used when a spacecraft is in a position to see two celestial bodies aligned in this way.

A transit or an occultation (totally concealed) causes an eclipse (partially hidden).

From Earth, we can see two types of eclipses:

These occur when the Sun, Earth, and the Moon align in a straight or almost straight configuration. Solar eclipses occur when the Sun, the Moon, and Earth line up, either fully or partially. Depending on how they align, eclipses provide a unique, exciting view of either the Sun or the Moon.

A solar eclipse happens when the Moon passes between the Sun and Earth, casting a shadow on Earth that either fully or partially blocks the Sun’s light in some areas.

This only happens occasionally, because the Moon doesn’t orbit in the same plane as the Sun and Earth do. The time when they are aligned is known as eclipse season, which happens twice a year.

During the solar event, the Moon casts two shadows on Earth.

A total solar eclipse happens when the Moon passes between the Sun and Earth, completely blocking the face of the Sun.

People located in the center of the Moon’s shadow when it hits Earth will experience a total occultation. The sky will darken as if it were dawn or dusk.

Weather permitting, people in the path of a total solar eclipse can see the Sun’s corona, the outer atmosphere, which is otherwise usually obscured by the bright face of the Sun.

A total solar occultation is the only type of solar eclipse where viewers can momentarily remove their eclipse glasses for a brief period when the Moon is completely blocking the Sun.

An annular solar eclipse happens when the Moon passes between the Sun and Earth, but when it is at or near its farthest point from Earth.

Because the Moon is farther away from Earth, it appears smaller than the Sun and does not completely cover the Sun.

As a result, the Moon appears as a dark disk on top of a larger, bright disk, creating what looks like a ring around the Moon.

A partial solar eclipse happens when the Moon passes between the Sun and Earth but the Sun, Moon, and Earth are not perfectly lined up.

Only a part of the Sun will appear to be covered, giving it a crescent shape.

During a total or annular solar occultation, people outside the area covered by the Moon’s inner shadow see a partial solar eclipse.

Because Earth’s surface is curved, sometimes an eclipse can shift between annular and total as the Moon’s shadow moves across the globe. This is called a hybrid solar eclipse. 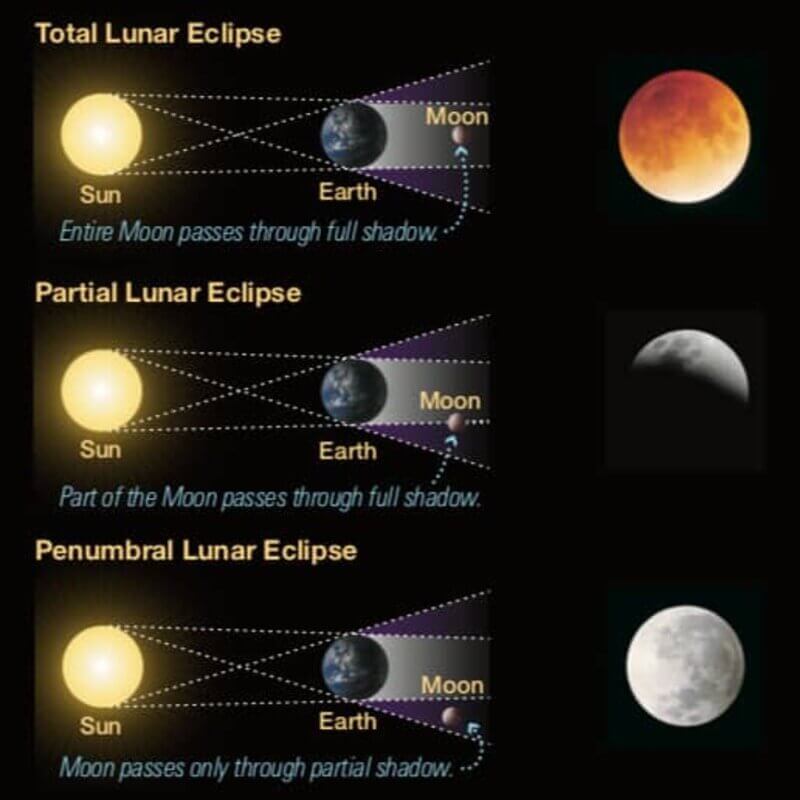 When the Moon moves through the Earth’s shadow, a lunar eclipse takes place. The Moon does not have its light. It shines because its surface reflects the Sun’s rays.

Earth’s shadow can be divided into three parts:

Only during a full moon, when the Moon is on the opposite side of the Earth from the Sun, does this occur.

An eclipse of the Moon can be seen from almost the entire hemisphere, unlike a solar eclipse.

This makes viewing a lunar eclipse from a specific point far more common. A lunar eclipse lasts longer, lasting many hours, with totality itself typically lasting between 30 minutes and over an hour on average.

A total lunar eclipse occurs when Earth’s umbra, the central, dark part of its shadow, covers the Moon’s surface.

But even during a total lunar eclipse, there are still some light reflections from the Moon, hence is not fully dark. Sunlight that has been refracted by the Earth’s atmosphere enters the umbra and casts a dim light.

Sunlight is refracted toward the surface of the Earth as it travels through the atmosphere, with some of the colors with shorter wavelengths scattered and filtered out while the remainder, such as the hues orange and red, travels into the atmosphere. The surface of the fully eclipsed Moon is illuminated in a reddish-orange glow as a result of this light being refracted once more in its direction. For this reason, depictions of such lunar phenomena dating back to the earliest eclipses sometimes use the term “Blood Moon.”

A penumbral lunar occultation happens when the Moon travels through the faint penumbral portion of Earth’s shadow.

When this happens, the Earth blocks some of the Sun’s light from directly reaching the Moon’s surface and covers all or part of the Moon with the outer part of its shadow, also known as the penumbra. Since the penumbra is much fainter than the dark core of the Earth’s shadow, the umbra, a penumbral eclipse of the Moon is often difficult to tell apart from a normal Full Moon.

When a planet comes between Earth and the Sun, it is called a transit. Mercury and Venus are the only two planets that can be seen transiting the Sun from Earth. This is because they are the only planets in the solar system whose orbit is inside Earth’s orbit.

Since ancient times, records of solar and lunar occultations have been preserved. Historical records can be chronologically dated using eclipse dates.

There have been recordings of the event in a Syrian clay table in 1223 BCE, Ireland in 3340 BCE, Babylonian records of the 13th century BCE, and Greek and Chinese records as well.

In the 5th century CE, solar and lunar eclipses were scientifically explained by Aryabhata, in his treatise Aryabhatiya. Aryabhata stated that the Moon and planets shine by reflected sunlight and explained eclipses in terms of shadows cast by and falling on Earth. Aryabhata provides the accurate computation and the size of the eclipsed part during an eclipse.