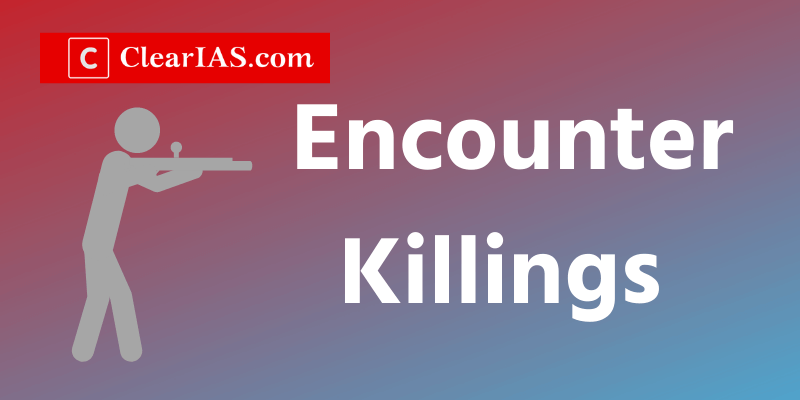 ‘Encounter Killings’ is the term used to describe extrajudicial killings by the police or the armed forces when they encounter the alleged criminals or suspected gangsters.

Is encounter killings an offence?

Can encounter killings be justified?

The four accused in the case of rape and murder of a woman veterinarian (Dr.Disha) have been killed in an exchange of fire with the Hyderabad Police.

According to initial reports, the police were trying to reconstruct the crime scene when the accused tried to escape with the police officers’ gun. Police opened fire after due warnings and all four died on the spot.

In India, the death sentence can be awarded only on the rarest of the rare instances – by the Supreme Court of India – after following the due process of law.

The term extrajudicial killing is used for executions done by the state outside the due process of law.

Why encounter killings receive the support of masses?

The common man is highly unsatisfied with the long-delay in the justice-delivery process. Very often, the accused are not convicted due to lack of evidence.

Many see encounter killings are a means of ensuring speedy justice.

What if the those who are killed by encounters are innocent?

What if the authorities start to misuse the power?

What if the killings eliminate any further proof of other persons involved?

Rule of law is the fundamental principle of governance of any civilised liberal democracy. It avoids any sort of arbitrariness.

History of Extra-Judicial Killings in India

There were attempts in many states to govern through “rule by law” and oppose “rule of law”. In this case,  the police had assumed the role of both investigator and judge.

There were many reports of encounter killings in Maharashtra, Tamil Nadu, and West Bengal.

Is Encounter Killing an offence?

The apex court, when dealing with a PIL on alleged 1528 extra-judicial killings in Manipur from 2000 to 2012 by Armed Forces said:

A distinction must be drawn between the right of self-defence or private defence and use of excessive force or retaliation.

Very simply put, the right of self-defence or private defence is a right that can be exercised to defend oneself but not to retaliate.

What if the Encounter Killings are fake?

How should the death at police hands be investigated: The 16-point guideline by the Supreme Court of India

The Supreme Court bench of chief justice R.M. Lodha and Justice Rohinton F. Nariman in 2014 outlined a 16-point guideline to follow in cases of death or grievous injury in police encounters.

As per the Supreme Court of India, every death at police hands must be recorded and investigated by an independent agency or a police unit not involved in the case.

The guidelines, in brief, are as follows:

Note: The case originated with a Public Interest Litigation (PIL) filed by the People’s Union for Civil Liberties (PUCL) before the Bombay high court, which later came to the apex court in appeal. PUCL had challenged the genuineness of at least 99 so-called encounters — staged killings — between the Mumbai Police and alleged criminals resulting in their deaths between 1995 and 1997.

Unless it is for self-defence, all extra-judicial killings are otherwise unacceptable in a society of law.

‘The rule by gun’ should not be prefered to ‘the rule of law’. The fundamental premise of the rule of law is that every human being, including the worst criminal, is entitled to basic human rights and due process.

We must recall what the Supreme Court said in the Salwa Judum case (2011):

The primordial value is that it is the responsibility of every organ of the State to function within the four corners of constitutional responsibility. That is the ultimate rule of law.

The need of the hour is to rebuild the lost trust in the justice delivery mechanism in the country and fast-track the process.