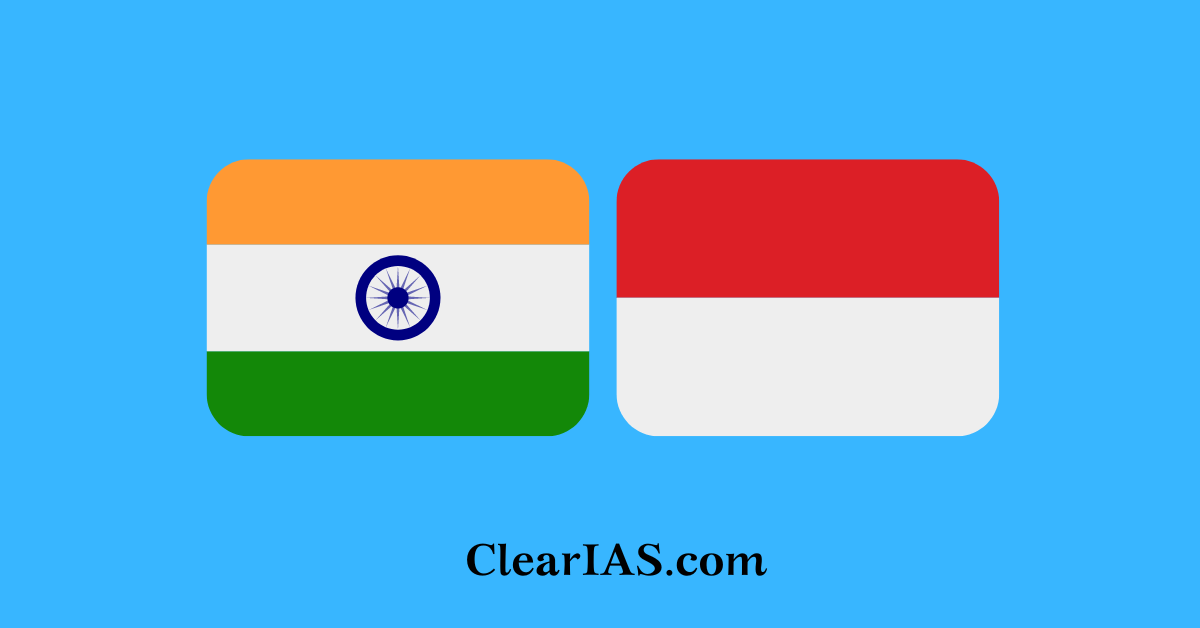 India – Indonesia has traditionally been close and friendly. What are the recent developments in the India-Indonesia relationship? Read here to know more.

India has had a long-standing relationship with Indonesia for almost two millennia marked by cultural exchange and ancient maritime links.

Some of the interesting facts about Indonesia are listed below.

Indonesia has risen to become India’s second-largest trading partner in the ASEAN region. India-Indonesia bilateral trade has increased from 6.9 billion USD in 2007-08 to 19.03 billion USD in 2014-15. India is Indonesia’s largest buyer of crude palm oil, as well as a major importer of coal, minerals, rubber, pulp and paper, and hydrocarbon reserves.

The Hindu, Buddhist, and later Muslim faiths migrated to Indonesia from India’s shores. The stories from the great epics of Ramayana and Mahabharata inspire Indonesian folk art and drama. The shared culture, colonial history, and post-independence goals of political sovereignty, economic self-sufficiency, and independent foreign policy all serve to unite the two countries.

Around 100,000 Indonesians of Indian origin live in Indonesia, mostly in Greater Jakarta, Medan, Surabaya, and Bandung. They primarily engage in the textile and sporting goods trade. Engineers, consultants, chartered accountants, bankers, and other professionals are among the 10,000 Indian nationals who live in Indonesia.

The Indian community in Indonesia is highly regarded, and prosperous. This includes individuals holding senior positions in both local and multinational corporations. In August 2012, the Embassy established the Indian Cultural Forum (ICF), an umbrella organisation of thirty-one Indian social organisations.

The strategic location of Indonesia at the intersection of the Indian and Pacific Oceans is critical for securing the major sea lanes of communication, given that the South East Indian Ocean is a hotbed of piracy and smuggling of people, arms, drugs, and money; illegal, unreported, and unregulated fishing; and terrorist movement, among other things.

Recently, Indonesia agreed to grant Indian investors access to the strategic island of Sabang, which is close to the Malacca Strait. This would assist India in becoming a provider of security in the Indian Ocean region. Both countries are G20, Non-Aligned Movement (NAM), East Asia Summit, and United Nations members.

China’s growing assertiveness in the region has necessitated greater cooperation among the region’s various players. Indonesia’s support will strengthen its Act East Policy because it is the most populous and economically powerful country in Southeast Asia. In addition, India’s SAGAR (Security and Growth for All in the Region) vision aligned with Indonesia’s Global Maritime Fulcrum. Both countries are concerned about the rise of religious-based terrorism. As a result, both countries agreed to establish interfaith dialogues to address this issue.

Garuda Shakti is a joint military exercise between India and Indonesia.

Even after the Comprehensive Economic Partnership with India, Indonesia would be hesitant to go against China’s interests due to its close relationship with China since the Cold War.

The demarcation of the two countries maritime borders in the Andaman Sea has not been completed. During the visit, however, both parties reiterated their intention to resolve the matter as soon as possible.