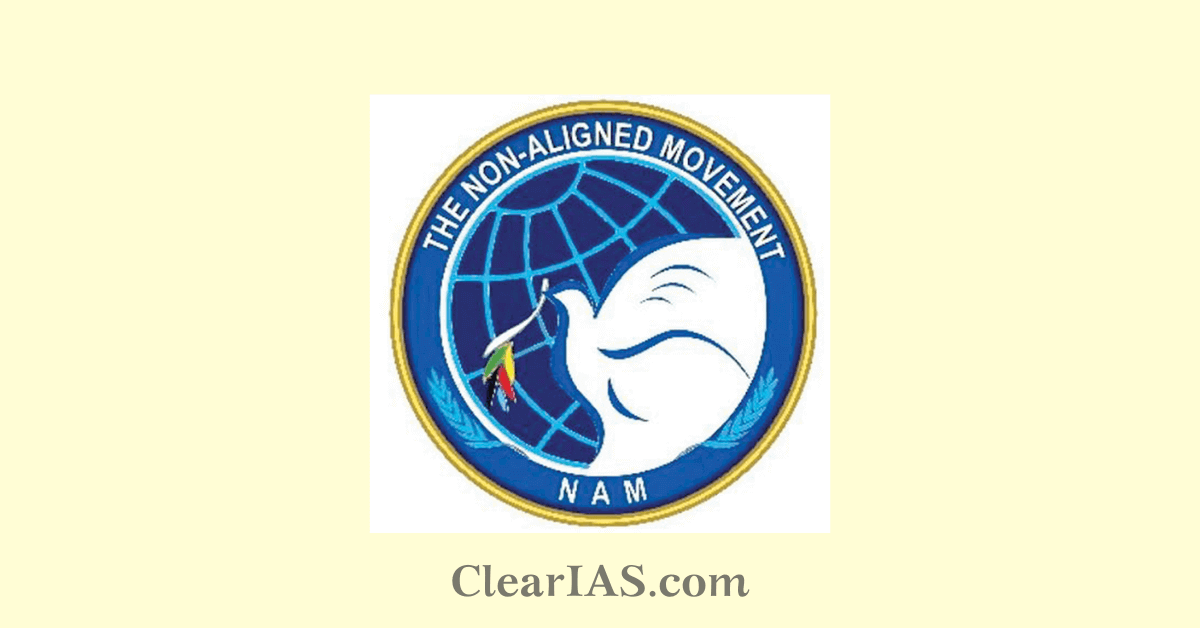 The Non-Aligned Movement (NAM) is a forum of 120 developing world states that are not formally aligned with or against any major power bloc. Read to know more.

The Non-Aligned Movement (NAM) is an organization of States that did not formally align with the US or USSR and sought to remain independent.

Created in 1961, NAM has sought to “create an independent path in world politics that would not result in member States becoming pawns in the struggles between the major powers.”

After the United Nations, the Non-Aligned Movement is the largest grouping of states worldwide.

The concept of not aligning a country’s policy with others can be traced to the Congress of Vienna (1814-15) when the neutrality of Switzerland, by which that country would keep out of others’ conflicts, was recognized.

The basic concept for the group originated in 1955 during discussions that took place at the Asia-Africa Bandung Conference held in Indonesia.

The Non-Aligned Movement was established in 1961 in Belgrade, Yugoslavia, through an initiative of the Indian Prime Minister Nehru, Yugoslav President, Egyptian President, Ghanaian President, and Indonesian President. This led to the first Conference of Heads of State or Governments of Non-Aligned Countries. The term non-aligned movement first appeared in the fifth conference in 1976, where participating countries are denoted as “members of the movement”.

Non-alignment was about retaining the independence of judgment and freedom of political action.

The purpose of the organization was enumerated in the Havana Declaration of 1979 to ensure “the national independence, sovereignty, territorial integrity and security of non-aligned countries” in their struggle against imperialism, colonialism, neo-colonialism, racism, and all forms of foreign subjugation.

Phase III: After the Cold War

The Non-Aligned Movement had become an effective means of promoting India’s diplomatic presence and the means of securing economic assistance internationally.

But the disintegration of the USSR led to a world order dominated by the US. India’s New Economic Policy and inclination towards the US raised questions over India’s seriousness over non-alignment.

NAM continued losing relevance for India in an aligned world, especially after the founding members failed to support India during crises. During the 1965 and 1971 wars, Indonesia and Egypt took an anti-India stance and supported Pakistan.

Eventually, India and other NAM countries started associating themselves with developed powers within the liberal economic order and reaped benefited from it.

India is a member of the G20 has declared itself as a nuclear weapons power and has for all practical purposes abandoned the call for global nuclear disarmament.

India has also joined the Quadrilateral Security Dialogue (QUAD) a coalition seen by many as a counter to China’s rise in the Indo-Pacific, along with membership of the Shanghai cooperation organization (SCO) led by China has shown India’s balancing approach in the new world order.

India is striving hard for balanced world order and asserting itself as one of the key players.

In 2019, India was represented at the 18th NAM summit by its vice president and external affairs minister. In May 2020, Indian Prime Minister Narendra Modi participated in a NAM virtual summit.

The Non-Aligned Movement marked 60 years since its start in the 1960s, and its relevance has come to be questioned in the current geopolitical scenario.

The world is again being divided into blocs, one led by the US and the other by China-Russia.

The large-scale migrations to Europe from Asia and Africa, and within Asia due to the unstable regimes and ethnic conflict are also influencing the geopolitical stage.

Global climate change and frequent catastrophic disasters have demanded the formation of global consensus to deal with it.

The changing US policies, protectionism, remerging terrorism, and nuclearisation of the middle east are other dimensions to keep watch on.

The Formation of multiple regional economic groupings like Trans-Pacific Partnership (TPP) and Regional Comprehensive Economic Partnership (RCEP) is decreasing the relevance of multilateral bodies like the World Trade Organisation (WTO) from the global arena.

These changes are pointing towards a situation under which NAM was initially created, hence making such an ideology still relevant on a global scale.

Can NAM still be relevant?

Yes, the Non-Aligned Movement has the potential to never be irrelevant because in principle it provides a strong base to the foreign policy of its members.

It is the basis of “Strategic Autonomy”, which is the need of the hour of today’s world. The principles of NAM still can guide the nations towards it.

NAM is a platform where India can assert its soft power and provide active leadership by being a torchbearer for smaller countries at multilateral platforms.

It should be used as a platform to raise global issues like terrorism, climate change, trade protectionism, and others.

NAM platform can be used to garner support from South-East Asian countries like Vietnam, Malaysia, Indonesia, and the Philippines against Chinese assertion in the South China Sea and related island and border disputes.

NAM can provide a platform for Afro-Asian cooperation and a strong position for a poor African nation to have healthy negotiations with China and the US for economic development without compromising the sovereignty of their land.