ClearIAS » Current Affairs Notes » G20 – What is the significance of the ‘Group of 20’? 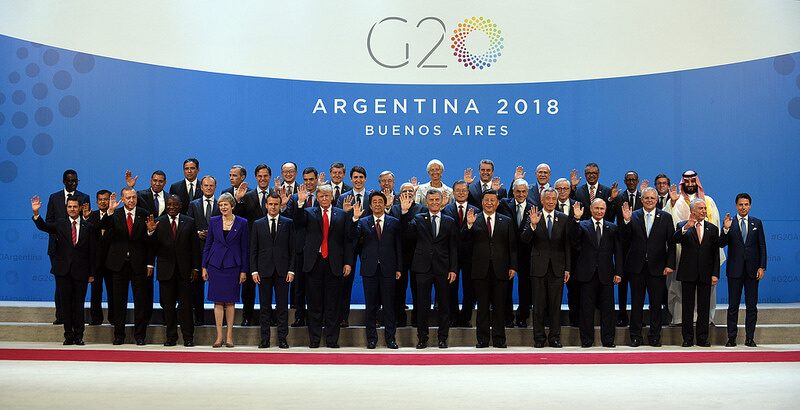 The G20 (Group of 20) is an international forum which includes 19 of the world’s largest economies and the European Union.

G20 is a forum for economic, financial and political cooperation. It addresses the major global challenges and seeks to generate public policies that resolve them.

Together, the G20 members represent –

Because the G-20 is a forum, its agreements or decisions have no legal impact, but they do influence countries’ policies and global cooperation.

What are the advantages of the G20 as a world forum?

The G20 is small enough to allow concrete face-to-face discussions that adapt to the new challenges of the international agenda and is large enough to represent the vast majority of world economic production.

Which countries are part of G20?

Why was the G20 created?

The G20 was conceived in 1999, while the repercussions of the Asian financial crisis of 1997 still lasted. The committee’s inaugural meeting took place in Berlin in December 1999.

In a meeting of finance ministers and presidents of central banks of the G7, it was decided to expand the group and make it more representative in order to generate policies that have an impact In the economy.

They decided to invite a group of key emerging economies to a new forum of finance ministers and presidents of Central Banks, which would later become the G20.

With the start of the global financial crisis of 2008, the G20 became the main instrument to face the debacle. And for that it was essential to involve the highest ranking officials. Thereafter, presidents and heads of state joined the G20.

What topics does the ‘Group of 20’ address?

The Group of 20 deals with a broad theme.

While economic and financial issues tend to lead the agenda, other areas have gained momentum.

Other recent additions include participation of women in the labor market, sustainable development, global health, fight against terrorism and inclusive ventures, among others.

The G20 agenda is annual and includes more than 50 meetings, enhanced by working groups and discussions between permanent members and guests.

The cycle concludes with the Leaders Summit , where a final declaration is signed by which the leaders commit themselves to address and collaborate on the issues addressed. For example:

The flow of these meetings is channeled through two channels: the Finance Channel, headed by the Ministry of Finance and the Central Bank, and the Sherpas Channel, coordinated by the Chief of Cabinet of Ministers and of which ministries from different areas participate. .

The Finance Channel covers meetings between finance ministers and central bank presidents, as well as meetings of their second lines and working groups on financial issues. In their meetings throughout the year, they focus on global collaboration in financial and monetary policies, which may include issues such as investment in infrastructure, fiscal policy, inclusion and financial regulation.

The Sherpas Channel, meanwhile, covers non-financial issues, such as political commitment, the fight against corruption, development, gender equality, trade and energy, among others. Each member country of the G20 is represented at the meetings by the Sherpa and the minister that corresponds to the subject. The Sherpa then advises his Head of State or Government on the issues discussed and brings the dialogue to the relevant working groups.

To increase the scope and impact of the G20, and to ensure that the approach is truly global, the main international organizations are invited to participate in the meetings and the Leaders’ Summit.

Every year, when a new country assumes the presidency (Argentina in 2018), it works hand in hand with the previous presidency (Germany) and the next presidency (Japan) in what is known as the troika. This ensures continuity in the group’s agenda.

The G20 seeks to enrich the content of its dialogues by encouraging the participation of civil society through affinity groups . Each of them focuses on an issue of global importance and meets independently throughout the year. From the dialogue in the various meetings, each group delivers a series of recommendations to the G20.

What impact does the G20 have?

The main achievements of the G20 include:

The G20 also specifically helped to provide emergency funds during the 2008 crisis and plays an important role in financing for development.

Where is the G20 headquarters?

The G20 does not have permanent offices or employees.

The country that presides over the group (in an year) takes care of all the organization and the logistical coordination of the meetings.

In addition to the Group of 20 members, which other nations are participating in the meetings?

Spain is a permanent guest and always participates in the G20 summits. Every year, the host country also chooses other guests. For the G20 2018, President Mauricio Macri invited Chile and the Netherlands. The key regional organizations are usually invited to participate and are represented by the country that holds the presidency. The Association of Southeast Asian Nations (ASEAN), the African Union, the New Partnership for Africa’s Development (NEPAD) are examples of organizations that are invited regularly. This year, President Mauricio Macri also invited the Caribbean Community (CARICOM), represented by Jamaica.

What does presiding the G20 imply?

Every year, G20 members elect a country to preside over the group.

The country that assumes the presidency organizes the meetings, defines the agenda of priorities to be debated and decides which countries and organizations to invite. As the G20 does not have a central organization, the role of the country presiding over the group is critical to the effectiveness of the forum.

How is the country that exercises the presidency of the G20 appointed?

The president is chosen by a rotation system. For this, the 19 member states of the G20 (the 20th member, which is the European Union, is not part of a group of countries) are divided into five groups, consisting of a maximum of four states:

Counting the last edition of Germany, 11 of the 19 member countries of the forum presided over it.

Which countries and invited organizations participate in the G20 2018?

What is the objective of Argentina for its G20 presidency?

Argentina seeks to build a consensus that allows all countries to commit to an equitable and sustainable development that generates opportunities for all.

This is in line with the region’s concerns and aspirations: to take advantage of the great economic potential of Latin America and the Caribbean to advance towards the eradication of poverty.

which implies thinking about an education that provides – equal opportunities, infrastructure for development, and a sustainable food future.

Who will be the next G20 president after Argentina?