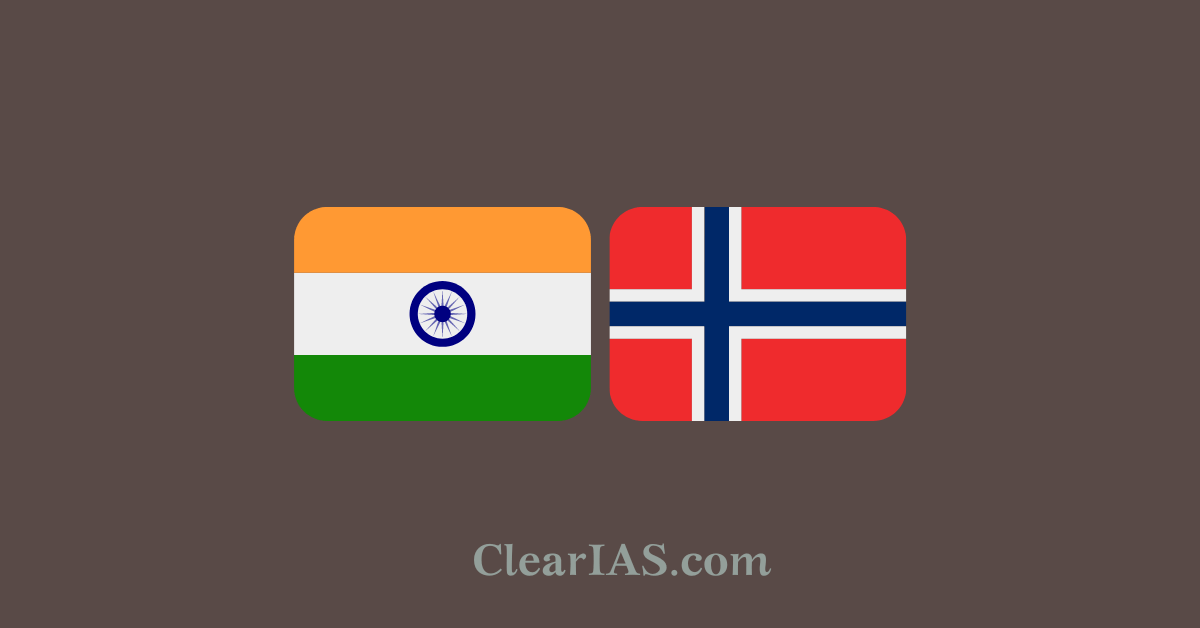 India-Norway relations are on the upswing in economic and commercial platforms. There has been a spurt in trade, investments, transfer of technology, and other contacts.  The two nations have maintained a strong and friendly relationship like India’s relations with other Nordic countries. Read here to know more about the bilateral relationship.

The current growth in Indo-Norwegian eco-commercial ties has been fuelled by a common interest, in sectors such as deep off-shore, shipping, hydroelectricity, Information Technology, Bio-Technology, and light consumer goods.

Norwegian IT companies are also looking at offshoring their business to India or investing in Indian start-ups.

Recently, it was reported that the bilateral trade between India and Norway has doubled to $2 billion in the last two years (2020-22).

Ties between Norway and India have deep historical roots.

As early as the 1600s, a Danish-Norwegian trading station was established in Tranquebar (Tharangambadi), which today lies in the Indian state of Tamil Nadu.

Norway’s first Consulates in India opened in Kolkata and Mumbai in 1845 and 1857, respectively.

In 1952, the “India fund” was established” with the aim to provide development assistance with a focus on fisheries. The same year, Norway opened its Embassy in New Delhi.

India signed a Double Taxation Avoidance Agreement (DTAA) with Norway in 1986 which was revised in February 2011.

Norway had extended its support to India’s bid for a permanent seat in the UN Security Council.

Norway sees India as an important partner for economic development.

There has been growth in economic and commercial relations between India and Norway in recent years, especially in areas such as oil and gas, shipping and maritime industries, renewable energy, offshore projects, and service sectors.

To achieve these objectives, India-Norway focuses on political contact and cooperation between the authorities, business cooperation, and research cooperation.

The joint launch of the India-Norway Task Force on Blue Economy for Sustainable Development took place in 2020.

Norway and India have a culture cooperation exchange agreement, which is the basis of our government-to-government partnership in this field.

In 2019, Norway and India signed a Memorandum of Understanding (MoU) establishing structured and strategic cooperation on the oceans.

Other areas of cooperation

Norway’s commercial ship fleet ranks sixth in the world, and ship recycling was essential to maintaining a contemporary fleet for both competitive and environmental reasons.

The Indian Institute of Technology-Madras and the Institute of Wind Energy in Chennai collaborate academically with Norwegian institutions.

For Indian landmarks like the Taj Mahal, the Norwegian business Piql was involved in building a digital record.

In 2010, the Research Council of Norway established the Norwegian Program for Research Cooperation with India (INDNOR) to strengthen and promote cooperation between Norway and India on research and research funding.

Norway committed to investing $1 billion from its climate investment fund over the course of five years, with the amount funded in India depending on the projects.

For projects pertaining to wind energy, Norway collaborates with the National Institute of Wind Energy.

To find a strategy to convince enough nations to ratify the Hong Kong Convention, Norway is collaborating closely with India. It will be a legally binding document on a global scale.

India’s developments will have a significant impact on how successful the world is in achieving the Sustainable Development Goals (SDGs) and global climate targets.

Its geopolitical role, its large population, its long coastline, and, not least its booming economy make India an increasingly influential regional and global player and an important partner for Norway.

Norway and India both prioritize stability and predictability. Norway seeks to cooperate with India to strengthen the multilateral governance systems, the international trading system, and the international legal order, not least regarding the oceans.

The Indian government has set a target to double the proportion of gas in its energy mix by 2022. Norway, with its leading expertise and large fossil fuel reserves, can work with India to secure energy supplies through trade and effective resource utilization.