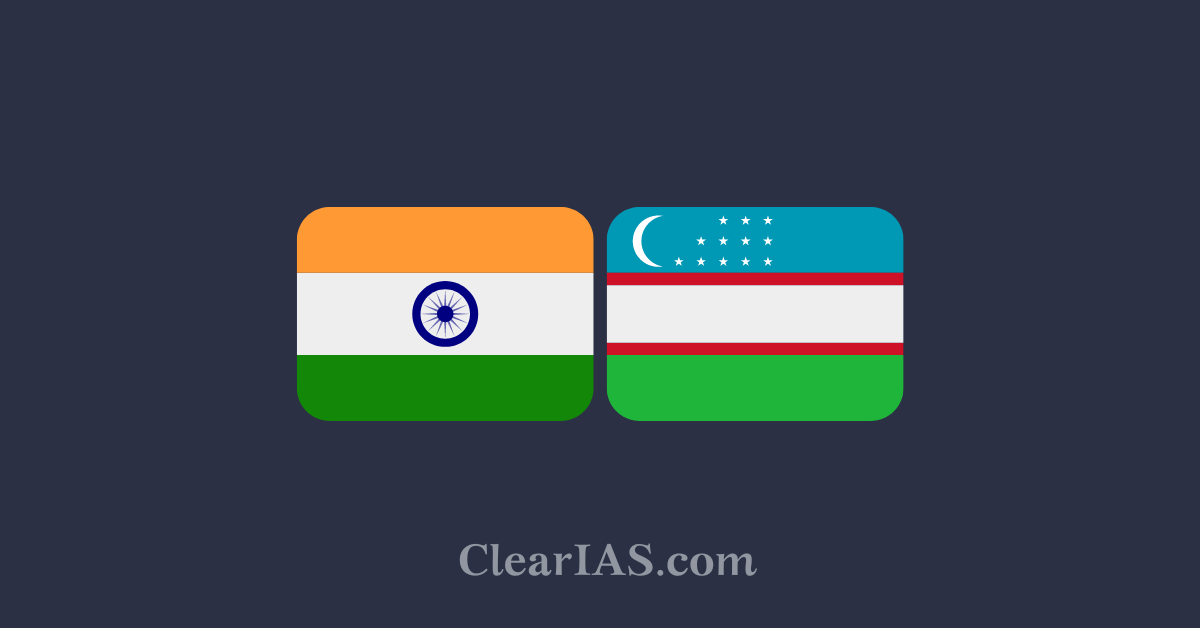 India-Uzbekistan Relations are deep-rooted in history and progressing well over the years. Read here to know more.

India was one of the first countries to acknowledge the state sovereignty of Uzbekistan after its independence in 1991.

The diplomatic relations between the two nations have completed 30 years in 2022.

Relations between Uzbekistan and India have their roots deep in history.

There are frequent references to Kamboja in Sanskrit and Pali literature, which is stated to include parts of present-day Uzbekistan.

At various times the Saka / Scythian, Macedonian, Greco-Bactrian, and Kushan Kingdoms included parts of both India and present-day Uzbekistan, and at other times they were part of neighboring empires.

In later years, Fergana, Samarkand, and Bukhara in Uzbekistan emerged as major towns on the trade routes linking India with Europe and China.

Buddhism is said to have traveled to China through Uzbekistan and Central Asia.

Amir Timur was born near Shahrisabz and Babur came from Fergana in Uzbekistan.

Indian merchants based in Samarkand and Bukhara were an integral part of the local economy.

Interactions over thousands of years contributed to close cultural linkages in architecture, dance, music, and cuisine.

Indian movies have traditionally been popular in Uzbekistan.

India had close interaction with the Uzbek SSR during the Soviet times. Indian leaders often visited Tashkent and other places.

Prime Minister, Shri Lal Bahadur Shastri passed away in Tashkent on 11 January 1966 after signing the Tashkent declaration with Pakistan.

In August 1991, as the events leading to the disintegration of the USSR unfolded, the then Chairman of the Supreme Soviet of Uzbekistan was visiting India.

Bilateral relations are managed through a robust mechanism including an Intergovernmental Commission, which oversees trade and economic relations and Foreign Office Consultations.

Trade relations between India and Uzbekistan are governed by the Agreement on Trade and Economic Cooperation signed in May 1993.

Indian investments by companies are mostly in the field of pharmaceuticals, amusement parks, automobile components, and the hospitality industry.

The main focus has been to assist Uzbek security agencies through training and capacity building.

The first-ever joint military exercise held between India and Uzbekistan was named Dustlik.

India has also assisted in setting up an India Room at the Armed Forces Academy of Uzbekistan in Tashkent.

India- Central Asia Dialogue: It enables the issues of further strengthening ties between India and the countries of Central Asia in the spheres of politics, economics, digitalization, and cultural and humanitarian direction.

India-Uzbekistan relations are key to India’s vision of an integrated extended neighborhood.

There is a need to identify new drivers for ambitious growth in bilateral trade between India and Uzbekistan.

As mentioned in the IGC meeting, there is a need for an integrated approach to regional connectivity and cooperation.

The following seven can be emerging areas of cooperation between both nations:

Uzbekistan has expressed interest in joining the International Solar Alliance, which should be actively pursued by India.

The countries should also consider Uzbekistan joining the International North-South Transport Corridor (INSTC). Along with Iran, the addition of Uzbekistan will push the inter-regional connectivity to newer levels.