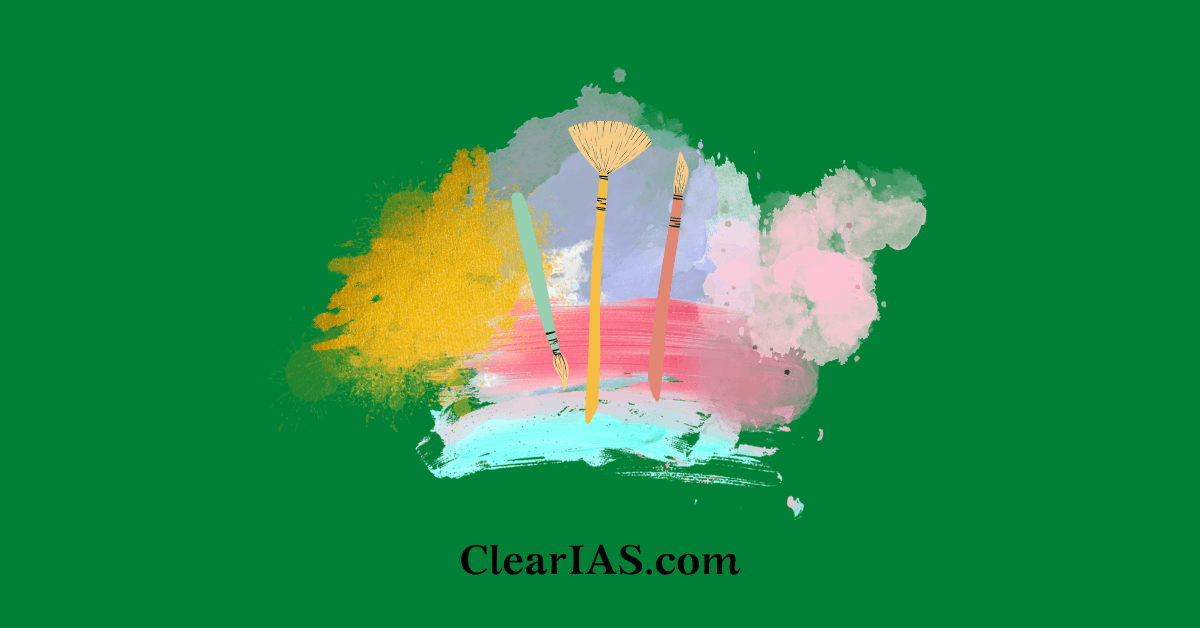 In almost every painting there is a hidden story, right? We have paintings from ancient times. Do you know why and how they painted? And what are the different stages of paintings? Thus this article deal with all the aspects of paintings.

Indian Paintings have a very long tradition and history in Indian Art. Because of the climatic conditions, very few early examples survive. In all historic times (Ancient, Medieval, and Modern) paintings play a significant role.

Indian paintings can be classified as Murals, Miniatures, and Paintings on cloth.

The evolution of the prehistoric period consists of Paleolithic, Mesolithic and chalcolithic.

The prehistoric period in the early development of human beings is commonly known as the ‘Old Stone Age ’ or ‘Palaeolithic Age ’.

The Paleolithic period can be divided into three phases:

Some of the characteristics of these are:

There are two major sites of excellent prehistoric paintings in India:

Indian murals have a long history that spans from the 2nd century BC to the 8th – 10th centuries AD. More than 20 locations in India are known to have murals from this time period, mostly in the form of natural caves and rock-cut chambers.

Ajanta, Bagh, Sittanavasal, Armamalai Cave, Ravan Chhaya Rock Shelter, and Kailashnath Temple in Ellora Caves are a few locations where this painting can be found.

These paintings feature a variety of subjects, such as animals, fish, ducks, people collecting lotuses from a pond, two dancing figures, etc. In addition, one can discover inscriptions from the 9th and 10th centuries, with Jainism serving as their primary source of inspiration.

The works of art depict the Vijayanagara Court’s history and times. Paintings from a secular era decorate the walls of Lepakshi Temple. Eg: Virupaksha Temple, Hampi – consists of the history of the dynasty and stories of Ramayana and Mahabharatha.

It is the extension of Vijayanagara paintings. Depicting the story of Mucukunds, a legendary Chola King.

As soon as India made direct contact with Islamic civilization, miniature paintings began to fully blossom. The Mughal Empire (1526–1757 AD) brought about the establishment of studios at the Imperial court, which marked the start of a new stage in the development of Indian painting.

From there, paintings such as portraits, genre or celebratory scenes, illustrated manuscripts, album miniatures, and a variety of other subjects travelled throughout India. A significant Persian influence was initially present in Indian miniature painting, but it was only temporary as the Indian artists quickly regained their independence and originality.

Akbar, the succeeding Mughal Emperor, constructed an atelier for them to promote the rich art form. These artists, in turn, trained Indian artists who created paintings in a new distinct style inspired by the Mughals’ royal and romantic lives.

Rajput or Rajasthani miniature is a style of miniature created by Indian artists. Several schools of painting emerged during this period, including Mewar (Udaipur), Bundi, Kotah, Marwar (Jodhpur), Bikaner, Jaipur, and Kishangarh.

It was most prosperous between 1600 and 1700 CE and is a prime example of Hindu Rajput courts. Malwa School rejects a specific centre for its origin and instead suggests a vast territory of Central India.

This contrasts with the specificity of Rajasthani schools, which emerged and thrived in precise territorial kingdoms and courts of their respective kings. After the 17th century came to an end, this conservative style vanished.

Salient features of this form of painting

One of the most significant schools of Indian miniature painting from the 17th and 18th centuries is the Mewar painting. It was created in the Hindu principality of Mewar and is a school in the Rajasthani style (in Rajasthan state).

In sub-Himalayan India through Himachal Pradesh, from Jammu to Almora and Garhwal, the Pahari style developed and thrived between the 17th and 19th centuries. The Pahari paintings can be divided into two categories: Basholi and Kangra School and Jammu or Dogra School.

The bold, intense Basohli Painting, which originated in Basohli in Jammu and Kashmir, and the delicate, lyrical Kangra paintings, which came to be associated with the style before other schools of painting emerged, each produced stark variations within the genre.

Another well-known illustration from this school of painting dates to 1730 AD and is taken from a series of paintings by Manaku of the Gita Govinda.

The facial type changes, becoming a little heavier, and the tree forms take on a more naturalistic appearance, possibly as a result of the Mughal painting’s influence.

In this miniature, it is possible to see the use of vibrant, contrasting colours, a monochromatic background, big eyes, bold lines, beetles’ wings to depict diamonds in ornaments, a narrow sky, and a red border.

This collection of paintings is referred to as the Kangra style because Raja Sansar Chand of Kangra’s portraits is the only other painter who painted in a similar manner to them. The Nainsukh family is primarily credited with creating paintings in the Kangra style.

Beginning in the early 19th century, some Pahari painters received patronage from Maharaja Ranjit Singh and the Sikh nobility in Punjab, where they painted portraits and other miniatures in a modified Kangra style that persisted through the middle of the century.

Salient features of this school of art:

The Deccan painting was created in the Muslim capitals of the Deccan sultanates that emerged from the dissolution of the Bahmani Sultanate by 1520 in the Deccan region of Central India. Bijapur, Golkonda, Ahmadnagar, Bidar, and Berar were among them. The main period was from the late sixteenth to the middle of the seventeenth century, with a revival of sorts in the middle of the eighteenth century, which by that time was centred on Hyderabad.

The Deccan painting outperforms the early Mughal art that was developing concurrently with the north in “the brilliance of their colour, the sophistication and artistry of their composition, and a general air of decadent luxury.” Other differences include painting “tall women with small heads” wearing saris and “poorly modelled” faces in three-quarter view rather than mostly in profile in the Mughal style. Although there are many royal portraits, they do not accurately depict their Mughal counterparts. The representation of buildings is as “totally flat screen-like panels.”

Sub-schools in the Deccani school of painting:

The subjects of folk paintings, which are the visual expressions of local painters, are typically taken from epics like the Ramayana and Mahabharata and the Bhagavata Purana, as well as from everyday village life, birds and animals, and natural objects like the sun, moon, plants, and trees.

Women use bamboo twigs to paint that have been attached to cotton swabs, rice straws, or fibre. In the past, they produced colours using natural materials like phalsa and Kusum flowers, bilwa leaves, kajal, turmeric, etc.

The state of Odisha is famous for this form of folk painting. Some of the features of this form of painting are:

The art form has changed and evolved over time in observable ways. The Chitrakars have painted on Tussar silk and palm leaves in addition to producing showpieces and wall hangings.

These simple paintings and drawings, which could easily be reproduced by lithography influenced even modern artists like the late Jamini Roy.

Many people believe that Indian art began to become modern around 1857. The National Gallery of Modern Art in New Delhi includes pieces from this era in its collection. The Impressionist movement conveniently marks the beginning of the modern era in the west. However, the Bengal School of Painting is usually where we start when discussing modern Indian art.

Modern or contemporary art is characterized by certain freedom from the invention, acceptance of an eclectic approach that places artistic expression in an international context as opposed to a regional one, a positive elevation of technique that has grown to be both widespread and supreme, and the emergence of the artist as a unique individual.

Evolution of modern painting in India

More on Bengal school of art

The Bengal School of Art commonly referred to as the Bengal School was an art movement and a style of Indian painting that originated in Bengal, and flourished throughout the Indian subcontinent, during the British Raj in the early 20th century.

The emergence of the Bengal school of Art:

The Main features of the Bengal School of Painting:

Impressive and Indian Subject Matter: Bengal School is both Indian and very impressive. Themes from literature, religion, and history are all used.

1. The painting of Bodhisattva Padmapani is one of the most famous and oft-illustrated paintings at

(a) a hand-painted cotton textile in South India

(b) a handmade drawing on bamboo handicrafts in North East India.

Ans: (a) a hand-painted cotton textile in South India

Which of the above places is/are known for mural paintings?