ClearIAS » Geography Notes » Islands: Everything You Need to Know 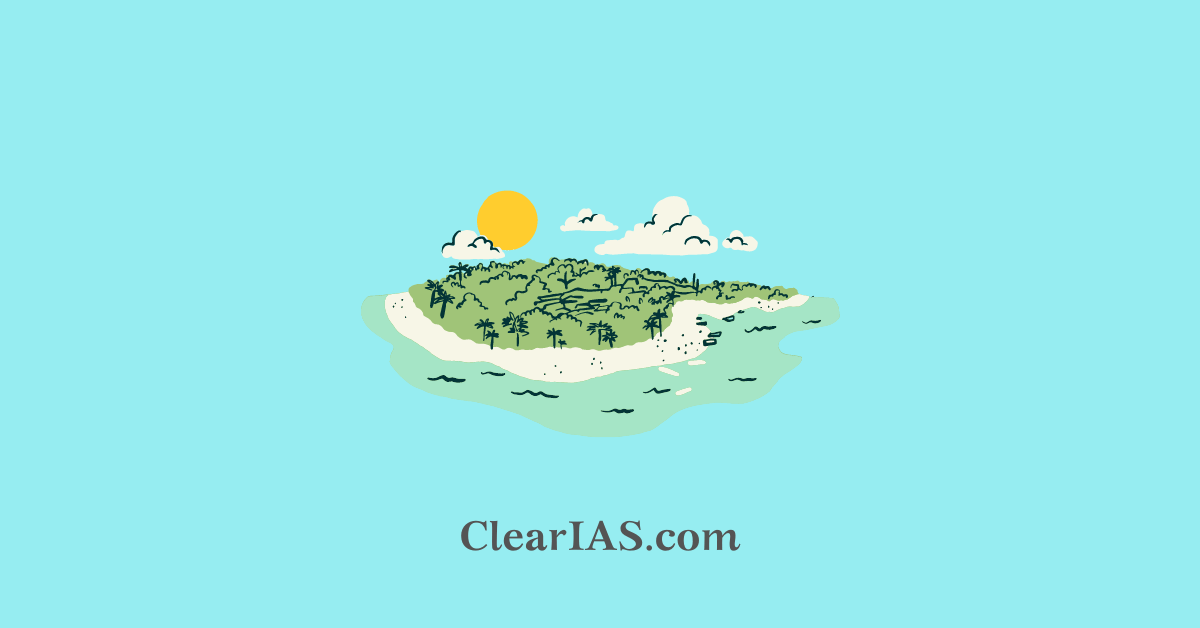 A piece of land surrounded on all sides by water is termed an island. Check the article below to know all about the Islands.

An island may occur individually or in a group and can be found in open oceans or seas. Islands are also found in lakes or rivers but are usually smaller in size and of local significance.

The government established the Island Development Agency (IDA), an apex agency with the responsibility of directing the program for the holistic development of islands.

Islands are classified as follows-

Such islands were formally part of the mainland and with time get detached from the continent, maybe separated by a sallow lagoon or a deep channel. They may have separated because of sea level rise or land subsidence, which has submerged the lowland linkages.

The comparable physical features, flora, and fauna found on both sides of the channel indicate that they once shared a relationship with the adjacent continent.

As time passes, human intervention and other natural processes may result in the emergence of different surface features. But even then, the fundamental structural components will remain the same.

Continental islands are of different types-

These are located just outside the continent and are closely related to the characteristics of the mainland, which they originally comprised.

(b) Archipelagoes or island groups

These comprise groups of variously sized and shaped islands, such as the British Isles, the Balearic Islands in the Mediterranean, and the islands in the Aegean Sea.

The islands make up an archipelago that resembles a circle around the edge of the continent, continuing mountain ranges that may be seen on the continent.

These islands are often small and situated in the middle of oceans. The mainland is completely cut off from them. They have different flora and fauna from what may be found on the continents.

Most oceanic islands have extremely few inhabitants because of their isolation from the world’s major trading hubs. Oceanic islands typically belong to one of the following categories.

The majority of islands in the oceans are actually the uppermost portions of volcanoes that emerge from the ocean bottom.

The majority of the world’s waters contain volcanic islands. They can be found in numerous groups in the Pacific Ocean, including Hawaii, the Galapagos Islands, and the South Sea islands.  Mauritius and Reunion are in the Indian Ocean.

The coral islands, in contrast to the volcanic islands, are significantly lower and only narrowly rise above the water.

These islands, which are composed of diverse varieties of coral organisms, can be found both close to the coasts of the mainland and deep within oceans. Such as the Laccadives, and the Maldives in the Indian Ocean.

As a part of Indian Physiography, the country has two large groups of islands.

They were once referred to as Laccadive, Minicoy, and Amindive. These were given the name Lakshadweep in 1973. It is only 32 sq km in size.

The 9-Degree Channel divides the island of Minicoy from the main Lakshadweep archipelago (9 degrees north latitude).

The administrative center of Lakshadweep is located on the island of Kavaratti.

There is a wide range of vegetation and animals.

Andaman and Nicobar is an extensive, north-to-south running series of islands in the Bay of Bengal.

They are larger, more in number, and more dispersed.

The Andaman in the north and the Nicobar in the south make up the two main divisions of the entire group of islands. These islands are thought to be elevated sections of submerged mountains.

This group of islands also has a very diverse range of flora and fauna. These islands are close to the equator, have a thick canopy of trees, and have an equatorial climate.

The barren island, part of the Andaman and Nicobar group of Islands, is home to India’s only active volcano.

The Andaman and Nicobar are separated by a 10-degree channel.

The Great Nicobar and Sumatra islands of Indonesia are connected by the Grand Channel.

On the Andaman Islands lives an uncontacted tribe called the Sentinelese people. It’s possible that the Sentinelese are the only known civilization to have not developed beyond Paleolithic technology, yet this is questionable given that metalworking evidence has been found on their island.

Some Important Islands of India

India has a total of 1,382 off-shore identified islands, including unhabituated ones. Out of all, a few islands of India are of some significance to the country.