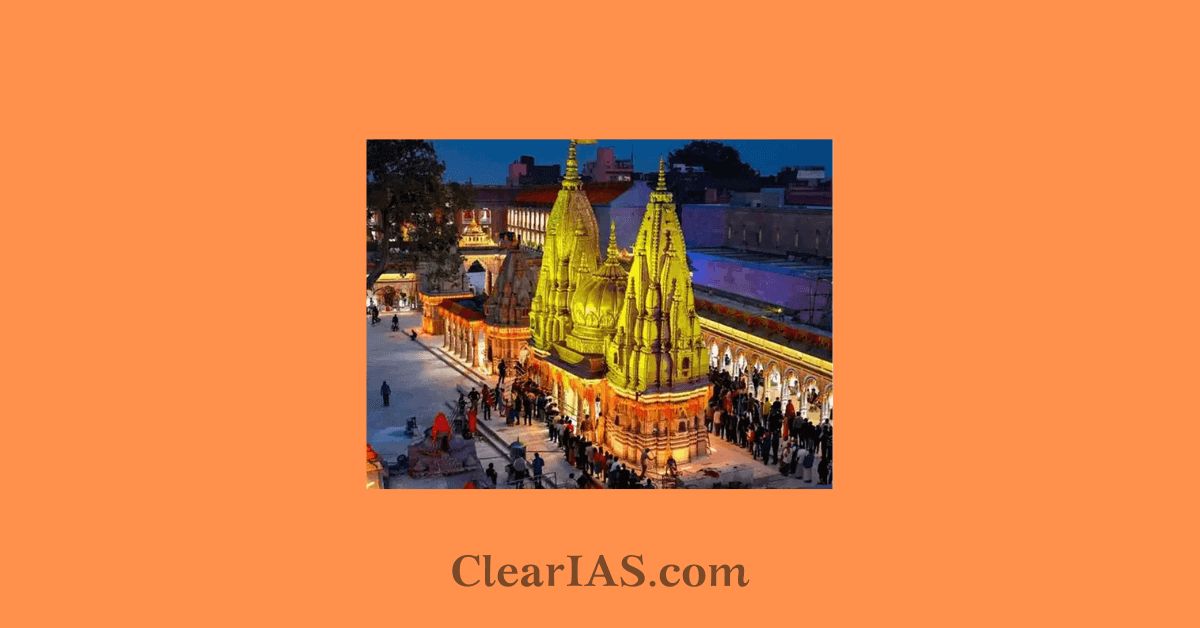 Kashi Vishwanath Temple is a famous Hindu temple dedicated to Lord Shiva. Read to know more about the history and new phases of the temple.

On 13th December 2021, PM Narendra Modi inaugurated Phase 1 of the Kashi Vishwanath Corridor in Varanasi. It will connect the ancient temple to the ghats of Ganga. The temple is situated on the west bank of the River Ganga.

The project has 23 buildings which include a tourist facilitation center, Vedic Kendra, Mumukshu Bhavan, Bhogshala, city museum, viewing gallery, food court among others.

Kashi Vishwanath Temple is one of the most famous temples also known as the Golden temple dedicated to Lord Shiva. The temple stands on the western bank of the holy river Ganga and is also part of the twelve Jyotirlingas, the holiest of Shiva temples.

The Manikarnika ghat on the banks of the Ganges near the temple is considered to be a Shakti peeth.

The actual date of when the temple was first constructed is unknown.

1194: The original or the oldest of the Vishwanath temple was destroyed by Qutb-Uddin Aibak’s army when he defeated the Raja of Kannauj. Aibak was the slave general of Mohammad Ghori.

1230: The temple was rebuilt by a Gujarati merchant during the reign of the Slave dynasty’s Sultan Iltutmish.

The temple was rebuilt again by Raja Man Singh Kachwaha of Amer. And in 1585, during the rule of Mughal emperor Akbar, Raja Todar Mal further renovated the temple.

1669: Emperor Aurangzeb destroyed the temple and built the Gyanvapi Mosque in its place. The remains of the erstwhile temple can be seen in the foundation, the columns, and the rear part of the mosque.

The temple was rebuilt again for a fourth time by Raja Jai Singh II of Amer during the later Mughal period (the 1730s). He was the governor and senior mansabdar of the empire at that time and built additional ghats and a Jantar Mantar in Varanasi.

1742: The Maratha ruler Malhar Rao Holkar made a plan to demolish the mosque and reconstruct the temple. However, this plan was intervened by the then Nawab of Awadh.

Over the years many noble and royal families of the subcontinent have made generous contributions to the operations and upkeep of the Kashi Vishwanath temple. In 1835, Maharaja Ranjit Singh donated a 1-tonne gold plating for the temple dome. In 1860 a foot-high stone statue of Nandi Bull was gifted by the Rana of Nepal.

The temple is constructed in the Nagara style of temple architecture, mostly prevalent in northern India with pious Jyotirlinga which is a dark brown colored stone enshrined in the Sanctum, placed on a silver platform.

The main temple is a quadrangle in shape and is surrounded by smaller shrines of other gods. There is a small well in the temple called the Jnana Vapi (the wisdom well) that sits to the north of the main temple. A Sabha Griha or Congregation Hall is leading to the inner Garbha Griha or Sanctum Sanctorum.

The foundation was laid in March 2019 with a budget allotment of 800 crore rupees. The project was conceptualized to create an easily accessible pathway for the pilgrims, who had to make way through congested streets to take a dip in the Ganga and offer the water of the holy river at the temple and restore the glory of the ancient temple.

More than 40 ancient temples were rediscovered during the work on the Kashi Vishwanath Corridor project, which was restored ensuring there is no change in the original structure.

A gallery has been devoted to the excavated remains of the temple complex at the National Museum in New Delhi.

In Varanasi, smart signages have been erected to provide information on the importance of cultural importance of the heritage sites ad the city’s 84 ghats.

Significance of the project

Kashi Vishwanath temple corridor project will help boost tourism by providing the pilgrims and travelers with amenities such as wider and cleaner roads and lanes, better lighting with bright street lights, and clean drinking water.

The nearby Buddhist pilgrimage site of Sarnath will also get a boost in connection to the tourism boom here.

The Rudraksha Convention Centre is designed like a Shiva lingam and can seat 1200 people. It has divisible meeting rooms, an art gallery, and multi-purpose pre-function areas.

Ganga Cruises have been planned for the tourists, the road infrastructure has been upgraded and LED screens will be installed showing the famous Ganga aarti and aarti at the temple for the tourists.

The Benaras railway station has been revamped with facilities like an air-conditioned waiting lounge etc.

This project is also part of the redevelopment of various temples around the country to boost religious and historical tourism.

The temple, till now, was surrounded by the tiny lanes of Varanasi, and access was huge a problem especially on special occasions when the crowds swelled. Also, the temple lacked direct visibility from the Ganga River. Now, the congested streets have been transformed into spacious alleyways for the ease of tourists.