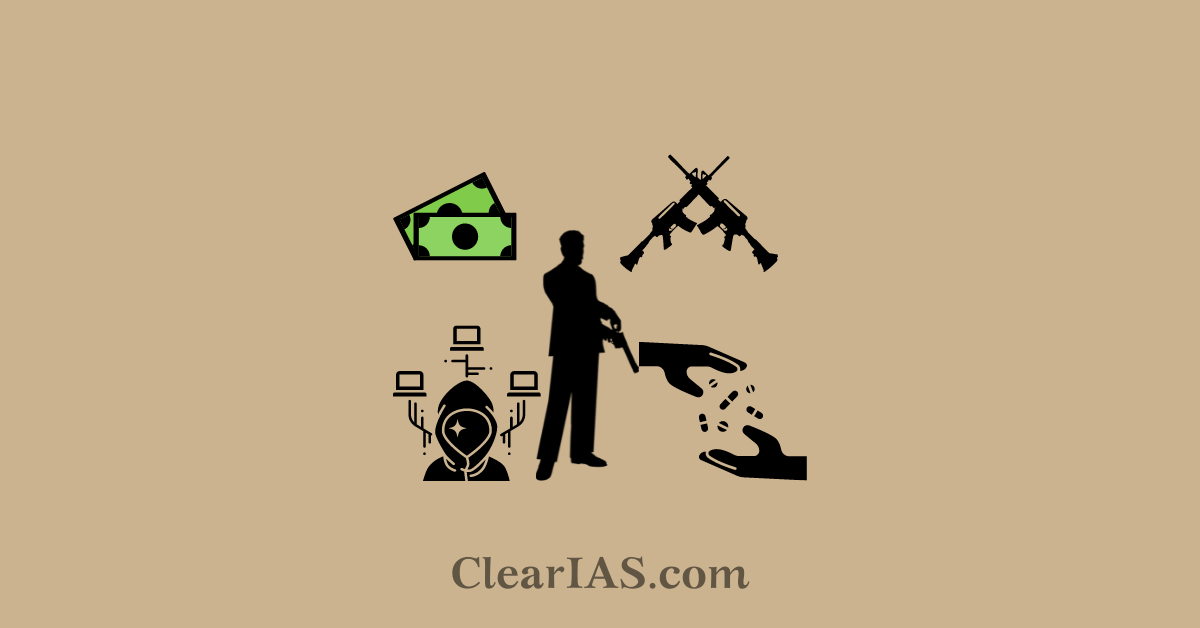 What do the linkages of organized crimes with terrorism mean? Read here to understand the connection and its consequences.

Linkages between organized crimes and terrorism are multidimensionally resulting in a serious threat to national and international peace, security, and harmony.

What are organized crimes?

Organized crime is a local, national or transnational group of centralized organizations run by criminals to carry out illegal activities for money. Organized crime can be motivated by political agendas as well apart from terrorist groups, rebel forces, and separatists.

There are various terms used for criminal organizations like a gang, mafia, mob, ring, or syndicate. There have been sociological studies on the oldest Sicilian mafia along with the economic studies of organized crime groups like the Russian mafia, the Chinese triads, the Hong Kong Triads, and the Japanese Yakuza.

Organized crime is considered to be a changing and flexible phenomenon. Many of the benefits of globalization such as easier and faster communication, movement of finances, and international travel, have also created opportunities for transnational organized criminal groups to flourish, diversify and expand their activities.

Traditional, territorial-based criminal groups have evolved or have been partially replaced by smaller and more flexible networks with branches across several jurisdictions. In the course of an investigation, victims, suspects, organized criminal groups, and proceeds of crime may be located in many States.

Moreover, organized crime affects all States, whether as countries of supply, transit, or demand. As such, modern organized crime constitutes a global challenge that must be met with a concerted, global response.

International terrorism: Violent, criminal acts committed by individuals and/or groups who are inspired by, or associated with, designated foreign terrorist organizations or nations (state-sponsored).

Domestic terrorism: Violent, criminal acts committed by individuals and/or groups to further ideological goals stemming from domestic influences, such as those of a political, religious, social, racial, or environmental nature.

Many factors have contributed to the evolution of the terrorism threat on both the international and domestic fronts, such as:

Differences between organized crimes and terrorism:

The differences between them rest on means and ends:

Linkages of organized crimes with terrorism

Organized crimes and terrorism exist because of ineffective governance and weak law and order set up in a country.

Terrorists can benefit from organized crime as a source of financing or logistical support through the illicit trafficking of arms, persons, drugs, artifacts, and cultural property.

But terrorist groups can also benefit from the illicit trade in natural resources and wildlife, the abuse of legitimate commercial enterprise, donations, and proceeds of criminal activity, including kidnapping for ransom, extortion, and bank robbery, as well as piracy.

As organized crime groups join ever more complex networks spanning the globe, the crimes become increasingly transnational and the types of crime they can commit become diversified.

Linkages between organized crimes and terrorism in India

There are also several insurgent groups that over some time have morphed into crime syndicates. What began as an ideological movement is now merely a means of generating profit. This is especially the case with insurgent groups in Northeast India.

Another significant relationship between organized crime and terrorism, especially in Kashmir, is through the spread of counterfeit currency. Terrorists are the main couriers of Indian counterfeit currency inside Kashmir, which then spreads all over India. Even guides for the militants from across the border are paid with counterfeit money.

The Conference of the Parties to the United Nations Convention on Transnational Organized Crime (UNTOC) identified cybercrime, identity-related crimes, trafficking in cultural property, environmental crime, piracy, organ trafficking, and fraudulent medicine as new and emerging crimes of concern. The emergence of these new crime types gives rise to the need for law enforcement response to adapt its efforts and capacities accordingly.

The Convention represents a major step forward in the fight against transnational organized crime and signifies the recognition by the Member States of the seriousness of the problems posed by it, as well as the need to foster and enhance close international cooperation to tackle those problems.

UNODC supports links between organized crime and terrorism through a variety of projects. This includes initiatives on improving border management, such as profiling high-risk passengers and cargo, facilitating international cooperation, and combating the financing of terrorism.

In 2019, the Security Council adopted resolution 2482, which urged Member States to address the links between terrorism and organized crime, by adopting policy measures.

Great strides have been made to better understand the linkages between terrorists and organized criminal groups owing to the adoption of Resolution 2482 with the emphasis on the following measures:

These can facilitate the legislative, policy, and operational responses.

The linkages exist in regions of poor governance and order. While organized crime involves many activities, its linkages with terrorism stem from the illegal trafficking of drugs, arms, and human beings and money laundering. Terrorist groups, whether indigenous or sponsored by outside states, need arms and money for their fight against the security forces.

Organized crime is not only a national-level threat but has emerged as an international threat, where all the countries must come together and globally respond to it. The police department should be well equipped with trained staff, modern weapons, and increased manpower, we need to increase our cyber security safety,  along with increasing coastal security, with registration on wooden boats which is an easy way for terrorists to enter  India.

The government should introduce hi-tech software to track organized crime groups. Technology, Manpower, and intelligence must work together to organized crime in India, and especially agencies should be formed for this matter.