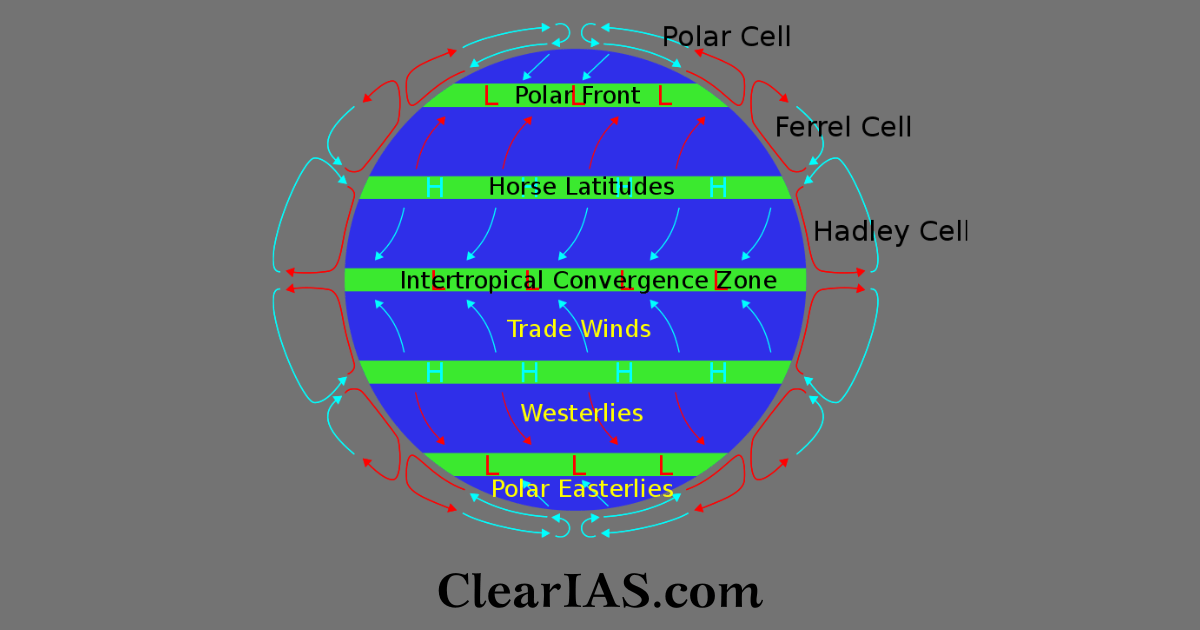 Pressure belts are those areas on the surface of the earth where the same pressure is distributed differently based on latitude. These are developed due to High or Low-Pressure cells.

The atmosphere is a multi-layered gas envelope over the earth’s surface, suspended over the surface due to its gravitational attraction.

Although in mythological studies atmosphere is always considered a mechanical mixture and not a chemical compound.

The mechanical mixture of the atmosphere includes both constant and variable gases, although all the constant gases become variable above 80 km height.

Different types of air pressure on the earth’s surface can be observed in various regions of the world due to a natural occurrence called pressure belts.

High and low-pressure systems are produced by pressure differences that are primarily caused by thermal and dynamic processes, respectively.

Heat causes air to expand, which reduces its density. As a result, low pressure is created.

On the contrary, cooling results in contraction. As a result, the density rises and the pressure rises.

Examples of thermal lows and highs are the formation of equatorial lows and polar highs, respectively.

In addition to temperature changes, the dynamic elements resulting from pressure gradient forces and earth rotation can be used to explain how pressure belts form Coriolis force.

Based on the mass-energy exchange mechanism between the earth and the atmosphere and within the atmosphere several sequential pressure belts can be classified from the equator toward the pole.

There are seven pressure belts on the surface of the world. There are the two Subtropical highs, the two Subpolar lows, the two Polar highs, and the Equatorial Low.

It is a dynamically induced pressure belt developed over subtropical latitudes by regular subsidence of air masses originating from the equator. Subtropical latitudes are referred to symbolically as horse latitudes. It is because subsiding air parcels apply tremendous pressure over the earth’s surface and wind drifts away from the surface to fill the low-pressure vacuum of the equator and sub-polar latitude. Consequently, a vacuum type of atmospheric conditions develops over the surface where the horizontal movement of air parcels remains very low.

It is developed between 55 to 65 degrees northern and Southern hemispheres by several dynamic and thermal components. Relative low-pressure condition is acknowledged over the polar surface since it lies between two prominent high-pressure zones of sub-trophic and polar origin.

Atmospheric conditions over subpolar latitude remain comparatively high to the Polar surface. Consequently, warm and comparatively like their forces of subpolar origin apply less pressure over the surface, creating a low-pressure condition

It is again a thermally induced Pressure Belt characterized by almost incline and solar insolation, less insulation and heating, and subsidence of cold and denser air parcels.

This pressure belt system is an abstract representation. The Pressure belt placement is not fixed.

As they move between the Tropics of Cancer and Capricorn, they move northward in July and southward in January, following the shifting positions of the sun’s direct rays. The belt of maximum temperature usually referred to as the thermal equator also moves north and south of the equator.

There is a shift in pressure belts to the north and south of their yearly average location along with the thermal equator’s movement northward in summer and southward in winter.