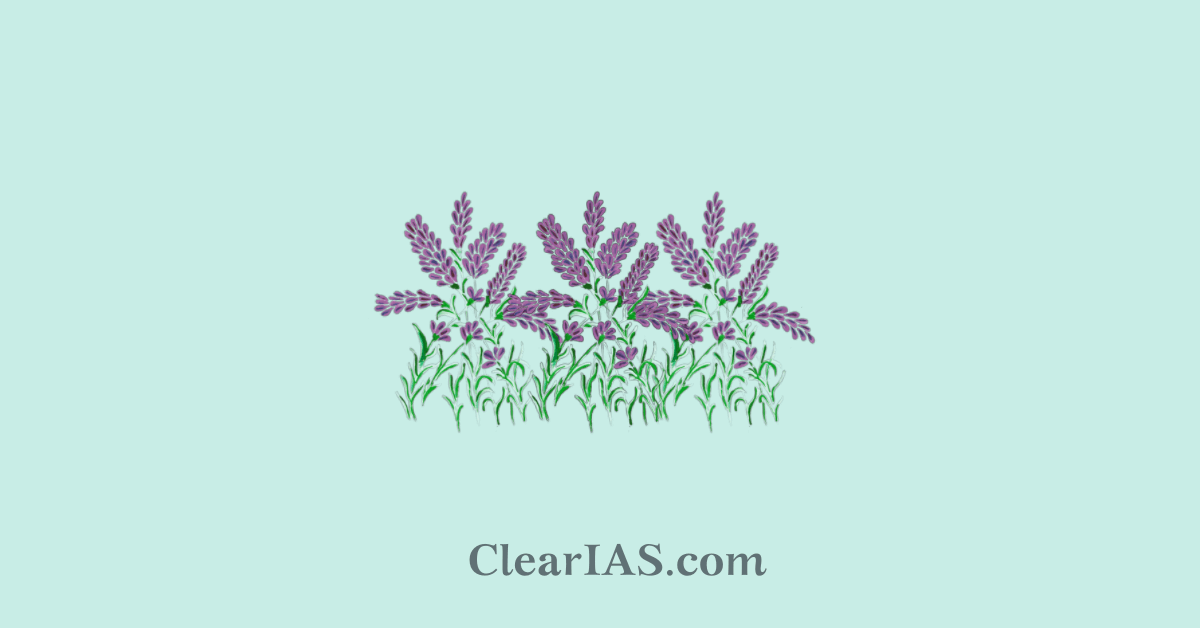 The farmers in Kashmir have moved towards the ‘purple revolution’ under the Aroma mission. They have transitioned away from conventional crops to the more lucrative production of lavender, a purple-bloomed aromatic shrub. Read here to know more about them.

Lavender farming has been practiced in Kashmir and some areas of Jammu since 2007. It is currently assuming a revolutionary scope.

Today, there are lavender farms in each of the 20 districts of J&K. Particular districts that have achieved substantial progress in this area include Kathua, Udhampur, Doda, Ramban, Kishtwar, Rajouri, Srinagar, Pulwama, Kupwara, Bandipora, Budgam, Ganderbal, Anantnag, Kulgam, and Baramulla.

Through targeted interventions in the areas of agriculture, processing, and product development for fostering the growth of the scent industry and rural employment, the CSIR Aroma Mission is intended to bring about transformative change in the aroma sector.

This will help in the production of an additional 700 tonnes of essential oil for perfumery, cosmetics, and pharmaceutical industries, and the use of these oils in value addition and herbal products would generate a business of at least 200 crores.

CSIR’s Aroma Mission aims to increase the income of the farmers through the cultivation of high-value and high-demand aromatic crops by about Rs. 30,000 to 60,000/ha/year.

Scientific interventions would provide assured benefits to the growers of Vidarbha, Bundelkhand, Gujarat, Marathwada, Rajasthan, Andhra Pradesh, Odisha, and other states where farmers are exposed to frequent episodes of weather extremes and account for maximum suicides.

The nodal laboratory is CSIR-Central Institute of Medicinal and Aromatic Plants (CSIR-CIMAP), Lucknow.

The participating laboratories are:

It provided free quality planting material and an end-to-end technology package on cultivation, processing, value addition, and marketing of the Lavender crop to the farmers.

The Ministry of Science and Technology initiated the Purple Revolution or Lavender Revolution in 2016 through the Aroma Mission of the Council of Scientific and Industrial Research (CSIR).

The goal is to promote the indigenous aromatic crop-based agro-economy by shifting from foreign aromatics to homegrown kinds.

Lavender farming was launched as the ‘Aroma Mission’ of the CSIR and Indian Institute of Integrative Medicine, under the Ministry of Science and Technology.

The CSIR has begun Phase II, which will involve more than 45,000 qualified human resources and assist more than 75,000 households, following the success of Phase I.

Officials claim that Jammu and Kashmir’s climate is ideal for growing lavender because this plant can withstand frigid winters and temperate summers.

In September 2022, the country’s first ‘Lavender Festival’ was inaugurated at Bhaderwah, the birthplace of India’s Purple Revolution.

The government has amended the British-enacted Indian Forest Act, which has been in effect for 100 years.

In order to accomplish this, it is crucial to collaborate with businesses from the outset and treat them as equal stakeholders, allowing business needs to guide the selection of research initiatives.

To meet global development goals, we need food systems that are wholesome, sustainable, and inclusive but climate-related issues should also be addressed to avoid their effect on the agriculture sector.

Agriculture around the world, including India, is concerned with important issues like agricultural innovations to increase food security and productivity in a sustainable way, climate-resilient food solutions, resource restoration, the future of farming, agricultural sensors, farming drones, and public health and food safety.