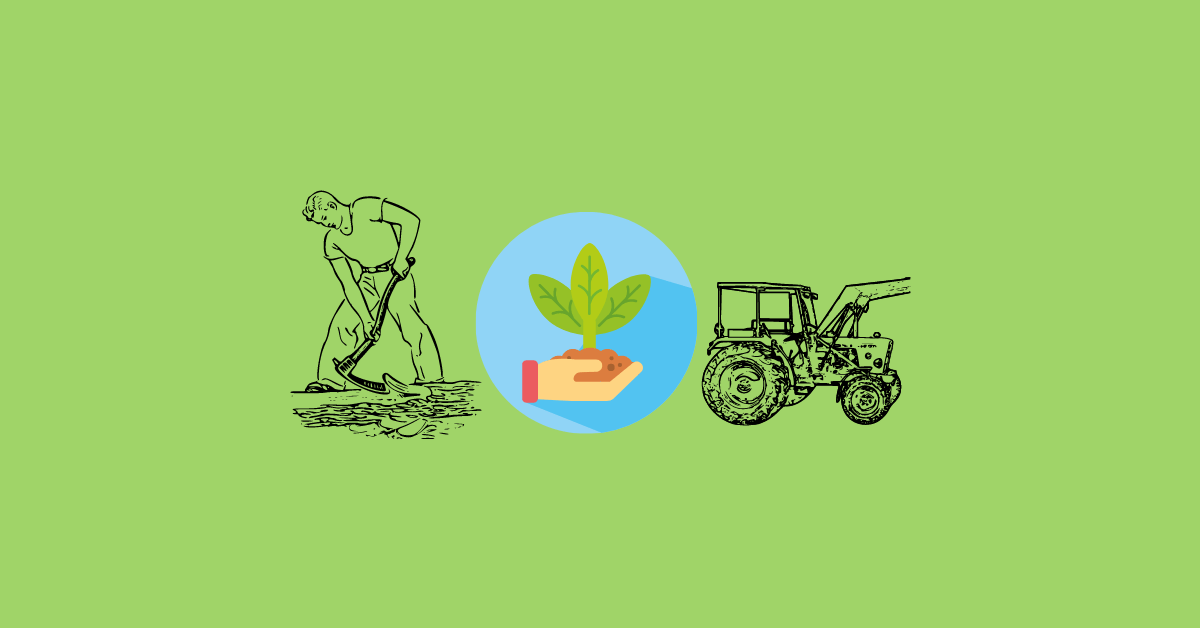 Agriculture is the primary source of livelihood for about 58% of India’s population. Read here to know more about Indian agriculture.

India has one of the largest plain areas of the world-the Indo-Gangetic plain which is immensely fertile.

India has varieties of climatic conditions and soil types.

These physical variations along with factors like availability of irrigation, use of machinery, modern agricultural inputs like High Yielding Varieties (HYV) of seeds, insecticides, and pesticides have played their important roles in the evolution of different farming practices in the Indian agriculture sector.

Types of farming in India

Some of the major types of farming are discussed below.

The majority of farmers in India practice subsistence farming- farming for their consumption. The entire production is largely consumed by the farmers and their families and they do not have any surplus to sell in the market.

In this type of farming, landholdings are small and fragmented; cultivation techniques are primitive and simple. There is a total absence of modern equipment like tractors and farm inputs like chemical fertilizers, insecticides, and pesticides. In this farming, farmers mostly cultivate cereals along with oilseeds, pulses, vegetables, and sugarcane.

Subsistence farming is further classified into:

Primitive subsistence agriculture is practised on patches of land with the help of primitive tools like simple digging tools and community or family labour. This type of farming is monsoon depended along with the fertility of the soil and other environmental conditions. Examples of such types are shifting agriculture and nomadic herding.

Intensive subsistence agriculture is done on small lands with simple tools and more labour. The produce is enough for local consumption and to be sold outside. The sunny climate and fertile soil for most of the year permit the cultivation of more than one crop annually on the same plot. Rice, wheat, maize, pulses, and oilseeds are generally cultivated.

The basic difference between these two types of farming is the amount of production per unit of land. In comparison with temperate areas of the USA, Canada, India do not practice extensive cultivation.

When a large patch of land is used for cultivation then we call it extensive farming. Here, total production may be high due to the larger area but per unit are production is low.

Intensive Farming records high production per unit of land. An example of intensive cultivation is in Kerala where the availability of land for cultivation is very limited.

It is just the opposite of subsistence farming as most of the produce is sold in the market for earning money. In this system, farmers use inputs like irrigation, chemical fertilizers, insecticides, pesticides, High Yielding Varieties of seeds, etc.

Some of the major commercial crops grown in different parts of India are cotton, jute, sugarcane, groundnut, etc.

Rice farming in Harayana is mainly for commercial purposes as people of this area are predominantly wheat eaters. However, in East and North-Eastern states of India, rice cultivation would be large of subsistence type.

Tea, coffee, rubber, banana, and spices are all examples of plantation crops. Most of these crops were introduced in India by the Britishers in the 19th Century

When both raising crops and rearing animals are carried on simultaneously it is called mixed farming. Farmers engaged in mixed farming have economical advantages as well.

All classifications are based on the nature and purpose of farming hence they may overlap in some cases. For example, Banana is a plantation type of farming but can also be classified as commercial farming.

Subsistence Agriculture: Most parts of India have subsistence agriculture which has been practised in India for several hundreds of years and still prevails.

The pressure of population on Agriculture: Despite the increase in urbanization and industrialization, about 70% of the population is still directly or indirectly dependent on agriculture.

Monsoon dependency: Despite the large-scale expansion, only about one-third of the total cropped area is irrigated today. As a consequence, two-thirds of cropped areas are still dependent upon the monsoon.

Variety of crops: Since India has both tropical and temperate climates, crops of both climates are found in India. There are very few countries in the world that have variety comparable to that of India. You would realize that when we would discuss the different types of crops in detail.

The predominance of food crops: The production of food crops is the priority of the farmers almost everywhere in the country.

Seasonal patterns: India has three distinct agricultural/cropping seasons- Kharif, rabi, and Zaid. In India, there are specific crops grown in these three seasons. For example, rice is a Kharif crop whereas wheat is a rabi crop.

The challenges faced by Indian agriculture can be broadly grouped into two categories- the long-standing problems and the emerging issues from the prevailing agricultural practices, system, changing climate, and economy.

Stagnation in Production of Major Crops: Production of some of the major staple food crops like rice and wheat has been stagnating for quite some time. This is a situation that is worrying our agricultural scientists, planners, and policymakers as it creates a huge gap between the demand of the ever-growing population and the production.

Soil Exhaustion: Green revolution has played a positive role in reducing hunger in India but has negative consequences also. One of which is Soil exhaustion which means the loss of nutrients in the soil from farming the same crop over and over again.

Ground Water depletion: The second negative consequence of the green revolution is the depletion of fresh groundwater. Most of the irrigation in dry areas of Punjab, Haryana, and Western Uttar Pradesh was carried out by excessive use of groundwater. Today fresh groundwater situation in these states is alarming.

Global Climatic Change: It has been predicted that climate change’s impact on Indian agriculture would be immense. It is predicted that due to climate change, the temperature would increase, leading to an increase in sea level, more intense cyclones, unpredictable rainfall, etc. These changes would adversely affect the production of rice and wheat. Specifically, a rise in temperature in winter would affect the production of wheat in north India. Production of rice would be affected in coastal areas of India due to the ingress of saline water and an increase in the frequency of cyclones.

Impact of Globalisation: All developing countries have been affected by globalization. The most evident effect is the reduction in farmers’ income and the threat to the viability of cultivation in India. This is due to the rising input costs and falling output prices. This reflects the combination of reduced subsidy and protection to farmers. Trade liberalization exposes these farmers to competition from highly subsidized production in the developed world.

Providing Food Security: Before the introduction of the green revolution in India, we were not self-sufficient in terms of our food grain production. But last few decades agriculture is not growing with the increasing population and to ensure food security factors like accessibility, affordability as well nutritional value of the food available should be catered to.

Farmers Suicides: The farmer suicides appear concentrated in regions of high commercialization of Indian agriculture and very high peasant debt. Cash crop farmers seemed far more vulnerable than those growing food crops. Commercialization of the countryside along with a massive decline in investment in agriculture was the beginning of the decline. Privatization of many resources has also compounded the problems.