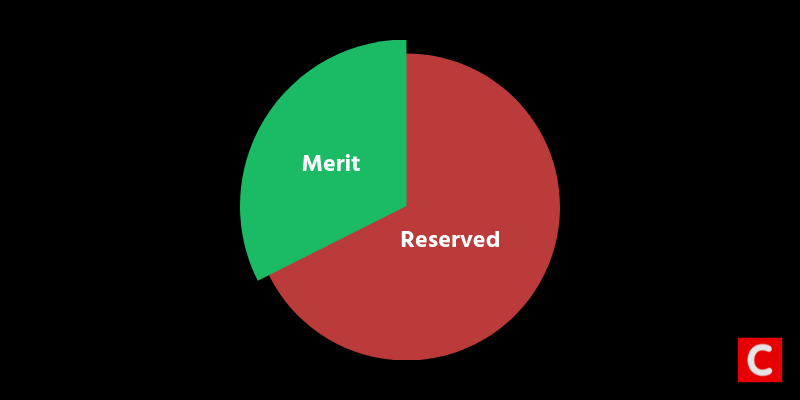 What is meant by reservation or affirmative action?

In simple terms, reservation in India is all about reserving access to seats in the government jobs, educational institutions, and even legislatures to certain sections of the population.

Also known as affirmative action, the reservation can also be seen as positive discrimination. Reservation in India is a government policy, backed by the Indian Constitution (by means of various amendments).

The purpose of reservation in India

The two main aims to provide reservation as per the Consitution of India are:

The extent of Reservation in India

In India, reservation is provided in:

Before 2019, the reservation was provided mainly on the basis of social and educational backwardness (caste). However, after the 103rd constitutional amendment in 2019, economic backwardness is also considered.

A vacancy reserved for SCs or STs or OBCs cannot be filled by a candidate other than an SC or ST or OBC candidate, as the case may be.

As seen from the above table, about 60% of seats are reserved in India –  for various sections like ST, SC, OBC, and EWS – with respect to Government jobs and Higher Education Institutions. 3% of seats are also reserved for differently-abled persons across all categories.

This also means that only 40% of seats are available under merit. In the merit seats, not only the general category candidates but all other categories like SC, ST, OBC, and EWS can also compete.

The objective of providing reservations to the Scheduled Castes(SCs), Scheduled Tribes (STs) in services is not only to give jobs to some persons belonging to these communities. It basically aims at empowering them and ensuring their participation in the decision-making process of the State.

Besides, the state is also keen to end practices such as untouchability.

There is no concept of ‘creamy layer’ with respect to SC/ST reservation. This means that irrespective of the income status or the government posts held by the parents, children of SC/ST parents will get SC/ST Reservation.

Reservation for Other Backwards Classes (OBC) was introduced based on the Mandal Commission Report (1991). The quota for OBCs is 27% in government jobs and higher educational institutions.

The creamy layer concept brings income and social status as parameters to exclude some of the privileged members of OBC from the extent of reservation. This concept also keeps a check to ensure that the benefits of reservation do not get extended to subsequent generations.

The Central Government of India recently introduced EWS Reservation. 10% quota is provided for the Economically Weaker Sections (EWS) among General Category candidates in government jobs and educational institutions. This is done by adding clauses for the same in the Indian Constitution (103rd Constitution Amendment Act, 2019).

History of Reservation System in India – Rectifying the Historical Injustice

To an extent, reservation as a policy is pursued by the State to correct the historical injustice done to certain castes by the so-called “upper castes”. The caste system prevailed in India had alienated many “lower castes” from the mainstream – hindering their development. To a great extent, the repercussions are still felt.

It’s the duty of the government to provide equality of status and opportunity in India.

Reservation is one of the tools against social oppression and injustice against certain classes. Otherwise known as affirmative action, reservation helps in uplifting backward classes.

However, reservation is just one of the methods for social upliftment. There are many other methods like providing scholarships, funds, coachings, and other welfare schemes.

The way the reservation is implemented and executed in India is largely governed by vote-bank politics.

Initially, the reservation was intended only for SC/ST communities – that too for a period of 10 years (1951-1961). However, it got extended ever since. After the implementation of Mandal Commission report in 1990, the scope of the reservation was widened to include Other Backward Communities (OBCs).

The benefits of the reservation were successively enjoyed only by a few communities (or families), excluding the truly deserving ones. Even 70 years after independence, the demand for reservation has only increased.

Now, with the introduction of economic criteria for reservation, in addition to the caste-criteria which already existed, things have become more complicated.

Unequals should not be treated equally, but is reservation the only solution?

There is no doubt that unequals should not be treated equally. However, is the current system of unequal treatment perfect? Is it creating more injustice? Is it the only way out in a welfare-nation? It’s time to introspect.

Reservation based entirely on economic criteria is not an all-in-one solution, though family income can be one of the parameters. Also, its time to fix a time period for the reservation system – rather than extending it to eternity.

Denying India, the service of the meritorious candidates, who see them being overtaken by others with lesser academic performance or brilliance, is also a crime and injustice.

Aren’t there any alternative mechanisms to uplift the marginalised so that everyone gets equal opportunities? How is affirmative action done in other countries?

Reforms in the reservation system of India is the need of the hour. However, as the subject of reservation revolves around a lot of votes, parties are reluctant to disrupt the existing system.

In Indra Sawhney vs Union Of India, 1992, the Supreme Court of India capped caste-based reservation, ruling that “no provision of reservation or preference can be so vigorously pursued as to destroy the very concept of equality”.

“Since this Court has consistently held that the reservation under Articles 15(4) and 16(4) should not exceed 50% and the States and the Union have by and large accepted this as correct it should be held as constitutional prohibition and any reservation beyond 50% would liable to be struck down.”

While introducing the bill for Economic Reservation in 2019, Arun Jaitley (Finance Minister) contended that the 50% cap on reservations imposed by the Supreme Court was only for caste-based reservations, and the Economically Weaker Section (EWS) reservation won’t be impacted by it.

Poverty cannot be the basis to provide reservation: SC

As per Article 16(4), one of the main purposes of reservation is to provide adequate representation of all classes (castes) in government services. Economic Reservation introduced by Article 16(6) is actually against this concept – as it does not take into consideration the caste-based representation.

Moreover, the reservation is not a poverty alleviation scheme.

Supreme Court had also ruled that economic status cannot be the sole criterion for reservation.

Many states had tried to implement Economic Reservation, however, they were subsequently quashed by Courts.

Introducing EWS bill in 2019, Union Social Justice and Empowerment Minister Thaawarchand Gehlot said the similar state laws for EWS quota were quashed by Courts because there was no provision for economic reservation in the Constitution before.  Now, the Law will not be struck down by the Supreme Court if challenged as it has been brought by making required provisions in the Constitution.

Will Reservation System in India compromise the Merit (and efficiency of the system)?

Article 335 of the Indian Constitution states that

The claims of the member of the Scheduled Castes and the Scheduled Tribes shall be
taken into consideration, consistently, with the maintenance of efficiency of administration in
the making of appointments to services and posts in connection with the affairs of the Union
or of a State.

Provided that nothing in this article shall prevent in the making of any provision in
favour of the members of the Scheduled Castes and the Scheduled Tribes for relaxation in
qualifying marks in any examination or lowering the standards of evaluation, for reservation in
matters of promotion to any class or classes of services or posts in connection with the affairs
of the Union or of a State.

There is no second question that all castes/classes should be adequately represented in government services. However, which percentage can be called adequate – without compromising the merit or efficiency of the administration?

Is the current level of reservation adequate? Or is it less? Or has it already compromised the merit? What do you think?