Do you belong to Other Backward Classes (OBC)? What is the OBC reservation eligibility?

Non-Creamy Layer candidates from OBC are entitled to reservations in jobs as well as educational institutions. However, many candidates (and even some bureaucrats) are ignorant about the provisions of the OBC reservation.

If you are a deserving candidate belonging to the OBC category, you should not miss the benefits of an OBC reservation (due to ignorance). In this post, we shall see the criteria for determining whether you fall under OBC Creamy Layer or OBC Non-Creamy Layer.

Other Backward Classes (OBC) are socially and educationally backward classes in India. OBCs are distinct from Scheduled Classes (SC) or Scheduled Tribes (ST).

The Central Government of India maintains a list of castes/communities to be considered as OBC.

To uplift Other Backward Classes (OBC), both the Central Government and State Governments are running a lot of programs and schemes. Some benefits include:

Will all OBCs get the reservation benefit?

Only if you belong to Non-Creamy Layer OBC, you will get the reservation in jobs as well as in educational institutions.

If you fall under the Creamy Layer of OBC, you will not get the benefit of an OBC reservation.

Origin of Creamy Layer concept with respect to OBC 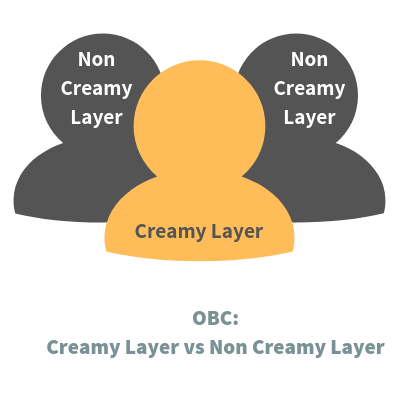 Due to the recommendations of the Mandal Commission, the Central Government issued an Office Memorandum to reserve 27% posts in central government services. The order was challenged by Indra Sawhney (Indra Sawhney and Others Vs Government of India) in Supreme Court (1992).

The constitutional bench of the apex court upheld the decision to reserve 27% reservation for OBC’s in Central Government service. But in the verdict, Honorable Supreme Court cleared that the creamy layer among OBC’s should be excluded from the reservation.

Note: There is no concept of the creamy layer with respect to SC/ST reservation.

How can you know if you get OBC Reservation?

Central Government maintains a list of castes or communities which are given OBC status. Check the Central List of OBCs – based on your state. If your caste or community is mentioned there, you can apply under OBC quota – provided you meet the Non-Creamy Layer criteria as well.

If the candidate’s community is mentioned in the above list, then the next step is to check whether he/she belongs to the creamy layer or to the non-creamy layer. You should note that reservations are offered only to candidates belonging to the OBC non-creamy layer. 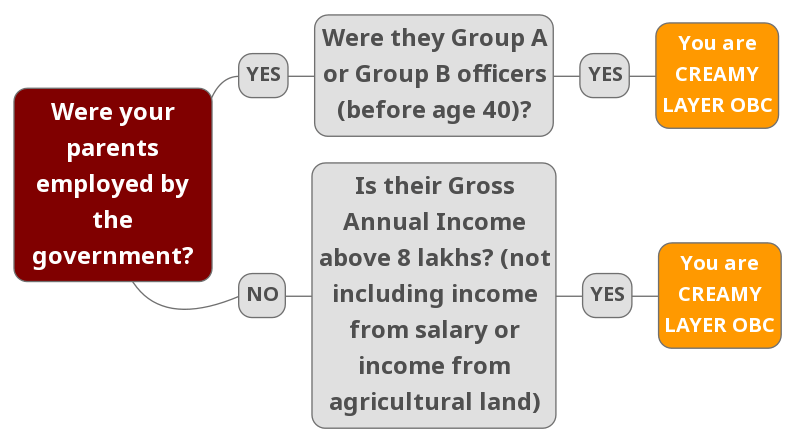 The creamy layer is based on the status of your parents.

For the jobs under the Central Government, if the parents of an applicant entered the service as Class I officer before the age of 40 (direct recruitment), the applicant is considered as a creamy layer.

Who comes under Non-Creamy Layer OBC?

Except for the above children of the above-mentioned employees, almost all get the benefit of “Non-Creamy Layer” Status.

Income Limit of determining the Non-Creamy Layer Status of OBCs

In order to qualify as an OBC non-creamy layer candidate, the applicant’s parents’ annual income should be less than Rs. 8 lakhs.

Salary and agricultural income are not to be considered as income for calculating annual income for creamy layer status. As far as the Government employees are considered, the entry cadre/post is to be taken into consideration.

While applying the “Income/Wealth Test” to determine the creamy layer status of any candidate, income from the salaries and income from the agricultural land shall not be taken into account. It means that if income from other sources other than the salary and agriculture exceeds the income limit, then only the candidates shall be treated as Creamy Layer.

Who is the authority to issue the OBC Non-Creamy Layer Certificate?

Please find below some useful links to application forms and certificates (proforma):

Will the candidate’s Income be also included while determining the family income with respect to Non-Creamy Layer status?

You may note that ”Income” here refers only to the income of the parents and not the candidate’s income.

In short, the candidate’s income is not considered for determining the Non-Creamy Layer Status of OBCs.

One of the best resources for any clarification regarding OBC reservation is NCBC (National Commission For Backward Classes) Website. For additional queries or concerns, refer the documents listed below:

What is the validity of an OBC Non-Creamy Layer Certificate?

The Non-creamy Layer (NCL) Certificate would be applicable to OBC candidates who are covered under the Income/Wealth Test criterion. The income limit is decided on the basis of income earned during three previous financial years preceding the year of appointment.

To illustrate, the validity of non-creamy layer certificate issued during any month of the financial year 2016-17 covering 3 preceding financial years viz. 2013-14, 2014-15 and 2015-16 be accepted by the concerned authorities for any appointments or recruitments which would be valid during the period April 2016 to March 2017.

With respect to exams conducted by UPSC, the candidates are expected to possess certificates dated than the closing date of the application for the preliminary exam. For example, with respect to UPSC CSE Prelims 2019, the OBC certificate should be dated before 18th March 2019.

While the OBC status of a candidate may change only when the community of the concerned candidate is removed from the OBC list, his/her creamy layer status may change at any time. Therefore, it is not possible to determine a fixed validity period for the OBC certificate.

However, for most practical purposes, the validity of an OBC NCL Certificate is treated like 1 year. If your OBC NCL certificate was obtained before 1 year, it is always better to get a new OBC NCL before applying for exams.

Also, it is advisable to get the OBC NCL Certificate in either English (prefered) or Hindi.

What if you fall under OBC creamy layer?

Candidates who fall under OBC creamy layer (parents’ annual income more than 8 lakhs) are treated as general category students. They do not have any reservations at the Government institutions.

They can compete in general merit.

The purpose of OBC reservation (non-creamy layer), is to uplift the most deserving candidates among backward classes. Except for the most privileged, most of the OBC candidates usually come under Non-Creamy Layer OBC.

However, many eligible candidates are not aware of how to obtain the required certificate.

By going through the provisions of the government regarding non-creamy layer criteria in detail, you can claim your deserving quota without any harassment from the authorities.

Let us know in the comments if you face any issues regarding the OBC non-creamy layer certificate. Either our team or fellow readers or aspirants will definitely help.