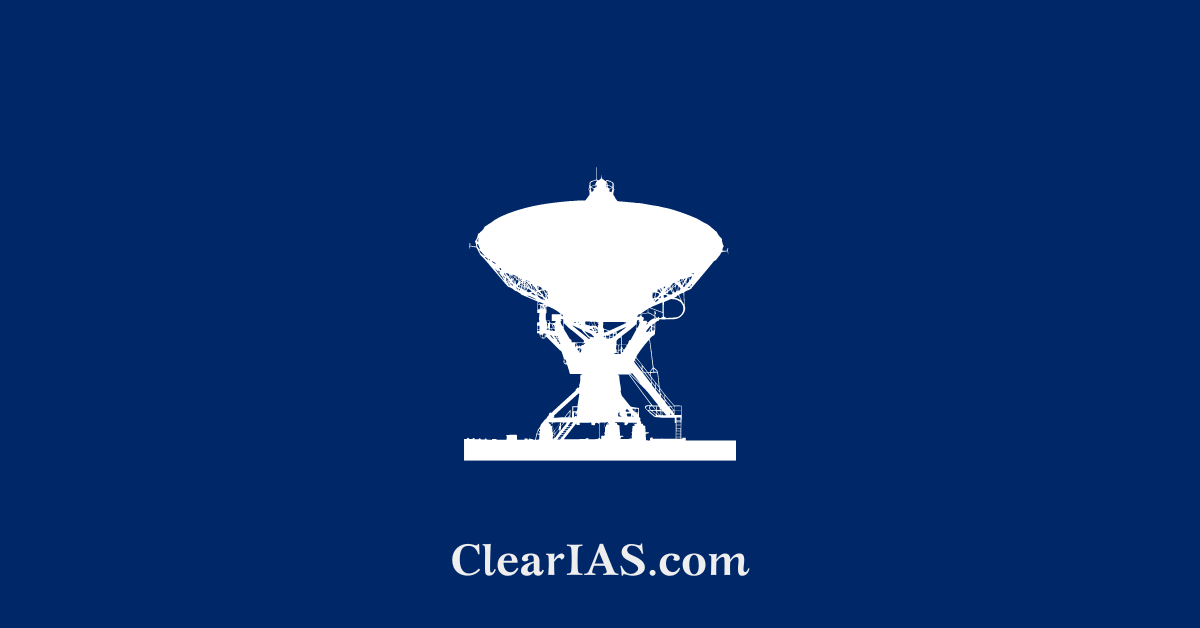 SARAS 3 (Shaped Antenna measurement of the background Radio Spectrum 3) telescope is an indigenously developed radio telescope of India. Recently, the SARAS radio telescope has provided astronomers with clues to the nature of the Universe’s first stars and galaxies. Read here to learn more about SARAS, radio telescopes, and related theories.

There are a variety of ground- and space-based telescopes looking into the sky for a deeper understanding of the Universe. Humans have attempted to capture the faint signals arising from the depths of the cosmos to know about how the early stars and galaxies formed and what they looked like.

This provides an insight into the properties of the earliest radio-loud galaxies that are usually powered by supermassive black holes.

What are radio telescopes?

The purpose of a radio telescope is to detect radio-frequency radiation from extraterrestrial sources, such as stars, galaxies, and quasars, between the wavelengths of around 10 meters (30 megahertz [MHz]) and 1 mm (300 gigahertz [GHz]), using a radio receiver and an antenna system.

Since radio wavelengths are much longer than those of visible light, radio telescopes must be very large to attain the resolution of optical telescopes.

The first radio telescope was built in 1937 by Grote Reber of Wheaton, U.S.

Radio telescopes vary widely, but they all have two primary components:

The sensitivity of a radio telescope is the ability to measure weak sources of radio emission.

Radio astronomy has the advantage that sunlight, clouds, and rain do not affect observations

What are Radio waves?

Radio waves have the longest wavelengths in the electromagnetic spectrum. They range from the length of a football to larger than our planet.

Heinrich Hertz proved the existence of radio waves in the late 1880s.

Astronomical objects that have a changing magnetic field can produce radio waves. The radio astronomy instrument called WAVES on the WIND spacecraft recorded a day of bursts of radio waves from the Sun’s corona and planets in our solar system.

It was deployed over Dandiganahalli Lake and Sharavati backwaters, located in Northern Karnataka, in early 2020.

SARAS plans to design, build, and deploy a precise radio telescope in India to detect incredibly faint radio wave signals from the depths of time, from our “Cosmic Dawn,” when the first stars and galaxies formed in the early Universe.

In a first-of-its-kind work, using data from SARAS 3, researchers from the Raman Research Institute (RRI), Bengaluru, the Commonwealth Scientific and Industrial Research Organisation (CSIRO) in Australia, along with collaborators at the University of Cambridge and the University of Tel-Aviv, estimated the energy output, luminosity, and masses of the first generation of galaxies that are bright in radio wavelengths.

SARAS 3 has improved our understanding of the astrophysics of Cosmic Dawn, telling us that less than 3 percent of the gaseous matter within early galaxies was converted into stars.

Also, the earliest galaxies that were bright in radio emission were strong in X-rays, which heated the cosmic gas in and around the early galaxies