In this article, we discuss solar energy and its importance. We will also see the Solar energy potential of India, India’s installed solar energy capacity, various measures taken by the government to promote solar energy, and the various challenges in the adoption of solar energy.

Coal currently accounts for about 55% of India’s energy requirements. However, this results in significant Green House gas emissions.

If India needs to achieve its Nationally Determined Contribution (NDC) under the Paris agreement, we need to rely more on renewable energy.

In this context, the adoption of renewable sources of energy assumes significance.

Recently, the road transport and highway minister announced that the government is working on developing electric highways powered by solar energy.

This is expected to facilitate the charging of heavy-duty trucks and buses.

This signifies India’s commitment to the adoption of renewable sources of energy in the present energy-strapped world.

In this context let us discuss the solar energy potential of India and analyze where India stands in the global arena in the march towards the attainment of energy security.

India is endowed with vast solar energy potential. About 5,000 trillion kWh per year of energy is incident over India’s land area with most parts receiving 4-7 kWh per sq. m per day. Solar photovoltaics power can effectively be harnessed providing huge scalability in India.

The National Institute of Solar Energy has assessed the Country’s solar potential of about 748 GW assuming 3% of the wasteland area to be covered by Solar PV modules.

India in its nationally intended has set an ambitious target to achieve a capacity of 175 GW worth of renewable energy by the end of 2022, which expands to 500 GW by 2030. This is the world’s largest expansion plan in renewable energy.

India was the second largest market in Asia for new solar PV capacity and third globally (13 GW of additions in 2021). It ranked fourth for total installations (60.4 GW), overtaking Germany (59.2 GW) for the first time. 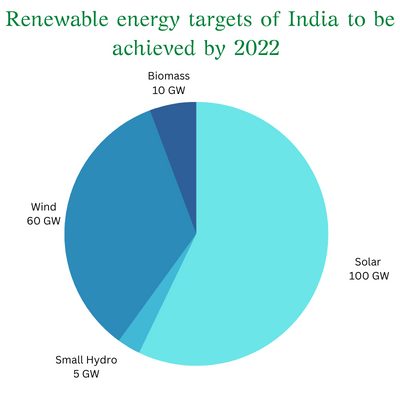 Some of the most notable Solar Energy Challenges in India include:

There is an immediate necessity to develop the entire value chain ecosystem to become competitive and achieve sustainable growth in the long run.