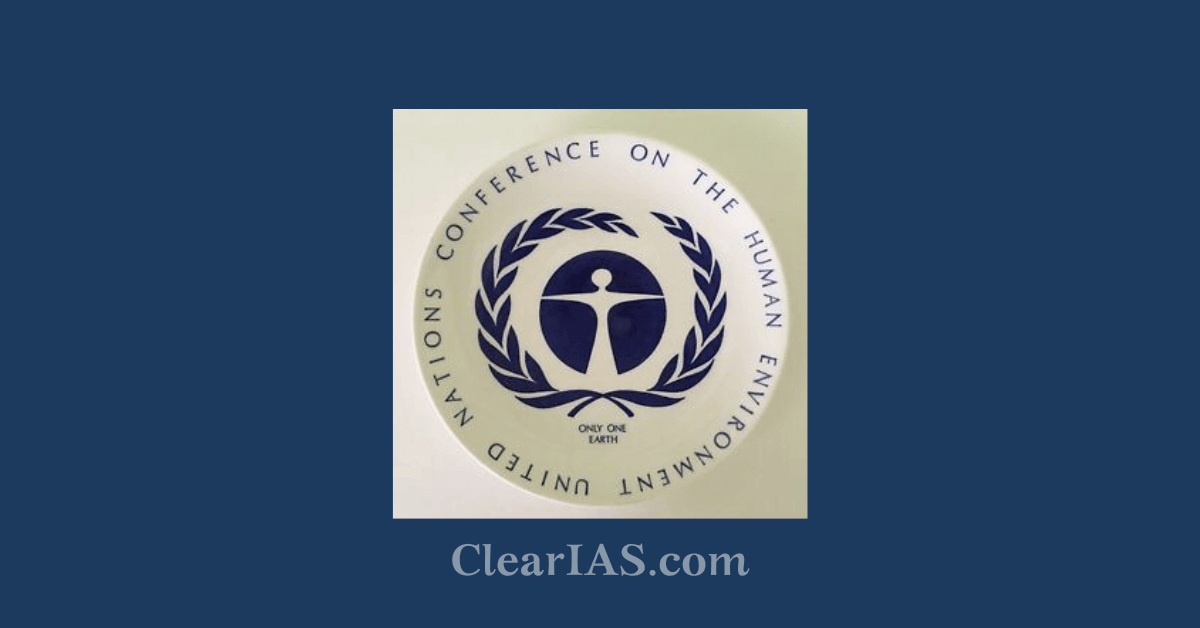 Stockholm Declaration: UN Conference on the Human Environment or the Stockholm conference was held in 1972. Read here to know more about it.

Stockholm+50 is being held in Stockholm, Sweden. It commemorates the 50 years since the United Nations (UN) Conference on the Human Environment (also known as the Stockholm Conference) was held in 1972.

By recognizing the importance of multilateralism in tackling the Earth’s triple planetary crisis – climate, nature, and pollution – the international meeting aims to drive action toward a healthy planet for the prosperity of all.

The theme of the meeting is “A Healthy Planet for the Prosperity of All – Our Responsibility, Our Opportunity”

Stockholm+50 is a timely opportunity to reinforce the 1972 principles and to generate urgent actions for a healthy planet for the prosperity of all by:

The 1972 United Nations Conference on the Environment in Stockholm was the first world conference to make the environment a major issue.

The participants adopted a series of principles for sound management of the environment including the Stockholm Declaration and Action Plan for the Human Environment and several resolutions.

In addition, these categories were broken down into 109 recommendations.

One of the major results of the Stockholm conference was the creation of the United Nations Environment Programme (UNEP).

The Stockholm conference of 1972 is of great importance as the lead to countries establishing environment ministries for the first time.

In 1985, India set up its ministry of environment and forest.

Principles of the Stockholm declaration

The 26 principles on the human environment are dealt with in great detail. For better understanding, the principles are grouped on their applicability and enforceability. They are as follows:

Principle 1: Rights and Responsibilities for protecting the environment – Humans have the right to use and enjoy nature. The right to enjoy nature is not unfettered, it is coextensive with the duty to protect it. Art. 21 of the constitution also safeguards the fundamental right of a healthy environment. This principle also explicitly bars discriminatory laws.

Principle 15: Human settlement and Urbanization – Planned settlements and urbanization are required. They reduce the adverse effects on the environment. The goal is to secure maximum benefits for all through planning. All discriminatory plans are also barred.

Principle 4: Wildlife Conservation – A combination of factors is responsible for endangering wildlife. Humans have a special responsibility for protecting wildlife. The inclusion of conservation of wildlife in economic planning leads to sustainable development.

Principle 13: Rational Management of Resources – States should adopt rational methods to manage the resources and to improve the environment. An integrated and coordinated approach is preferable.

States have the absolute authority to use natural resources according to their policies. However, their policies shouldn’t violate the principles of international law and cause damage to other states outside its jurisdiction.

Principle 6: Management of pollution – Pollution is harmful to the environment. Discharging toxins and other substances in large quantities are harmful to the ecosystem. Both the citizens and the states should play an active role in reducing the dumping of harmful substances.

Principle 7: Management of sea pollution – The states should reduce sea pollution by taking necessary steps to prevent substances hazardous to human health, marine life, and the legitimate uses of seas.

Principle 8: Social and Economic development – The improvement of social and economic conditions is necessary for a better living and working environment. Improvements shouldn’t affect the environment in any way.

The States should join to further the scope of international law for prescribing liability for those harming the environment. States should also come together to compensate victims of environmental pollution or damage.

Principle 24: Cooperation with nations – Although each state has exclusive jurisdiction to legislate on internal matters, international cooperation is necessary for the holistic improvement of the environment. States must recognize that environmental problems affect all the states equally. By multilateral and bilateral agreements states can control, prevent, and reduce environmental risks.

Principle 25: Coordination with nations – Coordination between states is crucial for alleviating the existing conditions. The states can jointly coordinate actions and plans for improving existing environmental conditions.

Principle 11: Environmental Policy – The environmental policy of every nation should be progressive. The policies of every state must enhance and complement each other. The policies shouldn’t restrict or adversely affect developing countries. National and international organizations should strive for better living conditions for all without affecting the environment.

Principle 20: Expanding scientific research – Researching and developing methods nationally and internationally is important to tackle environmental problems. There must exist a system where information and research can flow easily across nations. Countries must also control their spending on scientific research without burdening the economy.

Principle 9: Environmental Deficiencies – Natural disasters and underdevelopment lead to deficiencies. Navigating through such deficiencies is difficult. Requesting technological and financial assistance to supplement the local efforts leads to a quicker and effective remedy.

Principle 16: Population Control – In areas where the population is excessive and is likely to affect the environment, the states can implement policies to control the growth of the population. These policies shouldn’t violate basic human rights. In today’s world overpopulation is one of the major reasons for the depletion of natural resources.

Principle 17: Setting up of national institutions – States should establish national bodies for the control and management of environmental resources within the state.

Principle 23: Implementing a national agenda – The states may find that certain procedures and rules may not align the value system of the country. In that case, the states need not follow such a procedure. The states are also exempted if such procedures cause unwarranted social costs.

50 years of Stockholm declaration: UN Conference on the Human Environment

1972: The United Nations Conference on the Human Environment is convened.

1973: UNEP opens headquarters at Nairobi, Kenya marking the first time an international organization was based in the Global South.

1973: States adopt the Convention on International Trade in Endangered Species (CITES) of Wild Fauna and Flora.

1973: On 5 June, the world celebrates the first World Environment Day under the theme of “Only One Earth.”

1982: UNEP launches the Montevideo Programme for global environmental law-making and lead to major agreements, including the Basel, Stockholm, and Rotterdam conventions, and the Montreal Protocol.

1987: World adopts the Montreal Protocol on Substances that Deplete the Ozone Layer

1988: Launch of the Intergovernmental Panel on Climate Change (IPCC)

1992: The UN Conference on Environment and Development, also known as the Earth Summit, takes place in Rio de Janeiro on the 20th anniversary of the 1972 Stockholm conference.

2001: States adopt the Stockholm Convention on Persistent Organic Pollutants and Carpathian Convention (to protect the Carpathian Mountains, a region home to some of Europe’s oldest forests and more than half of the continent’s bears and wolves).

2012: States establish the Intergovernmental Platform on Biodiversity and Ecosystem Services

2015: States adopt the 2030 Agenda and the Sustainable Development Goals.

2017: At the third session of the UN Environment Assembly in Nairobi, the world committed to a pollution-free planet to improve the lives of billions across the globe by cleaning our land, air, and water.

2021: The UN Decade of Ocean Science for Sustainable Development begins

2022: At the fifth session of the UN Environment Assembly in Nairobi, a historic resolution is endorsed to end plastic pollution and forge an international legally binding agreement by 2024.

The wordings of the stockholm declaration are unclear and ambiguous at certain points. Almost 48 years since adopting the declaration the condition of the environment has worsened.

The presence of Carbon Dioxide has increased by 26 percent since 1970. This results in greater global warming which has detrimental effects all around the globe. More than 700,000 sq.km of the Amazon rainforest were cleared for farming since the ’70s. The condition of other forested areas is not much better.

It has failed to include newer forms of pollution. It has not received the same kind of response from all the nations. The plan identifies underdeveloped nations as the key contributor to pollution, 48 years later they continue to pollute the environment without any significant change.

Taking action is the only way to tackle environmental depletion. The laws should adopt more stringent actions. No amount of conventions will help in environmental development unless people start taking action. We should realize the current situation and act cautiously.

The world needs to work in tandem to reverse the harm caused to the environment over years of anthropogenic activities.

Despite its problems, the convention has created better awareness about the environment and the need to protect it. People are now better equipped to tackle problems like global warming and climate change.

This UN conference laid the foundation for several other initiatives by the UN and other organizations around the world for the protection and preservation of the environment.

The progress after Stockholm Declaration will be critically adssesses as Stockholm+50 will be collaborative and multi-stakeholder in nature, open to all participants who will be invited to share experiences and initiatives to protect the planet and contribute to sustainable and inclusive development, including a sustainable recovery from the COVID -19 pandemic.

Stockholm+50 can work towards setting specific deadlines for realizing the goals driven towards a sustainable environment.