With the dedication to “Development with Dignity,” “Empowerment without Appeasement,” and “Sabka Sath, Sabka Vikas, Sabka Vishwas,” which guarantees equal benefits to all sections of society, the government has made every segment of society an equal partner in progress. Regardless of caste, religion, location, or community is at the heart of the government’s welfare programs.

Before discussing these programs, let us examine who are minorities and what are the constitutional provisions related to them.

Who are the minorities that the Indian government has notified?

Currently, the only communities considered minorities are those that have received central government notification pursuant to section 2(c) of the NCM (National Commission for Minorities) Act, 1992.

Despite the fact that the National Commission for Minorities (NCM) Act of 1992 gave the Center “unbridled power” to inform minorities, the Supreme Court’s 11-judge bench decision in the T.M.A. Pai case made it clear that linguistic and religious minorities should be identified at the state level as opposed to the national level.

The MC was renamed the NCM in 1992 after the NCM Act, 1992, which made it a statutory organization.

As a minority community, Jains were also informed in 2014. 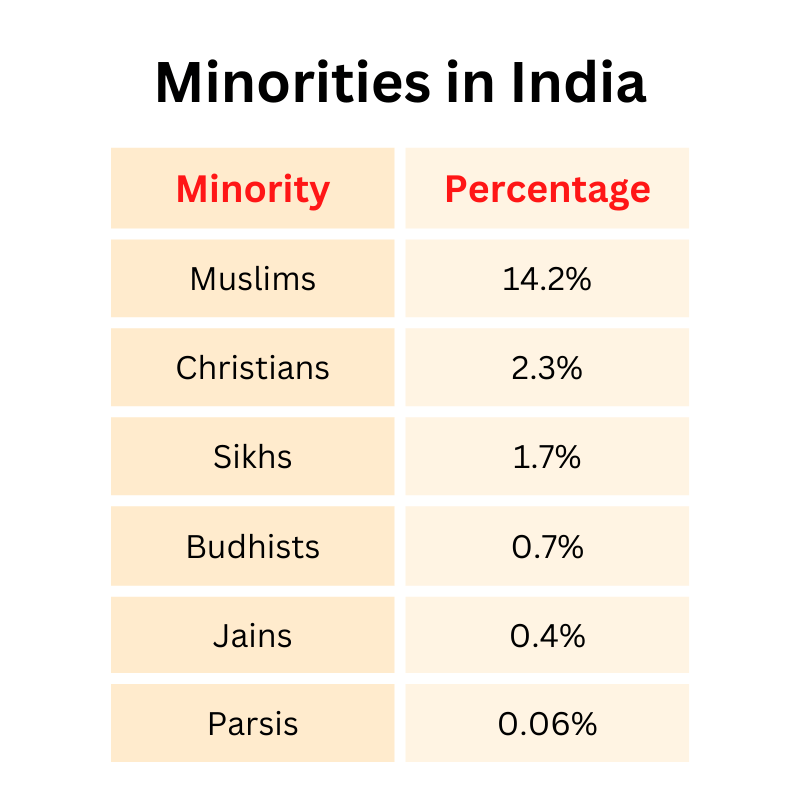 Related constitutional provisions and their classification

The Constitution does not define a minority. Articles 29 and 30 of the Constitution recognize India’s linguistic and religious minorities, respectively.

Article 29 states that any group of individuals living in any area of India who speak a unique language, use a unique script, or have a unique culture have the same rights as minorities in India to preserve those things. Both the majority and the minorities (both religious and linguistic) are subject to Article 29. It also covers the rights of minorities in India to campaign for language protection. Therefore, political remarks about this are acceptable.

Currently, the Central Government of India determines the religious minorities in India whereas the state governments of India identify the linguistic minorities on a state-by-state basis.

The Supreme Court rejected a request for rules to “identify and characterize” religious minorities in every State to safeguard their interests and culture. In the States where they are underrepresented in numbers, the petition aimed to recognize Hindus as a minority group.

It can be said that all these schemes aim to provide better socio-economic facilities to minority communities, particularly in the field of education, health, and skill development.  This would eventually reduce the gap between the national average and the minority communities with regard to backwardness parameters.