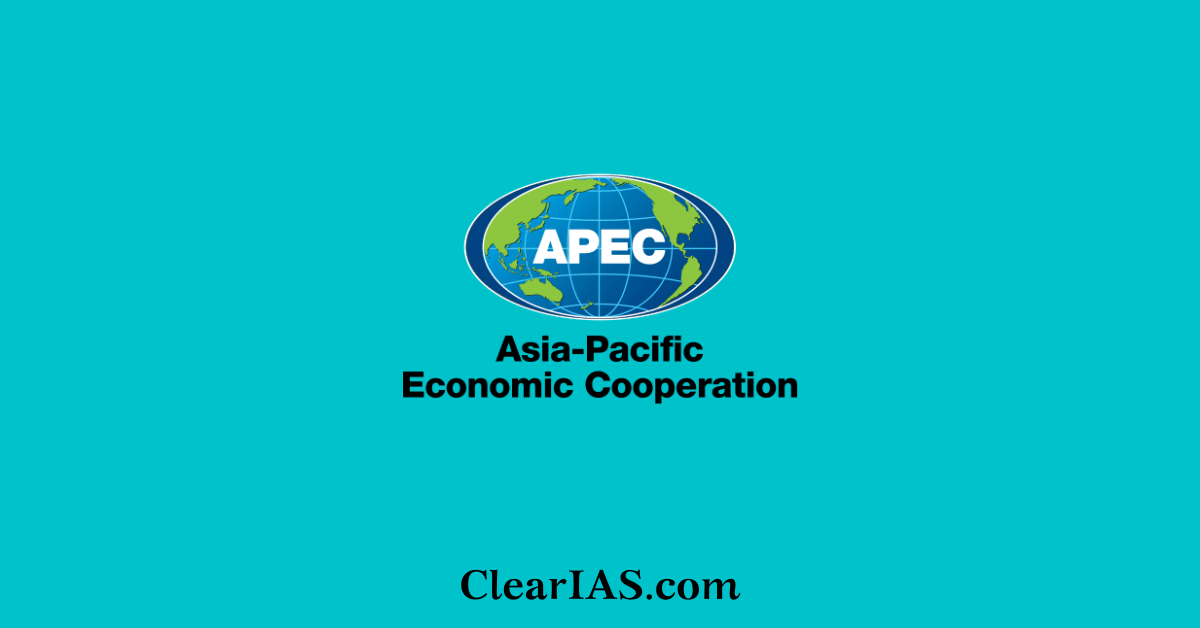 In order to facilitate the exchange of goods and services between economic actors, Many organisations are formed multilaterally and regionally. For the faster enhancement of trade in Asia-Pacific region, Asia-Pacific Economic Cooperation (APEC) is formed. Read more about APEC here.

The primary goal is to support sustainable economic growth and prosperity in the Asia-Pacific region.

The formation of APEC also encouraged checking the proliferation of regional economic blocs, such as the European Union (EU) and the now defunct, North American Free Trade Area (NAFTA).

What is Asia-Pacific Economic Cooperation (APEC)?

The Asia-Pacific Economic Cooperation (APEC) is a regional economic forum established in 1989 to leverage the growing interdependence of the Asia-Pacific.

APEC’s 21 members aim to create greater prosperity for the people of the region by promoting balanced, inclusive, sustainable, innovative and secure growth and by accelerating regional economic integration throughout the Asia-Pacific region.

These 21 member countries collectively account for nearly 50% of the world’s trade and about 57% of GDP.

India was invited to be an observer for the first time in November 2011. India is not in the grouping and has applied for membership.

Origin and Development of APEC:

The necessity of a permanent body to coordinate the economic relations among the market-oriented nations of the Pacific rim was voiced by the then Australian Prime Minister, Robert Hawke, in January 1989.

The meeting was attended by five Pacific industrial economies (Australia, Canada, Japan, New Zealand and the US), the then members of ASEAN (Indonesia, Malaysia, Thailand, Singapore, the Republic of Korea and Brunei) and South Korea.

However, as the concept of regional economic groupings gained ground throughout the world, it was decided to institutionalize the grouping. The 1991 Ministerial Meeting at Seoul, South Korea, adopted a declaration outlining the objectives and organizational structure of APEC and approved the membership of China, Hong Kong (Hong Kong at that time was still under lease to the UK) and Taiwan.

In 1994 during the Bogor, Indonesia summit, APEC set the Bogor Goals of “free and open trade and investment in the Asia-Pacific by 2010 for industrialized economies and 2020 for developing economies.”

APEC leaders adopted the Putrajaya Vision 2040, a new 20-year growth vision to replace the Bogor Goals named after the Indonesian town where leaders agreed in 1994 to free and open trade and investment.

Specifically, APEC aims to promote economic and technical cooperation among the members by stimulating the flow of goods, services, capital and technology; developing a liberalized trade and investment regime; to encourage private investment, and supporting ‘open regionalism’.

It also works on promoting and accelerating regional economic integration.

By enhancing human security, the organisation try to Facilitate a favourable and sustainable business environment.

The governing body of APEC is the Annual Ministerial Meeting of the foreign and trade ministers of all the member-states. The chairmanship of the meetings rotates every year among the members.

The Senior Officials Meetings, consisting of representatives of all the member-states, are held annually and are responsible for the implementation of policies framed by Ministerial Meetings.

The Secretariat is headed by the Executive Director who holds a term of one year. 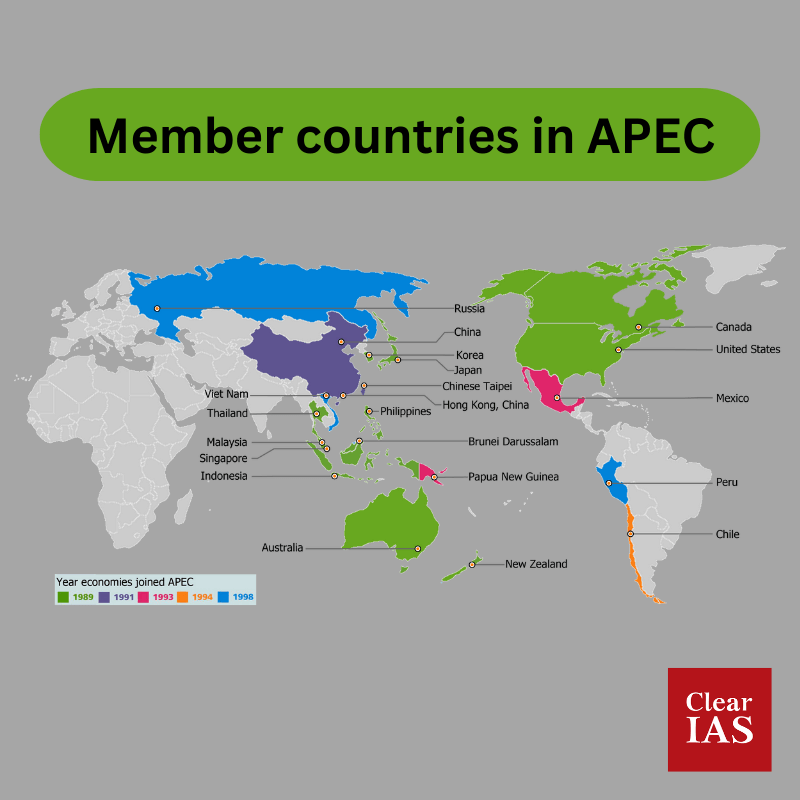 APEC works to help all residents of the Asia-Pacific participate in the growing economy.

The forum adapts to allow members to deal with important new challenges to the region’s economic well-being. This includes ensuring disaster resilience, planning for pandemics, and addressing terrorism.

1. Growth and Development of the Region

4. Initiatives for a cleaner environment

Why India has not got membership in APEC?