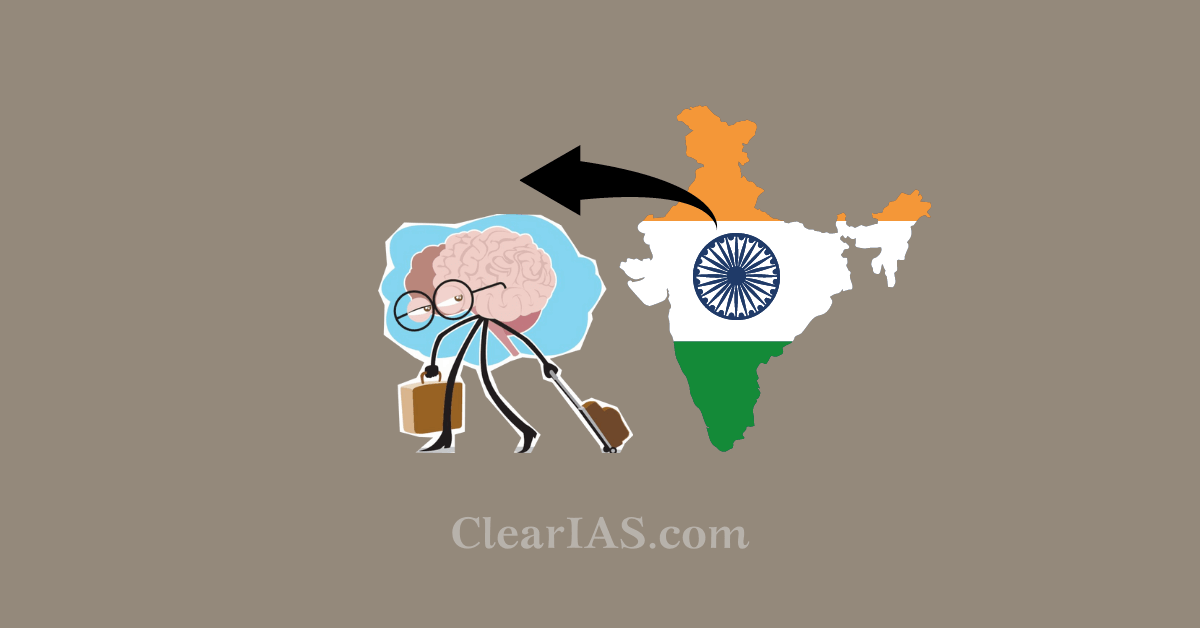 What is causing the brain drain or the great Indian migration? Why are talented Indians choosing foreign lands over India? Read to know more.

What is Brain drain?

The brain drain is the migration of educated persons from one country to another.

Secondary external brain drain occurs when human resources leave their country to go work elsewhere in the nearby region.

According to the recent information from the Ministry of Home Affairs (MHA), more than six lakh Indians renounced their citizenship in the past five years. In 2021, till September 30 around 1,11,287 Indians have given up their citizenships.

In the past two decades, there has been a continuous outflow of Indians, except during the 2008 financial crisis and in 2020-21 due to Covid-19 related travel bans.

India has become a major exporter of healthcare workers to developed nations particularly to the Gulf Cooperation Council (GCC) countries, Europe, and other English-speaking countries. As per OECD data, around 69,000 Indian-trained doctors worked in the UK, US, Canada, and Australia in 2017. In these four countries, 56,000 Indian-trained nurses were working in the same year. Hence, there is also large-scale migration of health workers from India.

Why are Indians emigrating?

Indian competence, linguistic prowess, and a higher level of education are a few of the attractions for countries, which have eased visa rules to attract talent. As the opportunities become scarcer here, the foreign countries are ever more aware of the multi-talented Indian engineers, doctors, and scientists with English language prowess as well.

The effect of brain drain on the Indian health sector:

The emigration of health workers from India to GCC and western countries has been taking place for decades. And this is part of the reason for the shortage of nurses and doctors.

There are strong pull factors associated with the migration of healthcare workers, in terms of higher pay and better opportunities in the destination countries.

But the push factors are what often drive these workers to migrate abroad.

Developed countries were in desperate need of retaining their healthcare workers, so they adopted migrant-friendly policies during the beginning of the pandemic.

The Indian government’s policies to check brain drain do not provide long-term solutions, rather they are restrictive.

The need of the hour is for increased investment in healthcare which has been evident throughout the pandemic. The 2020 Human Development Report shows that India has five hospital beds per 10,000 people which is one of the lowest in the world.

Increased investment in healthcare, especially in the public sector is essential as this would increase employment opportunities for health workers.

There are few positive outcomes of such emigrations too occasionally which can be summarised under Brain gain and Reverse brain drain theories.

India does not offer dual citizenship hence people seeking citizenship in other countries must give up their Indian passport. However, Indians who renounce citizenship can still apply for an Overseas Citizen of India (OCI) card, which gives them the benefit of residing and even running a business in India.

The Indian government has a simple online process for citizenship renouncing, making it clear that they are much worried about the outflow of the talented population.

A reason for this is maybe the fact that the expatriates have become huge financial assets for India through remittances and investments. NRI remittances have been a major contributor to India’s forex receipts though motivated by personal gains.

India needs systematic changes to build an overall environment that would be beneficial for the talented enough to motivate them to stay in the country.

The government should focus on framing policies that promote circular migration and return migration. Like policies that incentivize professionals to return home after the completion of their training or studies would be welcomed.

India could also hold talks to frame bilateral agreements for a policy of “brain-share” between the sending and receiving countries.