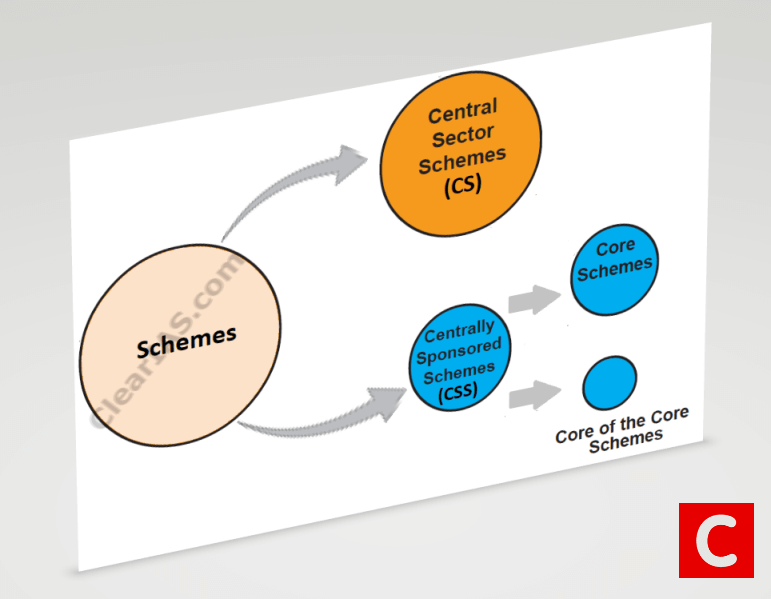 Centrally Sponsored Schemes (CSSs) are special purpose grants (or loans) extended by the Central Government to States to encourage and motivate State governments to plan and implement programmes that help attain national goals and objectives.

Examples of national goals and objectives include extending clean drinking water and sanitation to every habitation, eradicating polio and tuberculosis, making primary education universal for every female and male child, and so on.

Centrally Sponsored Schemes (CSS) are again divided into Core of the Core Schemes and Core Schemes.

How are Centrally Sponsored Schemes different from Central Sector Schemes?

CSS are extended by the Union Government to States under Article 282 of the Constitution. The mainly cover items listed in states list.

Centrally Sponsored Schemes (CSSs) now form a major part of the Central Assistance(CA) given by the centre to states to implement the state plans. For ease of understanding, CSS may now be treated synonymously to CA. There were other types of Central Assistance before 2015-16, but almost all of them are discontinued as states got higher revenue after the 14th Finance Commission recommendations (higher devolution of taxes to states).

In 2014, the UPA-2 government approved Planning Commission’s proposal to merge the 147 Centrally Sponsored Schemes (CSS) and bring it down to 66 across various sectors for effective implementation and monitoring of the 12th Five Year Plan. The merger proposal was in line with the recommendations of the Chaturvedi committee, which had suggested bringing down CSS to avoid overlap.

CSS, Flagship Schemes and ACA: CSSs are backed by Central government grant money. They have been implemented by State governments over at least ten Five Year Plans. Out of the Centrally sponsored schemes, Government gives priority to certain special schemes to achieve social objectives. These schemes are called Flagship schemes. Schemes covered under additional central assistance are known as ACA. Conceptually both CSS and Additional Central Assistance (ACA) Schemes have been passed by the Central Government to the State governments. The difference between the two has arisen because of the historical evolution and the way these are being budgeted and controlled and release of funds takes place. In case of CSS, the budgets are allocated under ministries concerned themselves and the entire process of release is also done by them.

Towards the end of the UPA-2 rule (after restructuring), there were 66 Centrally Sponsored Schemes. 17 schemes out of the 66 schemes were called Flagship schemes. Flagship schemes correspond to a few major schemes, with higher fund allocation and rigorously pursued by the Government to achieve its national objectives.

Please see below the list of 66 Centrally Sponsored Schemes (CSS) including the 17 flagship schemes.

NB: CSS with an asterisk symbol (*) are Flagship Schemes of Indian Government.

The list given above is again revised by the NDA government in light of the 14th Finance Commission recommendations (Reference: Union Budget 2015-16 and Union Budget 2016-17). The latest list of Centrally Sponsored Schemes is provided in our article about Core of the Core Schemes, Core Schemes, and Major Central Sector Schemes in Union Budget 2018. ClearIAS.com will provide detailed overview and analysis of the important individual schemes in the coming articles.

What is the significance of Article 282?

Article 282. Expenditure defrayable by the Union or a State out of its revenues: The Union or a State may make any grants for any public purpose, notwithstanding that the purpose is not one with respect to which Parliament or the Legislature of the State, as the case may be, may make laws.

How important is CSS for UPSC Exams?

CSS are an important area for Prelims and Mains. UPSC aspirants should keep in mind that there are still many schemes outside the scope of CSS like Central Sector Schemes. The government in coming months may announce new schemes as they did with RKSK. Aspirants are also advised to keep track of merging or renaming of schemes. For example, National Rural livelihood Mission was renamed as Aajivika. Also, National Rural Health Mission and National Urban Health Mission were merged together and renamed as National Health Mission. Any scheme can be handpicked to frame a question. See related questions the 2013 Mains question paper for reference: