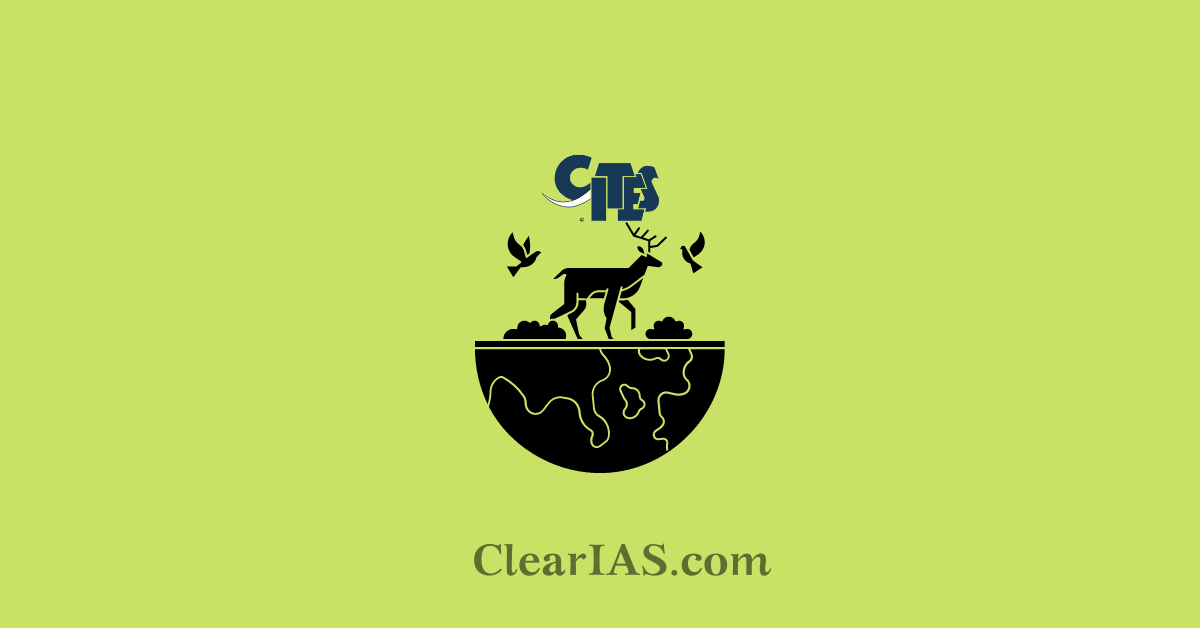 CITES (Convention on International Trade in Endangered Species of Wild Fauna and Flora, also known as the Washington Convention) is a multilateral treaty to protect endangered plants and animals from the threats of international trade. Read here to know more about the convention and its significance.

The 19th Conference of Parties (COP19) to the Convention on International Trade in Endangered Species (CITES) in Panama City has concluded draft decisions on reducing the risks of future zoonotic diseases.

The directives have been drawn against the backdrop of disease emergence associated with international wildlife trade. COVID-19, which became a pandemic, is a zoonotic disease that was transferred from animals to humans.

CITES (the Convention on International Trade in Endangered Species of Wild Fauna and Flora) is an international agreement between governments.

It aims to ensure that international trade in specimens of wild animals and plants does not threaten the survival of the species.

CITES was drafted as a result of a resolution adopted in 1963 at a meeting of members of IUCN (The World Conservation Union).

Parties of the Convention

CITES is an international agreement to which States and regional economic integration organizations adhere voluntarily.

States that have agreed to be bound by the Convention (‘joined’ CITES) are known as Parties.

Although CITES is legally binding on the Parties – in other words, they have to implement the Convention – it does not take the place of national laws.

Rather it provides a framework to be respected by each Party, which has to adopt its domestic legislation to ensure that CITES is implemented at the national level.

At the time when the ideas for CITES were first formed, in the 1960s, international discussion of the regulation of wildlife trade for conservation purposes was something relatively new.

Annually, international wildlife trade is estimated to be worth billions of dollars and to include hundreds of millions of plant and animal specimens.

Because the trade in wild animals and plants crosses borders between countries, the effort to regulate it requires international cooperation to safeguard certain species from over-exploitation.

CITES was conceived in the spirit of such cooperation. Today, it accords varying degrees of protection to more than 37,000 species of animals and plants, whether they are traded as live specimens, fur coats, or dried herbs.

The species covered by CITES are listed in three Appendices, according to the degree of protection they need:

Appendices I and II

Appendix I includes species threatened with extinction. Trade in specimens of these species is permitted only in exceptional circumstances.

Appendix II includes species not necessarily threatened with extinction, but in which trade must be controlled to avoid utilization incompatible with their survival.

This Appendix contains species protected in at least one country, which has asked other CITES Parties for assistance in controlling the trade. Changes to Appendix III follow a distinct procedure from changes to Appendices I and II, as each Party is entitled to make unilateral amendments to it.

Draft decisions on lowering the likelihood of zoonotic illnesses in the future have been completed at the 19th Conference of Parties (COP19) to the Convention on International Trade in Endangered Species (CITES).

In a step forward towards conservation, two Indian turtle species – the red-crowned roofed turtles (Batagur kachuga) and Leith’s soft-shell turtle (Nilssonia leithii) – have made it to Appendix I of the Convention on International Trade in Endangered Species (CITES).

CITES relaxed restrictions on the export of furniture and handicrafts made of North Indian rosewood or shisham (Dalbergia sissoo) from India on November 21, 2022.

India has decided not to vote against a proposal to re-open the international trade in ivory at the ongoing conference of the CITES.