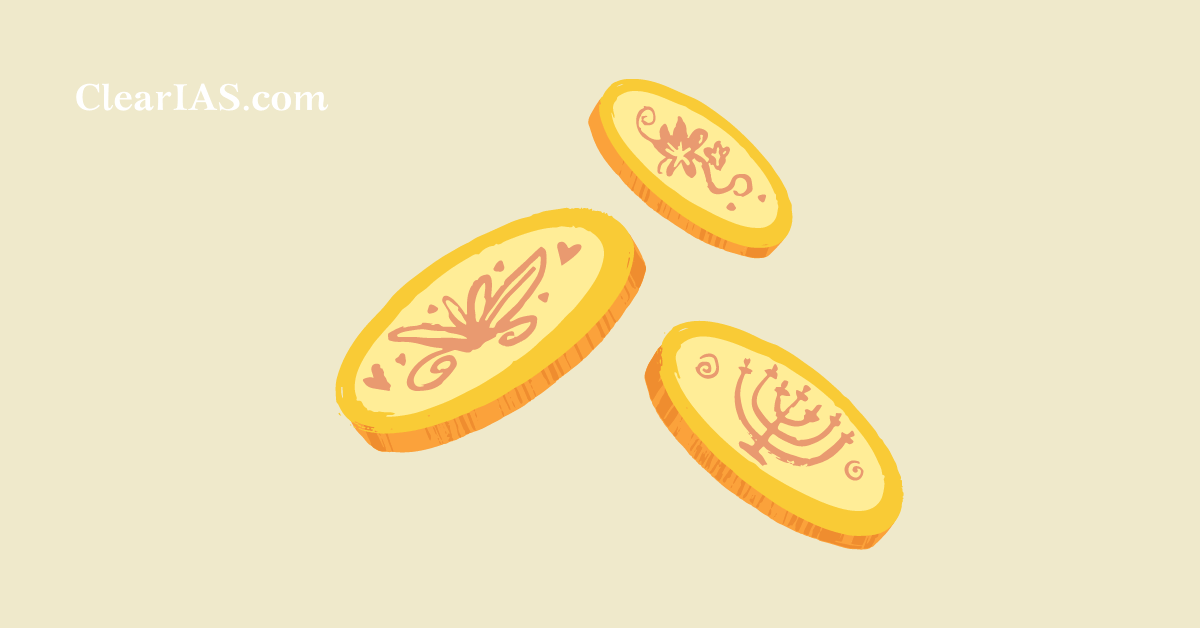 The study of coinage in history is called numismatics. This article is an attempt to capture the significant evolutionary changes the ancient Indian coinage experienced.

The beginning of ancient Indian coinage can be traced between 1st millennium BCE to 6th Century BCE. This stage comprised of coins that were made of copper and silver.

The coins found in ancient Indian history were mainly stamped bars of metal. The metal stamped bars were inspired by the currency that was in circulation during the Janpadas in the early historical phase and evolved further with the emergence of different dynasties.

In the Indian context, no significant evidence is found to conclude that people in Stone age used currency or they conducted exchange in barter.

The Indus Valley Civilization seems to have conducted an extensive trade on a wide network, but it was predominantly conducted around the barter system. However, the Harappans also used metals like silver of fixed weight for trade and mercantile activities.

Coins in the Vedic Period

The Rigveda has references to nishka (gold) and nishka greeva (ornaments of gold) but it is not sure if these could be understood as coins.

However, the later Vedic texts had references to nishka, suvarna, shatamana, and pada. But scholars are of the opinion that these terms do not indicate a wide circulation of conventional coins.

The most definite literary and archaeological evidence that suggests the usage of coins in the subcontinent, dates around 6th-5th Century BCE. It was in the context of the emergence of states, urbanisation, and rising trade activities that the Buddhist texts and Panini’s Ashtadhyayi refer to terms like kahapana/karshapana, nikkha/nishka, shatamana, pada, vimshatika, trinshatika, and suvanna/suvarna.

It is interesting to note the basic unit of the weight of the Indian coins was the red and black seed of gunja berry (Abrus precatorius).

In South India, the standard weight of the coins was ascertained by calculating the relationship between the weight of two kinds of beans- the manjadi (Odenthera pavonia) and Kalanju (Caesalpinia bonduc).

The most conventional system of coinage emerged with the circulation of punch-marked coins, that were mostly made of silver, and sometimes even copper. They were sometimes square, or round but mostly rectangular in shape.

The symbols on these were hammered using punches and dies. That is why we know them as punch-marked coins.

Punch marked coins are found across the subcontinent and were popular till the early centuries CE.

The Punch marked coin series can be further divided into four categories: The Taxila-Gandhara type, the Kosala type, the Avanti type, and the Magadhan type.

With the expansion of the Magadhan Empire, the coins that belonged to the Magadhan category replaced the other three types. It must be noted that these coins do not have any legends inscribed on them which could convey the details of the kingdom.

Coinage and the Mauryas

The Mauryan Empire used the punch-marked coins but with royal standard to make sure of their authenticity.

The liberty to use two different metals for coins was granted, and hence coins in silver and copper were very popular.

Coinage by the Indo-Greeks

The next prominent range of coins that were issued belongs to 2nd/1st century BCE by the Indo-Greeks. The Indo-Greeks system of coinage becomes significant because the minting was executed in a more refined manner.

The coins were mostly made of silver, usually round, with exceptions to few rectangular or circular) bore the name of the issuing ruler along with depicting legends.

For example, the coins of Menander and Strabo I show them passing through different stages of life, suggesting their long reigns.

The languages on these coins was Prakrit, inscribed mostly in Kharoshthi script.

The Kushanas (1st-4th Centuries CE) were the first dynasty in the subcontinent that issued a large number of gold coins. The lower denomination was usually found in copper coins.

The coins usually bore the figure, name, and title of the ruler on the obverse and the deities on the reverse. The legends are either entirely in Greek, or in some cases in Kharoshthi on the reverse.

Coinage by the Imperial Guptas

The obverse has the kings in various poses, mostly in martial mood, but sometimes even in artistic calibre.

The Gupta coins were issued in gold in large numbers and have been credited to their fine aesthetic appeal. However, the purity of gold saw a decline during the later Guptas.

The dynasties like the Gurjaras, Pratiharas, Chalukyas, Paramaras, and the Palas from circa 530 CE to 1202 CE can be put under a broad category of Indo-Sassanian styled coinage.

The main features of these coins included the bust of the ruling sovereign in a simplified geometric style on the obverse and a motif like a fire altar on the reverse.

Coinage by the Imperial Cholas

The coinage of the imperial Cholas bore semblance to the South Indian dynastic coins. The Chola coins exhibited a tiger crest. They also suggested political developments.

The emblems like fish and bow which belonged to the Pandyas and Cheras suggested a political conquest of these political powers, and also the idea of co-existence.

Comparison of Coin used in India

Table: A brief overview of the numismatic history of early India

Significance of numismatics in history

Coins are an important source of history, as they suggest important historical processes.  Not only the monetary situation, but broader questions related to economy and polity can be answered through numismatics.

The wide distribution of Kushana coins suggests trading activities, and the presence of ship motifs on Satvahana coinage reflects the importance of maritime trade. The inscribed figures of rulers, deities and legends give us an insight into social and political aspects of various kingdoms.

It must be noted that dates are seen very rarely on early Indian coins. Barring western Kshatrapa coins which give dates in the Shaka era and some Gupta silver coins which give the regnal years of kings, coins in early India are mostly devoid of dates. Dated or undated, coins found in archaeological excavations often help date the layers of time. An example is a site of Sonkh near Mathura, where the excavated levels were categorised into eight periods on the basis of coin finds.

With regard to the later development in coinage, the numismatic history of later ancient and the early medieval period saw a decline in trade and the feudal order marked stressed urban centres, and as a result, even though the circulation of coins did not stop, their purity and aesthetic quality saw degradation at many levels.

Questions related to the topic asked in the UPSC Civil Services Examination:

How do you justify the view that the level of excellence of the Gupta numismatic art is not at all noticeable in later times? (Mains 2017)