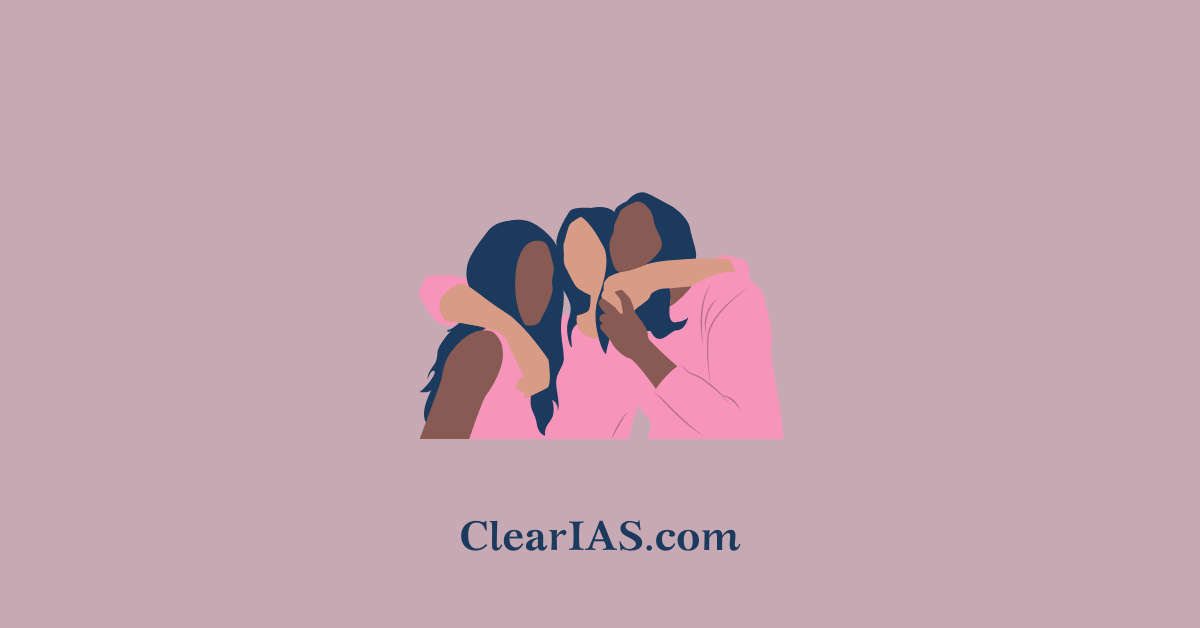 The government of India has taken several measures for the protection of women. There are several constitutional safeguards as well.

The Indian Constitution not only guarantees women’s equality but also gives the State the authority to take positive discriminatory measures in its favour in order to reduce the cumulative burden of socioeconomic, educational, and political disadvantages that women faced.

Fundamental Rights related to the Protection of Women

Article 14 confers on men and women equal rights and opportunities in the political, economic and social spheres.

Article 15 prohibits discrimination against any citizen on the grounds of religion, race, caste, sex etc.,

Article 16 provides for equality of opportunities in matters of public appointments for all citizens.

Article 39(a) further mentions that the State shall direct its policy towards securing to all citizens men and women, equally, the right to means of livelihood,

Article 42 directs the State to make provisions for ensuring just and humane conditions of work and maternity relief.

Legislative Measures for the Protection of Women

The crimes which are directed specifically against women are characterized as ‘Crimes Against Women’ These are broadly classified under two categories:

The crimes identified under the Indian Penal Code (IPC):

The crimes identified under the Special laws, such as :

Government Measures for the Protection of Women

The government has taken several measures for the protection of women:

The act provides for more effective protection of the rights of women guaranteed under the Constitution who are victims of violence of any kind occurring within the family and for matters connected therewith or incidental thereto.

National Commission for Women (NCW) is a statutory body set up by the Government of India. The commission is mandated to study and monitor all matters relating to the Constitutional and legal safeguards provided to women; review the existing legislations to suggest amendments wherever necessary, and look into complaints involving the deprivation of the rights of women. All the state governments also have to set up State Commissions for Women (SCW) with similar functions.

“Mission Shakti” is a programme in a mission mode that aims to improve interventions for women’s empowerment, safety, and security. The plan aims to economically empower women and provide them with the freedom to make their own decisions about their bodies and minds in a setting free from abuse and threat. Encouraging skill development, capacity building, financial literacy, access to microcredit, etc., it also aims to lessen the burden of care on women and enhance their involvement in the labour force.

The “Swadhar Greh Scheme” is being implemented by the Ministry of Women and Child Development. The programme meets the basic requirements of women in precarious situations, including those who have lost their homes due to family strife, crime, violence, mental stress, social isolation, or who are being coerced into prostitution and are in danger. The programme strives to economically and emotionally rehabilitate such women by offering them shelter, food, clothing, counselling, training, clinical assistance, and legal aid.

The One Stop Center (OSC) Scheme is also carried out by the Ministry of Women and Child Development. These OSCs offer a variety of integrated services, including police facilitation, medical assistance, legal assistance, counselling, psycho-social counselling, and temporary shelter, to women who have experienced violence or who are in need.

In order to ensure that no citizen is denied the opportunity to obtain justice due to economic or other disabilities, the Legal Services Authorities (LSA) Act, 1987 provides free and competent legal services to beneficiaries covered by Section 12 of the Act, including women and children. It also establishes Lok Adalats to ensure that the operation of the legal system promotes justice on the basis of equal opportunities.

In order to train the staff of One Stop Centers (OSCs) across the nation on how to handle psycho-social and mental health care needs to support women facing violence and women in distress, the Ministry of Women and Child Development has engaged with the National Institute of Mental Health and Neuro Sciences (NIMHANS), Bengaluru.

As a Centrally Sponsored Scheme for the Prevention of Trafficking and for the Rescue, Rehabilitation, Re-integration, and Repatriation of Victims of Trafficking for Commercial Sexual Exploitation, the Ujjawala Scheme is now being implemented.

Beti Bachao Beti Padhao initiative is being implemented through multi-sectoral intervention in all the districts of the country. This is a joint initiative of the Ministry of Women & Child Development, Ministry of Health & Family Welfare and Department of School Education & Literacy, Ministry of Education.

The objectives of this initiative are:

Women and girls are frequently the victims of violence and abuse on the streets, in transit, and in other public settings. Such incidents limit women’s freedom of movement and discourage them from moving freely and in the public locations of their choice.

As a result, the government established the Nirbhaya Fund, a special fund that can be used for initiatives aimed at enhancing women’s protection and security. It is a non-lapsable corpus fund that is managed by the Ministry of Finance’s Department of Economic Affairs.

A one-time assistance of Rs. 200 crores from the Nirbhaya Fund was given to States and Union Territories as a top-up grant to support their various Victim Compensation Schemes.

The below standard funding pattern will be followed: