As per news reports, the Prime Minister’s Office (PMO) is seeking a change in the way candidates are allocated services like IAS or IPS. The government is analyzing the possibility not only to change the way services like IAS or IPS are allocated, but also the way cadres are assigned. Many retired, serving, and aspiring civil servants are not happy with the new IAS/IPS allocation proposal.

Currently, allocation to services like IAS, IPS etc is based on marks secured by candidates in the Civil Services Exam conducted by Union Public Service Commission (UPSC).

If the new proposal is accepted, scoring high marks in the civil services examination conducted by the Union Public Service Commission will not be enough to get into IAS, IPS or IFS.

PMO has sought the feasibility of adding an additional component – the marks secured by the candidates in the compulsory three month ‘foundation course’ conducted by Department of Personnel & Training (DoPT).

What is the ‘Foundation Course’ all about?

Once a candidate clears UPSC CSE, he/she should undergo training by DoPT. The first part of the training is called the “Foundation Course” or FC. This is a 100-day training program.

F.C. is compulsory only for IAS, IFS, IFoS and IPS. It is optional for other services of Group A. Group B services are not made to attend it.

Long back when the number of selected candidates and services used to be less, all services used to attend Foundation Course (FC) at Lal Bahadur Shastri National Academy of Administration (LBSNAA). Now candidates selected by UPSC undergoes FC at different academies including LBSNAA.

The Foundation Course, a combination of activities carried out at the academy, consists of academic components such as public administration, law and political science, besides a number of extra-curricular activities such as trekking, village visits and interaction with fellow probationers.

At present, the Foundation Course counts for 400 marks, but, along with the other phases of the probation period, only goes towards establishing seniority within the batch.

DoPT writes to all cadre-controlling ministries 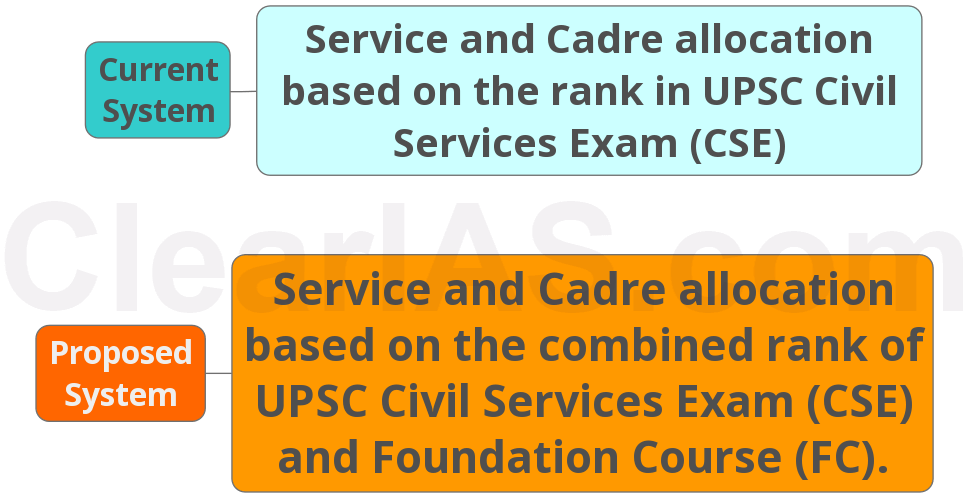 The Prime Minister’s Office wants that besides the marks scored in the UPSC Civil Services Exam, the probationers for IAS, IPS or IFS should be allocated service or cadre after reviewing their performance in the foundation course.

DoPT, under the ministry of personnel has written a letter to all cadre-controlling ministries seeking their opinion on the issue saying the PMO wants to change the rules from this year itself.

Items to be examined:

What’s is good about the new IAS/IPS Allocation Proposal? (if any)?

A lot of newly selected civil servants take the foundation course as just a formality because they know that they have been allocated cadre and services. When their marks and rank in UPSC and performance in foundation course will be at stake, they will take those three months seriously.

What is bad about the new IAS/IPS Allocation Proposal?

There are many problems with the new proposal. A few are listed below. The move has already caused outrage among retired, serving and aspiring civil servants. Many believe that the new move will do no good but destroy the existing system.

However, to implement the IAS/IPS allocation policy will not be easy.

First, there are many candidates who skip the Foundation Course every year, to attempt the UPSC Civil Services Exam again. If that is the case, how can the foundation marks be added to find the final ranks in a year is a big question.

Second, the rules of allocation based on UPSC CSE 2017 was already published. Induction to every service is as per laid down recruitment rules. The recruitment rules will have to be amended if this move is to be formalized. It might lead to many court case if government alter the same for this year. Not only this, UPSC has published the notification for Civil Services Exam 2018, and candidates are not pre-informed about any change in the final allocation process.

Minister of State for personnel Jitendra Singh said: “There was a suggestion to this effect which has been followed up by eliciting the views of all stakeholders. At present, the issue is still in the consultation stage. There is nothing more to it.”

The government is only exploring the option and has hence invited views and suggestions of the cadre-controlling ministries, to see if the option is feasible.

Nothing much should be read into it as of now.