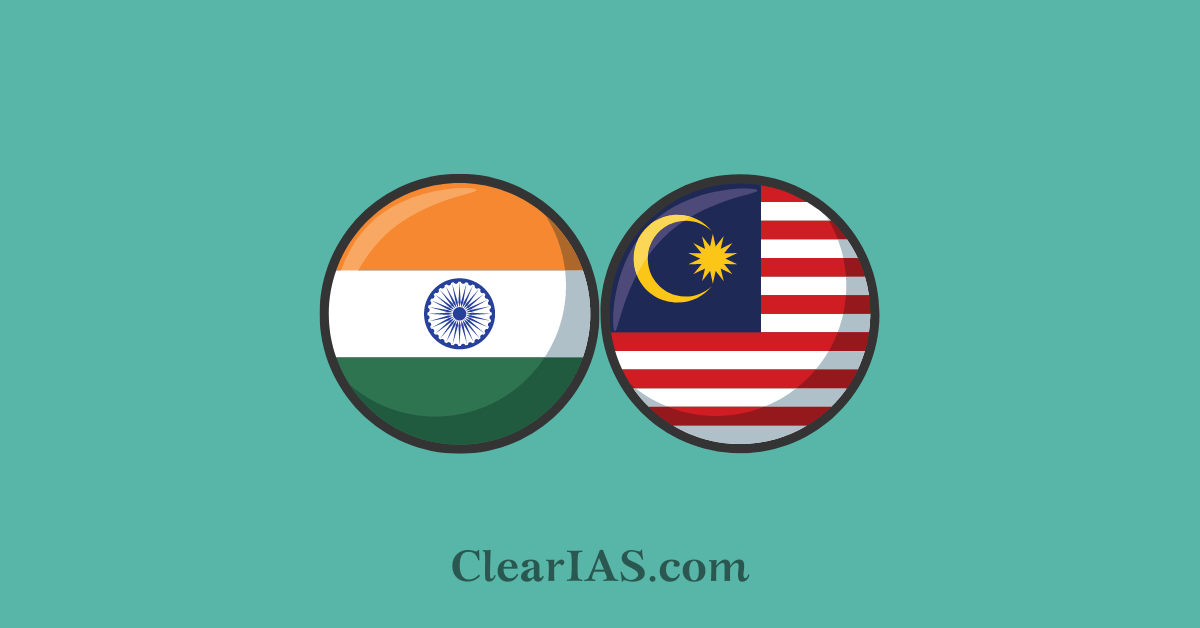 India-Malaysia has traditionally been close and friendly. Read here to know about the recent developments in bilateral relations.

India established diplomatic relations with the Federation of Malaya (predecessor state of Malaysia) in 1957.

India-Malaysia cooperation also has its regional and international dimensions. Both are the common member of various fora such as the NAM, the G-15, the G-77, the Commonwealth, the WTO, ASEAN Regional Forum (ARF), the East Asia Summit, and the Indian Ocean Rim-Association for Regional Cooperation (IORAC).

India-Malaysia defence relations have steadily grown over the years. An MOU on Defence Cooperation was signed in 1993.

With the coming into the force of the India-Malaysia Comprehensive Economic Cooperation Agreement (CECA) on 1 July 2011 the bilateral economic engagement has seen more growth.

Palm oil is the main export to India from Malaysia followed by mineral fuel and electronics goods. India’s main exports to Malaysia are transport machinery, food items like meat, non-basmati rice, and sugar.

Department of Promotion of Industry and Internal Trade (DPIIT) mentions the following:

As per the Ministry of Internal Trade and Industry (Malaysia); Indian investments in the country created 27042 jobs in Malaysia as of December 2018. The Indian companies have invested in 258 approved manufacturing projects in Malaysia.

The name of the ICCR’s Indian Culture Centre which is located in Kuala Lumpur is Netaji Subhash Chandra Bose which was established in 2010. Classes in Carnatic Vocal, Kathak dance, Yoga, Hindi language, and Tabla are undertaken by the faculties coming from both nations.

As a part of India’s Pravasi Bhartiya Divas (PBD), Malaysia sent the largest contingent of around 527. As of December 2020, there are six Pravasi Bharatiya Divas Awardees, hailing from Malaysia.

Indo-Malaysian cooperation is also growing in the area of science and technology. Both countries signed an agreement in 1998 on S&T cooperation in the specific areas of biotechnology, IT, advanced manufacturing systems, and advanced materials.

India-Malaysia signed an MoU on cooperation in the field of Traditional Medicine in October 2010.

The Government of Malaysia has been working to popularize AYUSH (Ayurveda, Yoga and Naturopathy, Unani, Siddha, and Homoeopathy) systems in Malaysia.

In 2020, Malaysian Prime Minister Mahathir Mohamad spoke in opposition to the revocation of Kashmir’s special status and the passing of the Citizenship Amendment Act.

India had then banned palm oil imports from Malaysia leading to a fall of 50 per cent (2019 – 1.1 million tonnes) from January to February 2020.

Later, the curb was lifted following the formation of a new government in Kuala Lumpur.

The historical ties of India and Malaysia lead to about 7% of Malaysia’s population being of Indian origin, which is significant for India’s foreign policy.