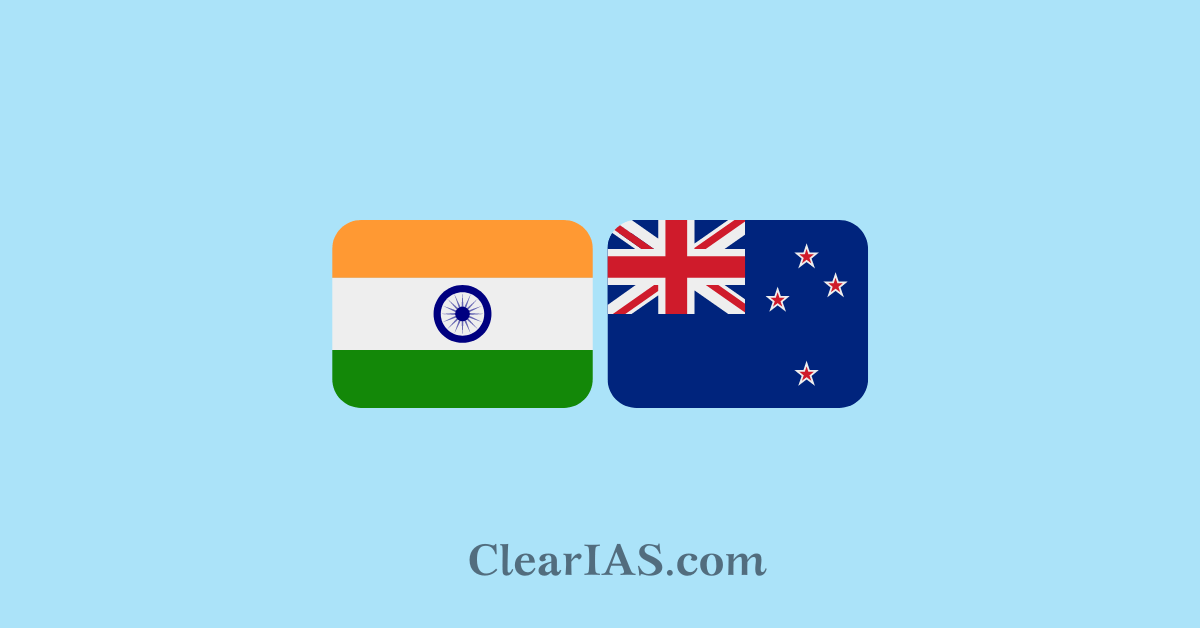 The relationship between India-New Zealand has experienced ups and downs, but there is a sense of stability. The emergence of globalization and growing interdependence have fueled this. Read here to more about bilateral relations.

India and New Zealand have cordial and friendly relations rooted in the linkages of the Commonwealth, parliamentary democracy, and the English language.

People-to-people contacts have been in focus since migration from India to this country began at the turn of the last century, and a sizeable population of Indian origin (estimated at 175,000) has made New Zealand a permanent home.

Tourism and sporting links, particularly in cricket, hockey, and mountaineering, have significantly fostered goodwill between the two countries.

Due to differences over agricultural subsidies, the countries’ discussions on a free trade deal, whether bilateral or through the East Asian Summit, have not succeeded since they established a Joint Trade Committee in 1983.

New Zealand has identified India as a priority country in its “Opening Doors to India” policy notified in 2011 which was reiterated in 2015.

On 27 November 2017, the first India-New Zealand Cyber Dialogue was held in New Delhi.

Both countries have an interest in the prosperity and stability of the Indo-Pacific region and actively participate in the East Asia Summit and the ASEAN Regional Forum.

India is a Post Forum Dialogue partner in the Pacific Islands Forum.

India-New Zeland also connects as members of several international organizations including the United Nations, the World Trade Organization, and the Commonwealth.

India is NZ’s 11th largest two-way trading partner with a total of two-way trade. Education and tourism are NZ’s growth sectors with India.

A free-trade agreement has been established between the two countries.

‘India-New Zealand 2025: Investing in the Relationship’ sets out a framework for New Zealand Government agencies and partners to grow the relationship with India over the next five years.

New Zealand does not support India’s membership in the Nuclear Supplier Group (NSG). It is yet to change its position of admitting only signatories of Nuclear Non-Proliferation Treaty (NPT) countries in NSG, a group of 48 countries that works by consensus.

The New Zealand India Research Institute is a consortium of scholars actively engaged in research on India in New Zealand universities.

Students from India can apply for Commonwealth Scholarships for postgraduate study in New Zealand.

In June 2011, the two countries set up an India-New Zealand Education Council.

Cooperation on the Covid-19 pandemic

Both countries cooperated extensively both bilaterally and as part of a group of like-minded countries in fighting against the pandemic by ensuring the continuity of supply chains of essential commodities, medicines, and vaccines.

While New Zealand cannot ignore India’s sizable market and its services industry, neither can India ignore New Zealand’s crucial role in the Asia-Pacific region or its growing influence in numerous international and regional fora.

Although there has been increasing convergence, there is still a need for mutual understanding, which can be fostered by increasing investments, commerce, and interpersonal interactions.

Although both nations participated in the East Asia Summit and addressed non-traditional security concerns, there is a need to address the divergent policy perceptions and cooperate to advance peace and increase trade on a regional level.