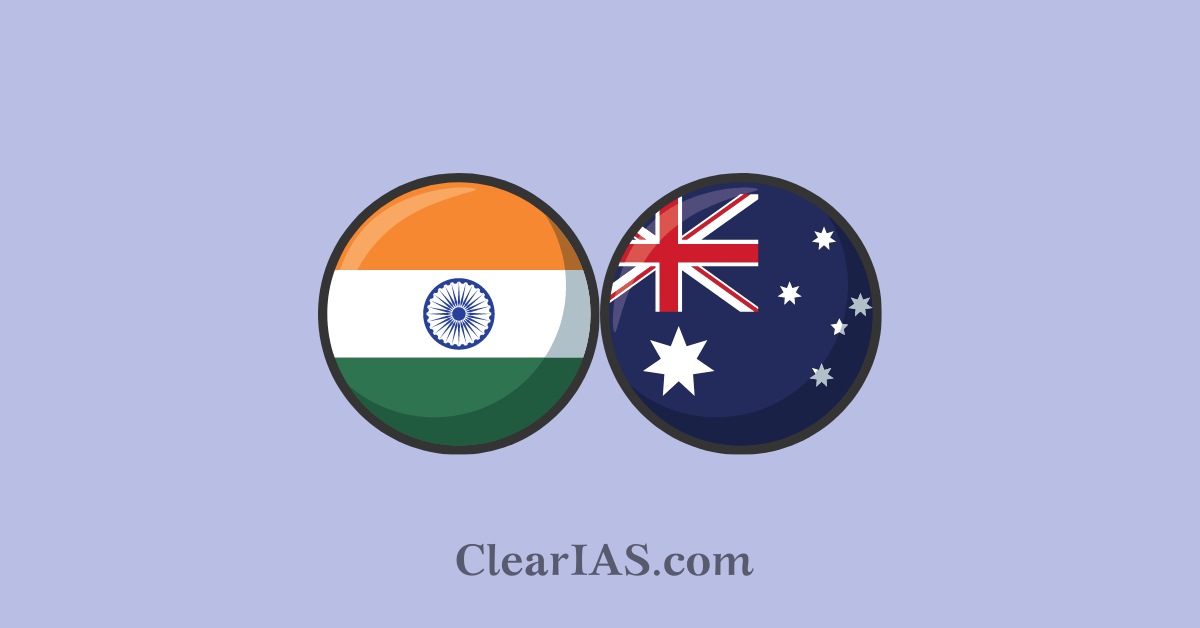 India-Australia has a very strategic partnership with each other in terms of trade, security, education, and so on. Read here to know more.

It is a Free Trade Agreement (FTA) that India has signed with a major developed country in over a decade.

The Agreement encompasses cooperation across the entire range of bilateral economic and commercial relations between the two countries and covers areas like:

India and Australia have several commonalities, which serve as a foundation for closer cooperation and multifaceted interaction, on lines similar to what India has developed with other Western countries.

Both are strong, vibrant, secular, and multicultural democracies. They both have a free press and an independent judicial system; the English language is an important link.

Cricket, and now the large numbers of Indian students coming to Australia for education, is a significant element in awareness at the popular level.

The relationship has grown in strength and importance since India’s economic reforms in the nineties and has made rapid strides in all areas of trade, energy, and mining, science & technology, information technology, education, and defence.

India and Australia have commercial ties dating back to the 18th century when India played a central role in nourishing the young colony.

Trade with Australia came to be an important element in the operations of the East India Company in Bengal.

For the next half-century, Australia’s most immediate and direct links were with India rather than London, as bureaucrats, merchants, chaplains, and judges moved between the two colonies.

India was an important source of food and provisions for Australia; by 1840 a ship was leaving Sydney for India roughly every four days, and merchants in Calcutta grew rich from supplying the new outpost.

At the beginning of the 19th century, several British colonial families from India made a life for themselves in the new Australian colonies.

Australia and India established diplomatic relations in the pre-Independence period when the Consulate General of India was first opened as a Trade Office in Sydney in 1941.

While there has been a regular exchange of visits at the Ministerial level, bilateral visits at the Head of Government/Head of State level have been limited.

There are frequent exchanges of visits including at the level of Service Chiefs, regular Naval, Air Force, and Army Talks; joint naval exercises; regular exchanges at each other’s training institutes and seminars.

India’s ranking among Australia’s export destinations has risen from twelfth to fourth in the period 2003-04 to 2009-10.

India’s main service exports to Australia are computer and information services and tourism.

The main Australian service exports to India are education, education-related travel, and tourism.

Four products – coal, non-monetary gold, copper ores & concentrates, and petroleum – accounted for over 80 percent of India’s imports from Australia, with coal and gold being the dominant imports in 2010-11.

India’s major exports to Australia in 2010-11 were pearls and gems, jewelry, medicaments, and passenger motor vehicles.

The India-Australia Joint Ministerial Commission was established in 1989 and has held thirteen meetings to date, the last one in Canberra on 12 May 2011.

After the JMC, the two sides agreed to commence negotiations for a Comprehensive Economic Cooperation Agreement (CECA), which has now begun.

The signing of five Action Plans in 2008, in the areas of coal, mining, power, petroleum & natural gas and new & renewable energy is significant, underlining the importance of the natural resources sector in the bilateral engagement.

All the major Indian IT companies have a presence in Australia and are rapidly growing. These include Infosys; Satyam Mahindra; TCS; HCL; Polaris Software Lab Ltd; Birlasoft; NIIT; ICICI Infotech; Wipro; Mahindra-British Telecom Ltd; i-Flex; gate; among others. Satyam Mahindra has the largest product development center outside India in Melbourne.

An Inter-Governmental Agreement on S&T was concluded in 1986, under which MOUs have been entered into in the areas of space, meteorology, S&T research, and educational and scientific training. There are Joint Working Groups on S&T and Biotechnology.

In 2006, the two Governments set up the Australia-India Strategic Research Fund. It covers several areas including agriculture, astronomy and astrophysics, environmental sciences, microelectronics, and nanotechnology, and has identified several collaborative research projects.

However, following the tightening of student visa regulations, changes in the general skilled migration rules, the negative impact of the string of student attacks in 2009-10, and the rising cost of the Australian Dollar, the number of student enrolments from India declined significantly.

There is a rapidly growing Indian community of nearly in Australia. In addition, there are a sizeable number of people of Indian origin from countries such as Fiji, Malaysia, Kenya, and South Africa.

Indian missions and posts in Australia

Besides the High Commission in Canberra, India has Consulates in Sydney, Melbourne & Perth, and an Honorary Consul in Brisbane.

Government of India offices and PSUs in Australia include the Tourist Office; State Bank of India branch; New India Assurance Co Ltd (in Australia since 1955); and Air India (offline station). Bank of Baroda, Union Bank of India, and Punjab National Bank have their representative offices in Sydney.

The cooperation and coordination between the two countries have seen exponential momentum in recent years. The shared values, interests, geography, and objectives are the foundation of deepening India-Australia relations.

Both India and Australia share a vision of a free, open, inclusive, and rules-based Indo-Pacific region.

India and Australia believe in cooperative use of the seas by following international law including the United Nations Convention on the Law of the Sea (UNCLOS) and peaceful resolution of disputes rather than through unilateral or coercive actions.

The India-Australia ECTA will enhance the already close and strategic relations between the two countries.

It will also significantly increase bilateral trade in goods and services, create new employment opportunities, raise living standards, and improve the general welfare of the people of the two countries.