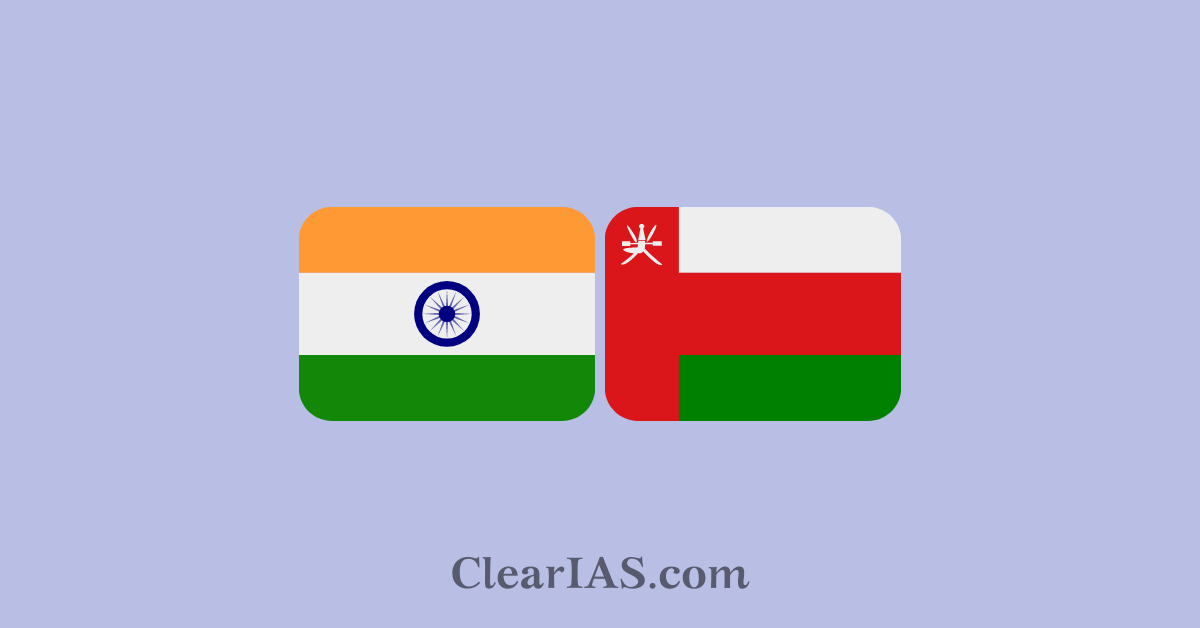 India-Oman has had historic maritime and cultural relations for 5000 years. Read here to know more about the bilateral ties.

India-Oman agrees upon a program of scientific and technological cooperation: India and Oman will work together in certain areas like sustainability scientific harnessing of resources under a Programme of Cooperation (POC) in the fields of Science and Technology were signed between them.

The areas of cooperation identified based on the POC for the period 2022 – 2025 are:

Under the agreement, both countries will support joint scientific projects based on mutual interest, developed jointly by the Indian and Omani institutions.

They will encourage the exchange of scientists, researchers, experts, and specialists for the implementation of selected joint projects aimed at developing applicable technology.

This will lead to the dissemination of research results and establishing contacts with the industry for the follow-up of research and development work.

The countries will also hold at least one workshop each year alternatively in India and Oman during the 2022 – 2025 periods in mutually acceptable areas.

The Sultanate of Oman is a strategic partner of India and an important interlocutor at the Gulf Cooperation Council (GCC), Arab League, and Indian Ocean Rim Association (IORA) fora.

India and Oman are linked by geography, history, and culture and enjoy cordial relations.

While people-to-people contact between India and Oman can be traced back 5000 years, diplomatic relations were established in 1955 and the relationship was upgraded to a Strategic partnership in 2008.

India-Oman has had visits at the highest level and Ministerial level visits have been exchanged frequently.

India-Oman Defence cooperation has emerged as a key pillar of the strategic partnership between the two countries. There has been a regular exchange of visits by Defence Ministers of both sides.

The Ministries of Defence of both countries review their relations annually under the aegis of Joint Military Cooperation Committee meetings. Both Air Force and Navy undertake staff talks regularly which has been the catalyst for new areas of cooperation.

In addition, other than the Defence Subject Matter Expert Exchange that regularly takes place Indian Navy has been deploying mobile training teams in Oman on an annual basis for training of RNO personnel.

Since 2008, Oman has been extending its support to the Indian Navy’s anti-piracy missions and Indian Naval Ships are regularly welcomed by Oman for Over Seas Deployments.

Key bilateral agreements/MoUs between India and Oman cover cooperation in:

The bilateral trade and investment between India and Oman remain robust and buoyant.

Oman hosts a huge population of Indian expatriate communities, which keeps the cultural relations strong between the countries.

Outstanding contributions of Indians and People of Indian Origin in Oman to the strengthening of our bilateral relations have been recognized by the Government of India through Pravasi Bharatiya Samman Awards.

An MoU for cultural cooperation was signed between the two countries in 2010.

National Archives of India and the National Records and Archive Authority of Oman (NRAA) actively cooperate under the MoU.

First-ever Festival of India in Oman was organized by the Embassy of India, with the support of the Ministry of Culture, India, during November 2016-March 2017.

During the COVID19 period, both countries worked in close coordination to facilitate the repatriation of respective nationals.

Air bubble agreement was signed and became operational between both the countries w.e.f. 01 October 2020.

India also facilitated the return of Indian medical professionals to Oman and emerged as a reliable supplier of food and other commodities to Oman during the COVID19 period.

Oman lies at the Strait of Hormuz which is strategic for India as it imports 1/5th of its oil imports through it.

The access Oman has to the gulf region is crucial for defence cooperation between India-Oman. The framework MoU for defence exchanges between the two countries was renewed in 2021.

India conducts military exercises of all three services with Oman- which is the only such relation in the gulf region.

India has been given access to Port Duqm in Oman for military and logistic use which is a strategic success for India’s maritime security.

India-Oman relations have been important and have lots of potential for future endeavors as well.

Relations with Oman are crucial for India on fronts like maritime security and energy security.

The Duqm port is a huge opportunity for India to strengthen its maritime security against Chinese incursions in the Indian Ocean region.

India can also enhance the energy partnership with Oman in the wake of rising energy demands in the country. Oman is one of the front runners in clean energy initiatives in GCC countries, which can be utilized by India to boost its National Hydrogen Mission as well.