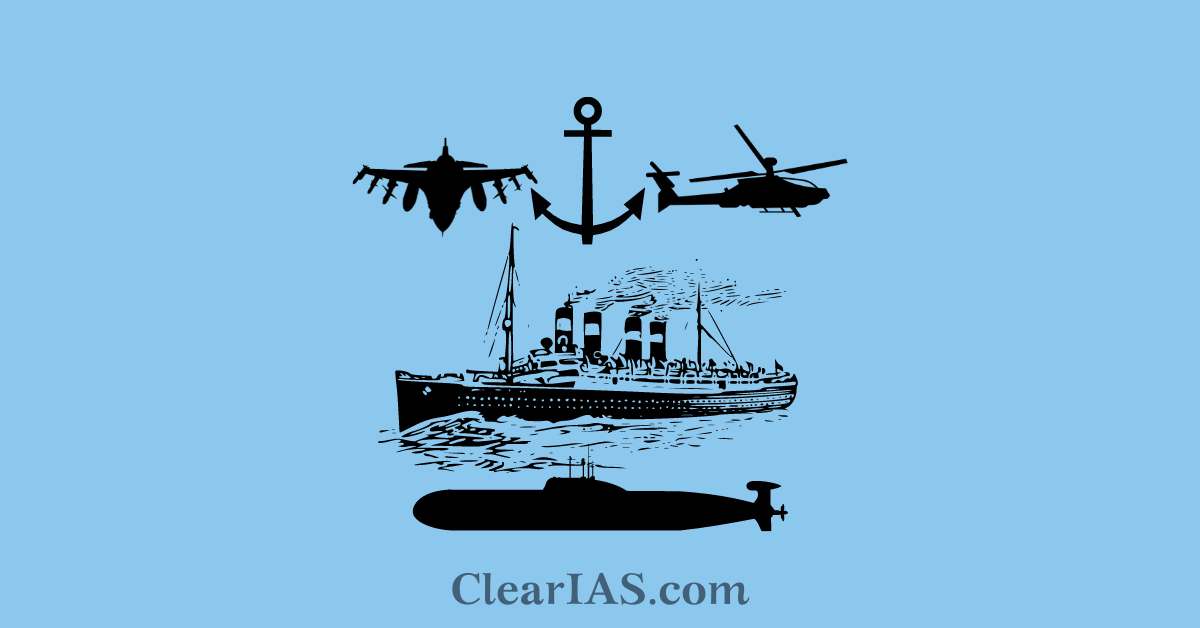 Indian Navy is the naval wing of the Indian Armed Forces. It is a blue-water navy that operates in the Persian Gulf region, the Horn of Africa to the Strait of Malacca.

The primary objective of the Indian Navy is to safeguard the country’s maritime borders. It also works with other branches of the armed forces, the Indian Air Force, and the Indian Army, to deter any aggression or threat to the territory, maritime interests of India, both in times of war and peace.

The navy conducts routine anti-piracy operations with other navies in the region of operation. It conducts 2-3 month-long deployments in the South and the East China Sea and the Western Mediterranean sea as well.

Indian Navy’s motto is “Sham no Varunah”, which means “may the god of water, Varuna is protecting us”.

The Indian Navy Day is celebrated on December 4 every year to remember Operation Trident.

Operation Trident was a counter-attack by the Indian Navy on the Karachi harbour during the Indo-Pakistan war in 1971. India used anti-ship missiles for the first time during this operation to destroy the Pakistani destroyer ship PNS Khaibar. Three more warships of The Indian Navy’s, INS Nipat, INS Nirghat, and INS Veer, played an important role in the attack.

The maritime history of India goes back to about 6000 years. The art of navigation has been recorded since the Indus Valley Civilisation. Then on the Indians have leaped ahead continuously in maritime trade and expansions. Since ancient times India’s trade relations with countries of the Pacific and Indian oceans have been recorded. From the Kalinga empire in 5-10 CE to the Chola empire in 984-1042 CE, naval expeditions have reached far and beyond to Malaya and Sumatran islands as well.

During 14th and 15th centuries, Indian shipbuilding skills and their maritime ability were so sophisticated that it could produce ships with a capacity to carry over a hundred men along with large quantities of goods for trade.

The advent of Europeans in India started sowing seeds of the decline of the Indian naval power. Even though there were few instances of strong naval forces throughout history, like with the Mughals, Gujarat kingdom, and the Marathas.

The formation of the Royal Indian Navy can be traced back to 1612, when the British and Portuguese engaged in a naval encounter, hence forcing the British to regularly maintain a naval fleet on the west coast of India.

In 1834, the navy which was earlier named the Bombay Marine became the Her Majesty’s Indian Navy. The navy participated in the First Opium war of 1840 and the second Anglo-Burmese war in 1852.

It was called Her Majesty’s Indian Marine in 1877. Later, in 1892 the Marine has rechristened the Royal Indian Marine which participated in World War I.

In 1934, the Marine was upgraded to a full naval force, thus becoming the Royal Indian Navy (RIN), and was presented the King’s colours in recognition of its services to the British Crown.

The RIN participated in World War II with a small fleet but suffered causalities too. The RIN was dominated by British officers, and no Indian held a high rank, even after World War II.

This situation along with racial discrimination and poor communications led to the Royal Indian Navy mutiny in 1946. But the revolt failed as it did not receive support from the Indian Army the leaders of congress or the Muslim League.

Over the years, the Indian Navy has executed several operations and relief operations in various parts of the world.

From the 21st century onwards, the Indian Navy has been a crucial role in maintaining peace on the maritime front. It has been deployed for humanitarian relief in times of natural disasters and crises across the globe, as well as to keep India’s maritime trade routes free and open.

Recent news about the Indian Navy

The Project 15B class of guided-missile destroyers, an improved variant of the Kolkata-class destroyers, are being built by Mazagon Dock Limited (MDL) for the Indian Navy.

The four ships in the project are:

Features of the ships

It is one of the Indian Navy’s paramount responsibilities to safeguard the large coastline of 7516 Kms and almost 1100 offshore islands with 2.01 million sq km EEZ (exclusive economic zone). The current geopolitical scenario has only intensified the need for more vigilance.

Destroyers like the P-15B class will play an important role in the oceans of the Indo-Pacific, making the Indian Navy a powerful force.

The guided-missile Destroyers are deployed for various responsibilities like escort duties with the Carrier Battle Group to protect the Naval fleet against any air, surface, and underwater threats.

Other projects of the Indian Navy

Project 75 (P75) involves the acquisition of six ships of the Kalvari-class diesel-electric attack submarines. The submarines have been ordered by the Indian Ministry of Defence (MoD) for the Indian Navy.

The new submarines are being built by Mazagon Dock Shipbuilders (formerly known as Mazagon Dock) in Mumbai, India, using the technology and training provided by the Naval Group.

The six scorpene class submarines under P75 are:

The Indian Navy intends to use the submarines for missions including area surveillance, intelligence gathering, anti-submarine warfare, anti-surface warfare, and minelaying operations.

This project envisages the indigenous construction of submarines equipped with a state-of-the-art air-independent propulsion system.

Under this project, the Indian Navy intends to acquire six conventional, diesel-electric attack submarines, which will have advanced features like–

Project 75 (I), is part of the Indian Navy’s 30 year Plan for indigenous submarine construction.

All six submarines are expected to be constructed in India, under the Make in India initiative.

The 30-year submarine-building plan was approved by the Cabinet Committee on Security, in June 1999, which included the construction of 24 conventional submarines indigenously by 2030.

A total of 24 submarines are to be built in India, and 6 of them will be nuclear-powered.

India has one nuclear submarine only at this point- INS Arihant. The INS Arighat, also a nuclear-powered ballistic missile submarine, is to be commissioned soon.

INS Chakra, a nuclear submarine, was taken on lease from Russia and is being returned. 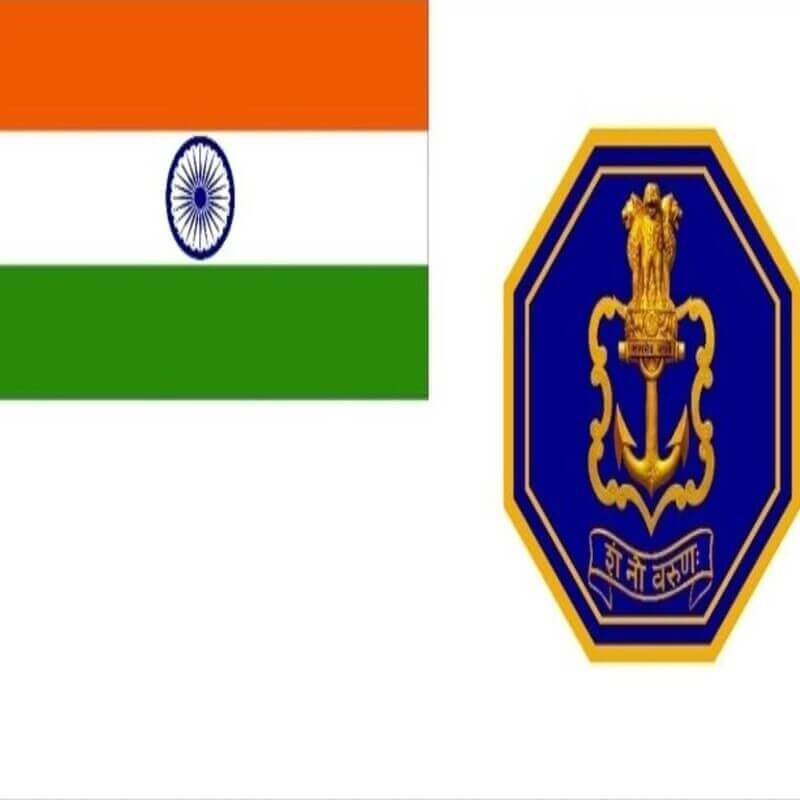 The Prime Minister introduced the new Naval Ensign “Nishaan” during the commissioning of the indigenous aircraft carrier INS Vikrant.

The Indian Naval Ensign was redesigned to shed the colonial past and honor the rich Indian maritime tradition.

The previous ensign carried the Saint George’s Cross with the Tricolour in the canton (top left corner of the flag).

The St. George’s Cross, which has a red cross on a white backdrop, serves as the previous Indian Naval Ensign. When India gained independence, the Union Jack was replaced with the Indian flag in the corner of the cross. The famous Maratha Emperor Chhatrapati Shivaji Maharaj was the inspiration for the new naval ensign.