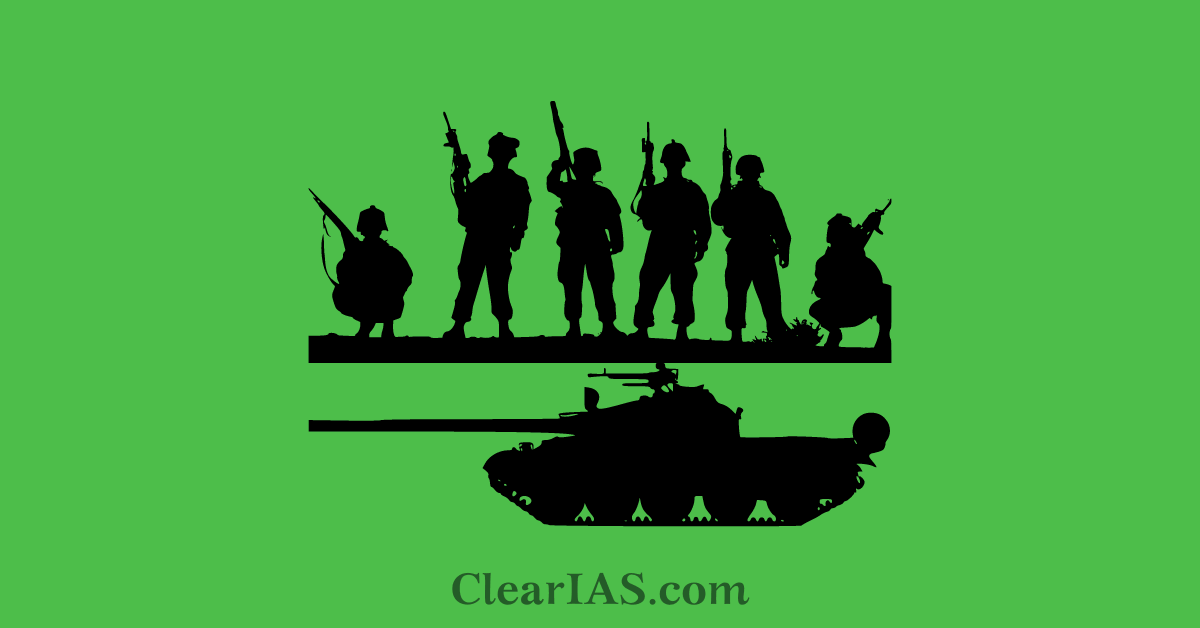 The Indian Army is the largest standing army in the world. Read to know more about the history, structure, and organization of the Indian Army.

Indian army is the land-based branch of Indian defence forces. It is the largest of the three armed forces of India (army, air force, and navy).

The primary mission of the Indian army is to defend the nation from external aggression as well as internal threats. It ensures national security and maintains peace within the borders.

The President of India is the Supreme Commander of the Indian Army. The professional head is Chief of Army Staff, a four-star general. Two officers have been conferred with the five-star rank of Field Marshal to date.

The motto of the Indian Army is “Service before Self”.

The army day is celebrated on January 15th every year commemorating the taking over of the position of Commander in chief of the Indian army by field Marshal Kodandera M. Cariappa from General Francis Roy Bucher in 1949. 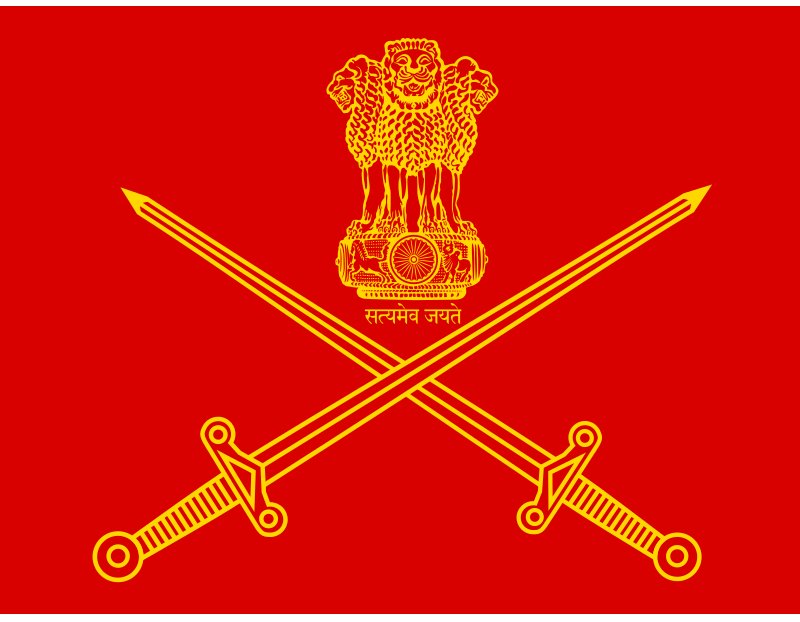 After independence, the Ministry of Defence was created under the charge of a Cabinet Minister, and each Service was placed under its own Commander-in-Chief.

1962: The Department of Defence Production was set up to deal with research, development, and production of defence equipment.

1980: The Department of Defence Research and Development was created.

History of the Indian Army

The Indian Army was a British commanded force until independence.  It comprised of locally recruited forces and expatriate British officers.

The British Indian army has fought in numerous wars like the Anglo Burmese; the Anglo-Sikh wars; the Anglo-Afghan wars; the Opium Wars, and the Boxer Rebellion in China; and in Abyssinia, hence helping maintain British supremacy.

1776: Military department was created within the East India company at Kolkatta.

1895: The Bengal, Bombay, and Madras Presidency Armies were merged into a single force called the Indian army. It was divided into four commands- Punjab (Northwest Frontier), Bengal, Madras (with Burma), and Bombay (with Sindh, Quetta, and Aden).

1912: The Prince of Wales Royal Indian Military Colege was established at Dehradun to provide education to the wards of aristocratic and well-to-do Indian families and to prepare selected Indian boys for admission into the Royal Military College, Sandhurst. Cadets were given a King’s commission, after passing out, and were posted to one of the eight units selected for Indianisation.

1914-18: World war I saw 1.3 million Indian soldiers participate, out of which 74,187 were killed or missing in action. They contributed to European, Mediterranean, middle eastern, and African war theatres.

1939-45: During World War II, the Indian soldiers fought with the Allies. Indian had been pulled into war without the consent of the Indian. This has led to demands of complete independence in return.

Many Indian soldiers deflected during the course of war to support the independence movement from outside. This led to many joining the Free India legion in Germany. The Indian POWs joined the Indian National Army in Singapore which was led by Subhash Chandra Bose.

After the independence and partition in 1947, four of the ten Gurkha regiments were transferred to the British Army. The rest of the British Indian army was divided between the newly created nations of India and Pakistan.

1947: Indo Pak war of 1947 or the First Kashmir War saw the Indian army playing a crucial role. An intense war was waged across the state borders. Pakistan suffered significant losses and was stopped on the line formed which is now called the Line of Control (LOC).

1948: After partition, the Nizam of Hyderabad chose to remain independent and maybe join Pakistan later on. The Indian Army troops were ordered by then Deputy Prime Minister Saradar Vllabhai Patel to secure Hyderabad state after the talks between Nizam and the government of India reached a stalemate. The Indian army was backed by the Indian air force.

1961: The Army participated in Operation Vijay launched to secure Goa as well as Daman and Diu from the Portuguese.

1962: The Sino- Indian war broke out in the Aksai Chin region (now under Chinese control) and Arunachal Pradesh. The Chinese and Indian troops made incursions beyond the disputed McMahon Line increasing the tensions. But India lost footing in the war because of poor coordination among various divisions of the Indian Army, and the late decision to mobilize the Indian Air Force gave China a crucial tactical and strategic advantage over India. The Line of Actual Control (LAC) came into being after this.

The LAC is generally divided into three sectors:

1967: The Cho La incident or the Sino-Indian skirmish was a military conflict between the Indian arly and the Chinese People’s liberation army in Sikkim. Indian army convincingly ousted the PLA from Sikkim.

1971: The president’s rule of 1971 saw the launch of counter-insurgency Operation Steeplechase by the Indian army and police against Naxalites in the Red corridor.

The Bangladesh liberation war of 1971 had heavy involvement of the Indian Armed forces. The Indian army battalions were engaged in clashed in both the eastern and western front, with air support from the Indian Air force. Many famous battles like the Battle of Longewala were fought.

1984: Indian army participated in Operation Meghdoot to secure the Siachen glacier from Pakistani incursions.  An entire battalion of the Kumaon Regiment was airlifted to the glacier. The Indian Army continues to control all of the Siachen Glacier and its tributary glaciers, which is one of the harshest and inhospitable conditions for the troops to be posted in.

Indian army has played important roles in many counter-insurgency operations over the years, such as Operation Blue star and Woodrose against Sikh insurgents in the 1980s, operation golden bird in 1995 in the northeast.

1999: The Pakistani army had captured major vantage points in Kashmir. Once the scale of the Pakistani incursion was realized, the Indian Army quickly mobilized about 200,000 troops, and Op Vijay was launched. However, since the heights were under Pakistani control, India was at a clear strategic disadvantage. But by the end of the Kargil war, all the enemy-occupied areas were back in Indian army control. This war gave rise to many valiant and gallant stories of bravery and sacrifice by the Indian army.

2016: Indian Army carried out surgical strikes in PoK in the terrorist launch pads in response to the terrorist attack on Indian army soldiers in Uri. The final ceasefire was reached in 2018 between both countries.

2017: Doklam crisis was a border stand-off between the Indian Army and Chinese PLA over Chinese construction of a road in doklam, a trijunction between India, China, and Bhutan. Indian army has launched op juniper to stop the Chinese.

Major exercises of the Indian Army:

Op. Brasstacks (1986): It was launched by the Indian Army to simulate a full-scale war on India’s western border. The exercise was the largest ever conducted in India. It included nine infantry, three mechanized, three armoured divisions, and one air assault division, as well as three independent armoured brigades.

Ex. Nomadic Elephant: The army has been conducting training exercises with the Mongolian army since 2004.

Ex. Yudh Abhyas: The Yudh Abhyas exercise is an ongoing series, since 2005. It is a joint exercise between the Indian and United States armies, agreed upon under the New Framework of the India-US Defence Relationship.

Ex. Shakti: The Shakti exercise is an ongoing series, since 2011, of joint exercises between the Indian and French armies. The exercise is conducted to practice and validate anti-terrorist operations in snowbound and mountainous areas.

Structure of the Indian Army: 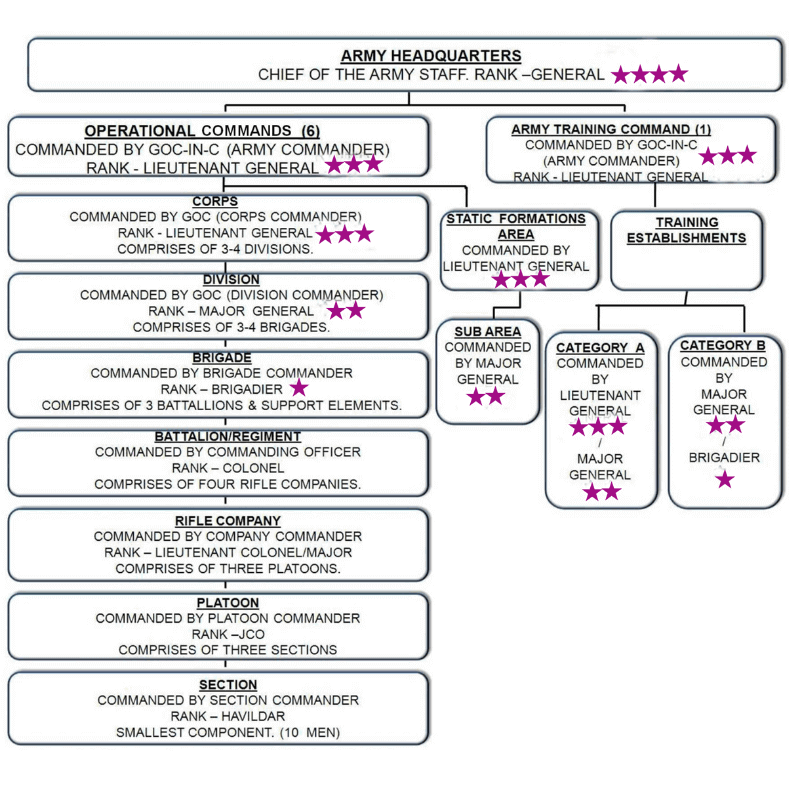 The Indian Army is operationally and geographically divided into seven commands, with the basic field formation being a division. Below the division level are permanent regiments that are responsible for their own recruiting and training.

Future of the army:

The theme of the year 2022 is “In stride with the Future”, which signifies the army’s commitment to empowering the force through re-structuring and induction of modern weapon systems for future conflicts.

Emerging technologies, such as Artificial Intelligence, Cyber Warfare, Robotics, and Aerospace, which have the potential for Military application and a disruptive impact on modern-day warfare are being explored and inducted.

To confront multifarious security challenges, the Indian Army is “In Stride with the Future”, fully committed towards modernization with an impetus to indigenous solutions.

F-INSAS (Future Infantry Soldier As a System) is the Indian Army’s principal infantry modernization program, which aims to modernize the army’s 465 infantry and paramilitary battalions by 2020.

There are many weapons programs going on such as: