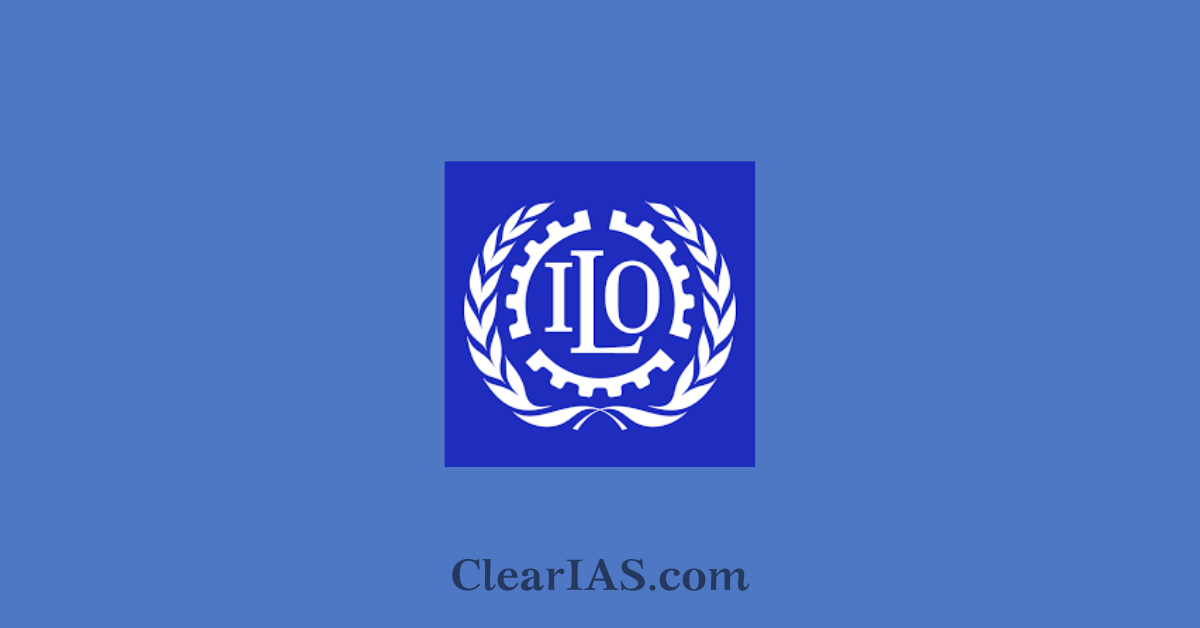 The World of Work report by the International Labour Organization (ILO) has been released. Read here to know more about ILO and the report.

Recently, the International Labour Organization (ILO) released the 9th Edition of the ILO Monitor on the World of Work Report.

International Labour Organization (ILO) is the only tripartite U.N. agency established in 1919.

The ILO brings together governments, employers, and workers of 187 member States, to set labour standards, develop policies and devise programs promoting decent work for all women and men.

The main aims of the ILO are to promote rights at work, encourage decent employment opportunities, enhance social protection and strengthen dialogue on work-related issues.

The organization has played a role in key historical junctures – the Great Depression, decolonization, the creation of Solidarność in Poland, the victory over apartheid in South Africa, and today in the building of an ethical and productive framework for fair globalization.

It was created in 1919, as part of the Treaty of Versailles that ended World War I, to reflect the belief that universal and lasting peace can be accomplished only if it is based on social justice.

The Constitution of the ILO was drafted in early 1919 by the Labour Commission, chaired by Samuel Gompers, head of the American Federation of Labour (AFL) in the United States.

It was composed of representatives from nine countries: Belgium, Cuba, Czechoslovakia, France, Italy, Japan, Poland, the United Kingdom, and the United States.

The process resulted in a tripartite organization, the only one of its kind, bringing together representatives of governments, employers, and workers in its executive bodies.

The driving forces for the ILO’s creation arose from security, humanitarian, political and economic considerations.

Reflecting these ideas, the Preamble of the International Labour Organization’s Constitution states:

In 1946, the International Labour Organization (ILO) became a specialized agency of the newly formed United Nations.

From 1948-1970, the number of Member States doubled and the Organization took on its universal character. Industrialized countries became a minority among developing countries, the budget grew five-fold and the number of officials quadrupled.

The ILO established the Geneva-based International Institute for Labour Studies in 1960 and the International Training Centre in Turin in 1965. The organization won the Nobel Peace Prize on its 50th anniversary in 1969.

The ILO played a major role in the emancipation of Poland from dictatorship by giving its full support to the legitimacy of the Solidarnosc Union.

In the post-cold war period, ILO emphasized the importance of placing social justice at the heart of international economic and social policies.

1999 underlined work as an instrument of poverty alleviation and the ILO’s role in helping to achieve the Millennium Development Goals, including cutting world poverty in half by 2015.

‘Decent Work for all is possible but societies have to make it happen’- It is precisely with this imperative that the ILO established its Global Commission on the Future of Work as part of its initiative to mark its centenary in 2019.

The ninth edition of the ILO Monitor on the ‘World of Work’ found that after significant gains made during the last quarter of 2021, the number of hours worked globally dropped in the first quarter of 2022.

This means that about 11.2 crore jobs might have been lost during this period, according to the report.

The fresh lockdowns in China, the conflict between Ukraine and Russia, and the global rise in the prices of food and fuel are cited as the main reasons for the findings.

Key findings of the ILO report:

The divergence between richer and poorer economies:

Recommendations in the report:

ILO has been proposing decent jobs and decent wages so that the purchasing capacity of workers is improved.

The ILO adopted a Global Call to Action for a Human-Centred Recovery from the Covid-19 crisis that is inclusive, sustainable, and resilient, providing a detailed set of recommendations addressed to governments, employers’ and workers’ organizations, and the international community.

Timely and effective support is needed to protect and maintain the purchasing power of labour income and overall living standards.

Macroeconomic policies are needed to combat inflation emerging as a policy challenge.

To promote recovery over the longer term, well-designed sectoral policies are needed to promote the creation of decent jobs, while aiming at formalization, sustainability, and inclusiveness.

The International Labour Organization promotes Global Accelerator for Jobs and Social Protection for Just Transitions, with its aim of creating at least 400 million jobs by 2030, primarily in the green, digital and care economy, and extending social protection floors to over 4 billion people currently not covered, is an important initiative.

Q. International Labour Organization’s Conventions 138 and 182 are related to (2018)