National Infrastructure Pipeline (NIP) is the Government of India’s roadmap to make India a 5 trillion dollar economy by 2024-25 by spending 100 lakh crore in infrastructure projects.

Along with slowing growth, more-than-desirable inflation raises the fear of a condition called stagflation. In an economy burdened with stagflation, there will be an unusual rise in the price of various commodities even when the demand is low. However, due to low demand, the production falls, which may result in mass unemployment.

National Infrastructure Pipeline (NIP) is a mega push to infrastructure investment by the Central Government adding up to ₹102 lakh crore over the next five years.

What is the National Infrastructure Pipeline (NIP)?

National Infrastructure Pipeline (NIP) is a roadmap for an investment of Rs.100 lakh crore in infrastructure over the next five years (2020-2025).

The aim of the National Infrastructure Pipeline (NIP) is to help make India a $5 trillion economy by 2025.

The roadmap of Infrastructure Spending: Prepared by a Taskforce

To implement an infrastructure program of the scale of Rs.100 lakh crore (1.4 trillion dollars), it is important that projects are adequately prepared and launched. In pursuance of this, an annual infrastructure pipeline would be developed.

To achieve this task, a Task Force under the chairmanship of Secretary, Department of Economic Affairs has been constituted by Union Finance Minister to draw up a National Infrastructure Pipeline for each of the years from FY 2019-20 to FY 2024-25.

The first meeting of the Task Force was held in September 2019. This exercise is expected to be followed up by a periodical review process.

NIP will enable a forward outlook on infrastructure projects which will create jobs, improve ease of living, and provide equitable access to infrastructure for all, thereby making growth more inclusive.

National Infrastructure Pipeline: Major Expenditure to be on Energy and Roads

It is expected that projects of certain states, who are yet to communicate their pipelines, would be added to the pipeline in due course. 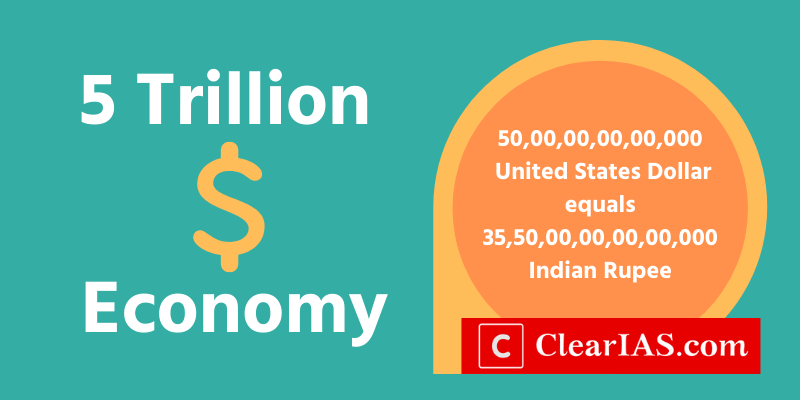 Prime Minister Narendra Modi had declared that he wanted India to be a “$5 trillion economy” by 2024 when he once again faces reelection. This would, he said, be “challenging, but achievable.”

In the 2019 Independence Day speech made by Prime Minister Narendra Modi, a key announcement was the investment of Rs. 100 lakh crore in infrastructure over the next five years.

If the real GDP growth of India rises to 8% and the average inflation rate stabilizes around 4%, a nominal growth of 12 per cent may be the end result. This makes the dream of a 5 trillion dollar economy by 2024 possible.

However, as the target is in terms of the dollar, there are two major variables which can impact India’s growth towards achieving this target:

As the 5 trillion dollar target of GDP is calculated at current prices (which includes inflation), one may feel that India may achieve the target GDP, not because of increase in production (output) but due to the higher inflation rate. However, this may not be the case. With an increase in inflation, there will be a decline in the purchasing power of money. This may reduce consumption and thus may negatively impact GDP growth.

On the exchange-rate aspect, if the rupee depreciates further, it will adversely affect India’s GDP growth in dollar terms. If rupee starts appreciating against the dollar, it makes it easier to reach the target.