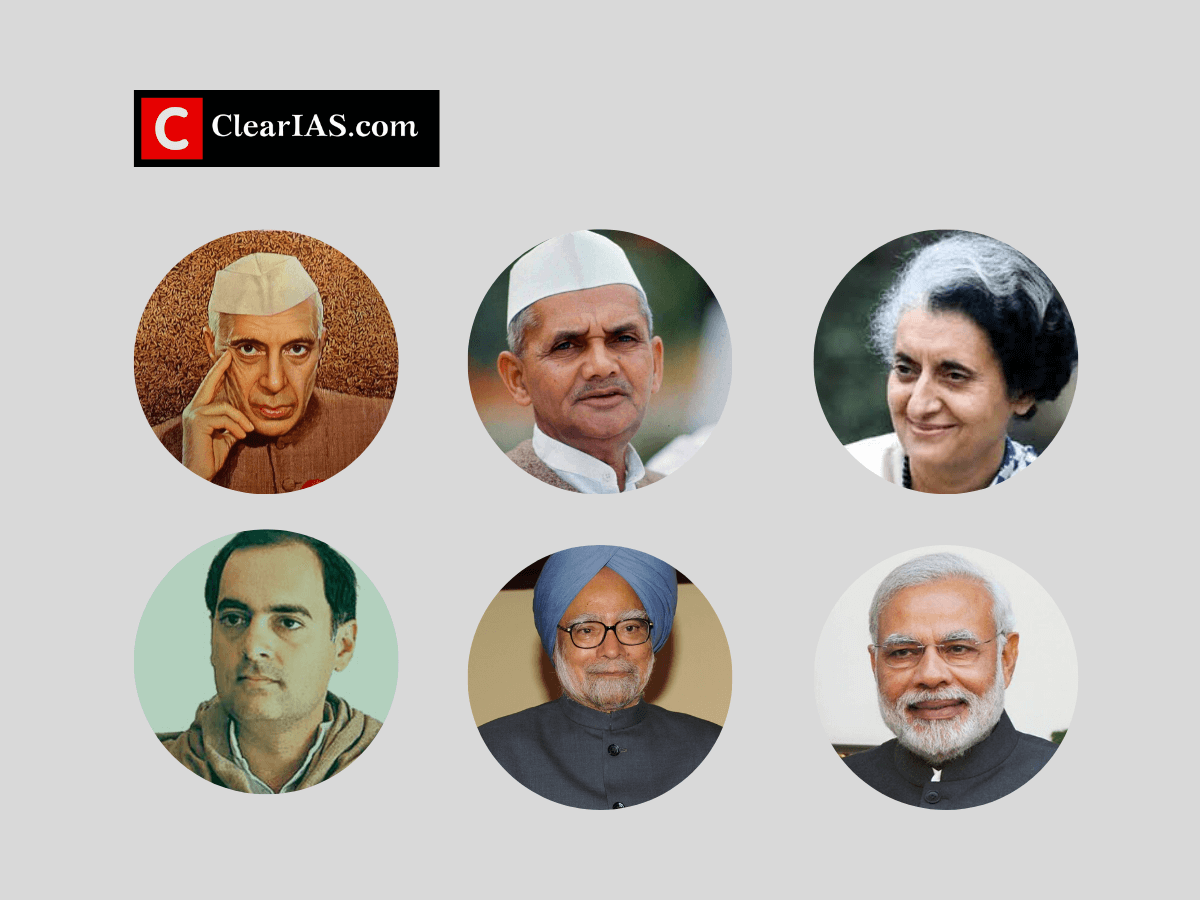 The Prime Minister of India is the leader of the executive of the Government of India. The prime minister is also the chief adviser to the president of India and head of the Council of Ministers. The Prime Minister (PM) can be a member of any of the two houses of the Parliament of India—the Lok Sabha (House of the People) and the Rajya Sabha (Council of the States)—but has to be a member of the political party or coalition, having a majority in the Lok Sabha.

Now let us see the personalities who served as Prime Ministers of India, in the chronological order.

Pandit Jawaharlal Nehru was an Indian freedom fighter who belonged to the Indian National Congress party.

He was the MP for Phulpur.

After independence, on 15 August 1947, Jawaharlal Nehru assumed office as the first Prime Minister of India and chose fifteen ministers to form the First Nehru ministry and was appointed by Lord Mountbatten.

The third Nehru ministry was formed on 17 April 1957 after the Indian National Congress won the 1957 general election with a vast majority. His term this time was from 17 April 1957 to 2 April 1962.

The Fourth Nehru ministry was formed on 2 April 1962 after the Indian National Congress won the 1962 general election. Nehru had been in the term of Prime Minister for a total of 16 years, 286 days.

Gulzarilal Nanda (4 July 1898 – 15 January 1998) was an Indian politician and economist who specialized in labour issues.

He was the Prime Minister of India for two short periods following the deaths of Jawaharlal Nehru in 1964 and Lal Bahadur Shastri in 1966.

He was awarded the Bharat Ratna, India’s highest civilian award, in 1997.

He was the MP for Sabarkantha.

He was a senior leader of the Indian National Congress political party.

He joined the Indian independence movement in the 1920s.

Following independence in 1947, he joined the Indian government and became one of Prime Minister Nehru’s principals, first as Railways Minister (1951–56), and then in a variety of other functions, including Home Minister.

He led the country during the Indo-Pakistan War of 1965.

His slogan of “Jai Jawan Jai Kisan” (“Hail the soldier, Hail the farmer”) became very popular during the war.

She was the second longest-serving Indian Prime Minister.

She was lauded as The Iron Lady of India, a nickname that became associated with her uncompromising politics and leadership style.

She went to war with Pakistan in support of the independence movement and war of independence in East Pakistan, which resulted in an Indian victory and the creation of Bangladesh.

Citing separatist tendencies and in response to a call for revolution, Gandhi instituted a state of emergency from 1975 to 1977 where basic civil liberties were suspended and the press was censored.

It was during this term, National Emergency was declared in India. Citing separatist tendencies and in response to a call for revolution, Gandhi instituted a state of emergency from 1975 to 1977.

He was an Indian independence activist and served as the 4th Prime Minister of India.

He led the government formed by the Janata Party.

He is the oldest person to hold the office of the prime minister, at the age of 84, in the history of Indian politics.

He served as the 5th Prime Minister of India.

Historians and people alike frequently refer to him as the ‘champion of India’s peasants.’

In 1980, she returned to power after free and fair elections.

After Gandhi ordered military action in the Golden Temple in Operation Blue Star, she was assassinated by her own bodyguards and Sikh nationalists on 31 October 1984.

He was an Indian politician who served as the 6th Prime Minister of India.

He took office after the 1984 assassination of his mother, Prime Minister Indira Gandhi, to become the youngest Indian Prime Minister at the age of 40.

Gandhi’s first action as Prime Minister was passing the anti-defection law in January 1985.

While campaigning for the elections, he was assassinated by a suicide bomber from the LTTE.

In 1969, he joined the Indian National Congress party and was elected as a member of the Uttar Pradesh Legislative Assembly. In 1988, he formed the Janata Dal party by merging various factions of the Janata Party. In the 1989 elections, the National Front, with the support of the BJP, formed the government and Singh became the 7th Prime Minister of India.

During his tenure as prime minister, he implemented the Mandal Commission report for India’s backward castes.

He headed a minority government of a breakaway faction of the Janata Dal with outside support from the Indian National Congress as a stop gap arrangement to delay elections.

The Indian economic crisis, 1991, and the Assassination of Rajiv Gandhi plunged his government into crisis.

He is the first Indian Prime Minister who has never held any Government office.

He was an Indian lawyer and politician who served as the 9th Prime Minister of India from 1991 to 1996.

He is often referred to as the “Father of Indian Economic Reforms”. He employed Dr. Manmohan Singh as his Finance Minister to embark on historic economic transition.

He accelerated the dismantling of the License Raj, reversing the socialist policies of Rajiv Gandhi’s government.

A B Vajpayee was a member of the Bharatiya Janata Party (BJP).

In the 1996 general elections, no party won enough seats to form a government. When the United Front, a coalition of regional parties, formed the central government with the support of the Congress, Deve Gowda was unexpectedly chosen to head the government and became the 11th Prime Minister of India.

He served as the 12th Prime Minister of India from April 1997 to March 1998, heading Janatha Dal (United Front) government.

In 1976, Gujral worked as the Ambassador of India to the Soviet Union. In 1996, he became the Minister of External Affairs in the Deve Gowda Ministry. He is known for the ‘Gujral doctrine’.

His tenure as PM lasted only for less than a year.

During his tenure as prime minister, India carried out the Pokhran-II nuclear tests in 1998. Vajpayee sought to improve diplomatic relations with Pakistan, travelling to Lahore by bus to meet with Prime Minister Nawaz Sharif.

After the 1999 Kargil War with Pakistan, he sought to restore relations through engagement with President Pervez Musharraf, inviting him to India for a summit at Agra.

His 2nd term lasted only for 13 months.

He was the first Indian prime minister not of the Indian National Congress party to have served a full five-year term in office.

He is an Indian economist, academic, and politician who served as the 13th Prime Minister of India.

He initiated a controversial demonetisation of high-denomination banknotes during his first term. Modi had also begun a high-profile sanitation campaign and brought many reforms in environmental and labour laws.

He is the first prime minister outside of the Indian National Congress to win two consecutive terms with a full majority.