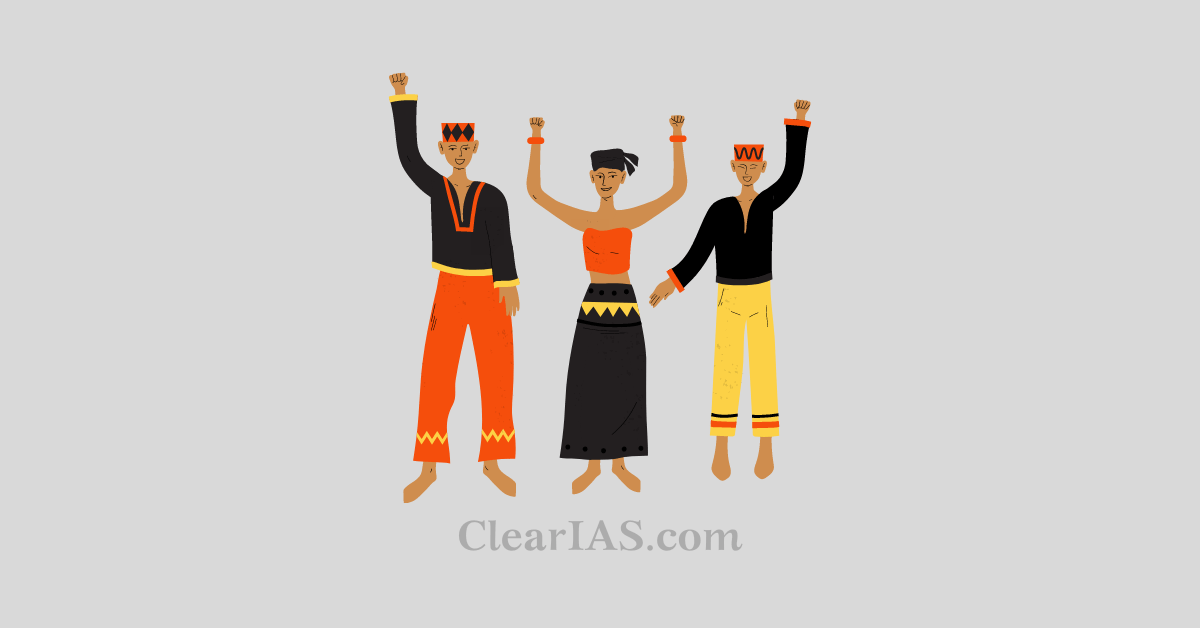 Scheduled Tribes: Who are they?

The framers of the Constitution took note of the fact that certain communities in India were suffering from extreme social, educational and economic backwardness.

They needed special consideration for safeguarding their interests and for their socio-economic development.

These communities were notified as Scheduled Castes and Scheduled Tribes as per provisions contained in Clause 1 of Articles 341 and 342 of the Constitution respectively.

What is a tribe?

The tribes are the autochthonous or native people of the land who are believed to be the earliest settlers in the Indian Peninsula. They are generally called Adivasis, implying original inhabitants.

The ancient and medieval literature mention a large number of tribes living in India.

India: A melting pot of races and tribes

India has one of the largest and diverse tribal populations in the world.

The tribal population in India according to the 2011 census is 104 million or 8.6% of the total population.

The majority of the scholars believe that earlier human races migrated to India from Africa, the Mediterranean, West Asia and Central Asia.

Since India was accommodative of various peoples and tribes, literary writers and scholars consider India as the cradle land for a number of human races.

The term ‘Scheduled Tribes’ first appeared in the Constitution of India.

Article 342 prescribes the procedure to be followed in the matter of specification of scheduled tribes.

The President may, with respect to any State or Union territory, and where it is a state, after consultation with the Governor thereof by public notification, specify the tribes or tribal communities or parts of or groups within tribes or tribal communities which shall, for the purposes of this constitution, is deemed to be scheduled tribes in relation to that state or Union Territory, as the case may be.

Thus, the first specification of Scheduled Tribes in relation to a particular State/ Union Territory is by a notified order of the President, after consultation with the State governments concerned. These orders can be modified subsequently only through an Act of Parliament.

Why the name “Scheduled Tribes”?

Specification of a community as Scheduled Tribes (ST)

The criterion followed for specification of a community, as scheduled tribes are indications of primitive traits, distinctive culture, geographical isolation, shyness of contact with the community at large, and backwardness.

This criterion is not spelt out in the Constitution but has become well established.

Growth of Scheduled Tribes in India

Article 342 provides for listing of scheduled tribes State/Union Territory wise and not on an all India basis.

PS: If you just need an overview of the major tribes, check another post of ClearIAS about Major Tribes in India.

Classification of  Tribes in India

(B) Classification of Tribes based on Ethnicity (Race)

B.S. Guha, former director of ASI, presented a scientific classification in 1944. He identified 6 main races which include,

(B) Classification of Tribes based on Location

The tribal population of India is spread all over the country. However, in Haryana, Punjab, Chandigarh, Delhi, Goa and Puducherry there exist very little tribal population. The rest of the states and union territories possess a fairly good tribal population. Madhya Pradesh registered the largest number of tribes. Based on the location they are divided into 4 zones.

They belong to Proto-Australoid group.

In the Chhotanagpur Plateau, along the dividing line between peninsular India and Indo-Gangetic basin, live many tribal communities like the Bhumij, Gond, Ho, Oraon, Munda, Santhal, Bhil, etc. This group occupy the mountain belt between Narbada and the Godavari – the central barrier that divides the north from the Peninsular India has provided a shelter for these tribes from very ancient times.

In the hills and converging line of the Western Ghats live the Chenchus, Irulas, Kadars, Ketas, Kurumbas, Jedas, etc. having Negrito, Caucasoid, and proto-Australoid features. This group is chiefly concentrated in the southern-most parts of the Western Ghats stretching from Vindhyas to Cape Comorin.

The aborigines of the Andaman Islands may be described as a race by themselves, and can be divided into two groups, i.e.,

Debate: Whether to preserve tribal culture or encourage their change?

Scheduled Tribes live in hilly, forested and semi-arid areas generally backward in terms of social and economic development and are considered negative areas from the point of view of supporting large population and economic growth. Since many tribal areas are rich in mineral and forest resources these have attracted non-tribal groups skilled in superior technology for exploitation. This has caused damage to tribal ecology and culture and generated another social tension. In fact, there is a great deal of debate whether to preserve tribal culture and its environs or to encourage their change keeping in mind the need of the hour.

PVTGs are more vulnerable among the tribal groups. In India, the tribal population makes up 8.6% of the total population.75 tribal groups have been categorized by the Ministry of Home Affairs as Particularly Vulnerable Tribal Groups (PVTG)s. PVTGs reside in 18 States and UT of A&N Islands.

They have a declining or stagnant population, low level of literacy, pre-agricultural level of technology and are economically backward. They generally inhabit remote localities having poor infrastructure and administrative support. Kondareddis in AP and Irulas in Tamil Nadu are classified as PVTG.

Composition of the National Commission for Scheduled Tribes (NCST)

Duties of the National Commission for Scheduled Tribes (NCST)

The Duties assigned to the Commission under 338A(5) are as given below:

The National Commission for Scheduled Tribes has been assigned certain additional functions vide the Ministry of Tribal Affairs Notification dated 23.8.2005 in the exercise of the powers conferred by sub-clause (f) of Clause (5) of Article 338A. These duties relate to measures to be taken:

Reservation is provided in educational institutions as well as jobs for Scheduled Tribes (ST) – Article 15 (4) and Article 16 (4).

Also, various laws are passed by the Indian Parliament for the protection of the life and livelihood of STs.

Tip: By eliminating option 3, one can easily arrive at the correct answer. 75 Tribal Groups have been categorized by the Ministry of Tribal Affairs as PVTGs.

With reference to the ‘Changpa’ community of India, consider the following statement: