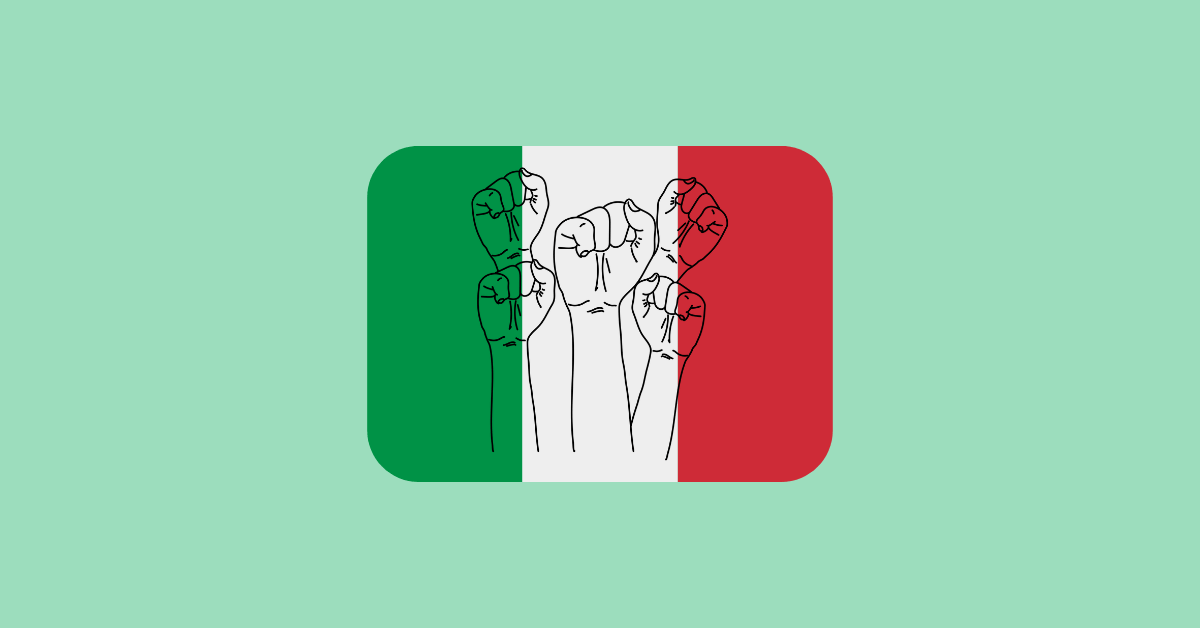 The unification of Italy is a significant moment in history. Read here to know about the events that unfolded in the process.

The unification of Italy was the 19th-century socio-political movement that resulted in the consolidation of different states of the Italian Peninsula into the Kingdom of Italy.

It is also known as the Risorgimento or Resurgence.

History of Unification of Italy 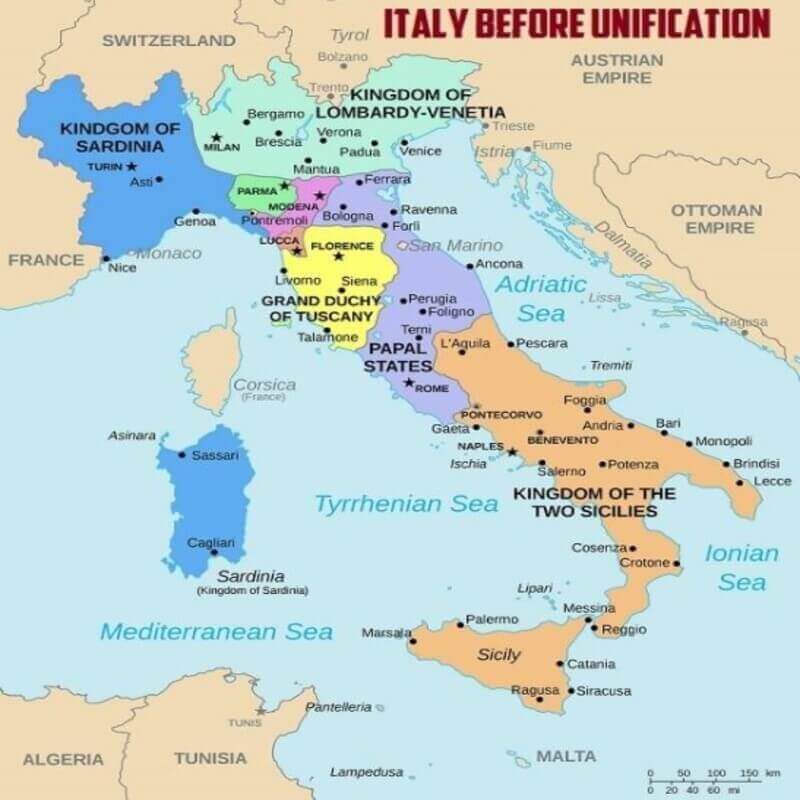 Italy was unified under the roman republic in the 3rd century BCE and remained so for about 700 years.

The invasion by Byzantine Empire eventually weakened the unity and many city-states sprung up. The northern half of Italy was under the control of the Holy Roman Empire (a German-speaking Empire) beginning in the 8th century while the central and the southern half were intermittently governed between the Kingdom of Naples, Kingdom of Sicily, and the Papal States.

After the Renaissance, the balance of power changed in the 15-16th centuries when the city-states of Milan and Venice became more powerful.  Constant wars began to be fought between the powerful city-states and Holy Roman Empire.

The accounts of those times were documented by leading Renaissance writers like Dante, Petrarch, Boccaccio, Machiavelli, and Guicciardini.

From 1494 to 1559, the Italian wars were fought between the French kings and Spanish opponents.

The Peace of Westphalia in 1648 formally ended the rule of the Holy Roman Emperors in Italy. However, the Spanish branch of the Habsburg dynasty, another branch that provided the Emperors, continued to rule most of Italy down to the War of the Spanish Succession (1701–14).

Italy remained fragmented in this way until the French Revolution of 1789.

The Habsburg rule in Italy came to an end with the campaigns of the French Revolutionaries in 1792–97.

Napoleon Bonaparte defeated the last emperor of the Holy Roman Empire in the battle of Austerlitz.

The French revolution introduced modern ideas into Italy and destroyed the old structures of feudalism. The intellectual and social upliftment that this period brought would help in the unification of the Italian peninsula in the future.

Napoleon placed foreign rulers on thrones in Italy which has always been opposed. Napoleon’s fall in 1815 again divided the city-states and the empire of Austria began to accumulate power.

The Italian intellectuals’ fuelled by nationalism by the revolution began to raise voices again the foreign involvement in Italy and a series of insurrections began to drive out foreign rule.

The congress of Vienna was an international diplomatic effort to reconstitute Europe after the fall of napoleon.

They restored the pre-Napoleonic system of several independent governments and again the Austrians and Hapsburgs became powerful.

The Italian people were not happy with this restoration of absolute monarchy hence leading to underground movements for freedom.

During the 1820s the Carbonari secret society tried to organize revolts in Palermo and Naples but with very little success, mainly because the Carbonari did not have the support of the peasants.

Giuseppe Mazzini, a patriotic writer set up a national revolutionary movement known as Young Italy (1831). Mazzini was in favor of a united republic. His ideas spread quickly among large segments of the Italian population. Young Italy’s revolutionary cells formed throughout the Italian peninsula.

After 1830, revolutionary sentiment in favor of a unified Italy began to experience a resurgence, and a series of insurrections laid the groundwork for the creation of one nation along the Italian peninsula.

The first revolt took place in the Kingdom of Sicily, which resulted in a constitution for the whole kingdom. A revolt in Rome forced Pope Pius IX to flee Rome and a republic was proclaimed.

Giuseppe Garibaldi (1807-1848) was a revolutionary who had taken part in the 1848 insurrection but had to go into exile when it failed. Garibaldi would later emerge as the face of Italian unification during this period.

The First Italian War of Independence was fought by the Kingdom of Sardinia (Piedmont) and Italian volunteers against the Austrian Empire and other conservative states from 23 March 1848 to 22 August 1849 in the Italian Peninsula.

Numerous insurrections took place all over the peninsula, but in the end, they were all crushed by the monarchical powers.

But the idea and spirit of the resurgence did not die with this defeat.

Count Cavour provided the leadership needed at this time. He was a modernizer interested in agrarian improvements, banks, railways, and free trade. He opened a newspaper as soon as censorship allowed it.

He became prime minister of Sardinia-Piedmont in 1852 and introduced modern ideologies of development. He encouraged trade and commerce, built railways, introduced the modern postal system and banking, patronized shipping, organized a new taxation system, curbed the power of the church, and reorganized the army on modern lines.

In 1855, the kingdom became an ally of Britain and France in the Crimean War, which gave Cavour’s diplomacy legitimacy.

He allied with Napoleon III and provoked the second Italian independence war of 1859 against Austria.

By early 1860, only five states remained in Italy: the Austrians in Venetia, the Papal States (now minus the Legations), the new expanded Kingdom of Piedmont-Sardinia, the Kingdom of the Two Sicilies, and San Marino.

The insurrection in 1860 became a success as Garibaldi and his army of Redshirts conquered the island of Sicily and Naples.

Meanwhile, the northern states had joined up with Piedmont-Sardinia and accepted Victor Emmanuel II as their King.

Garibaldi handed Naples and Sicily to him in November 1860 and by 1861 Italy was declared a kingdom.

Venetia was added to Italy in 1866 when Prussia defeated Austria in the Seven Weeks’ war. In that war Italy sided with Prussia and Venetia was its reward.

When the Franco-Prussian War broke out in 1870, Napoleon III had to withdraw his troops from Rome. The Italian government sent troops at once to take over Rome from the Pope. The citizens of Rome voted for a union with Italy which was declared the new capital city of Italy in 1871.

Thus, the Unification of Italy was completed.

The aftermath of the unification of Italy

The unification and governance were achieved entirely in terms of Piedmont’s interest.

The new Kingdom of Italy was structured by renaming the old Kingdom of Sardinia and annexing all the new provinces into its structures. The first king was Victor Emmanuel II, who kept his old title.

The new constitution was Piedmont’s old constitution. The document was generally liberal and was welcomed by liberal elements.

Its anticlerical provisions were disliked in the pro-clerical regions such as Venice, Rome, Naples, and the island of Sicily. Cavour had promised there would be regional and municipal, local governments, but all the promises were broken in 1861.

The first decade of the kingdom saw savage civil wars in Sicily and in the Naples region, which were all suppressed.

Many native Italians still showed dissatisfaction with the arrangement and there was always unrest in the kingdom which is also called Italian irredentism.

Italy entered the First World War in 1915 to complete national unity. It remained neutral at first but eventually agreed to join the war against central powers after the Treaty of London was signed in 1915.

Italy did not receive other territories promised by the Treaty of London, so this outcome was denounced as a “Mutilated victory”. The expression of “Mutilated victory” was adopted by Benito Mussolini which led to the rise of Italian Fascism, becoming the propaganda of Fascist Italy.

After World War II, the irredentism movement faded away in Italian politics.